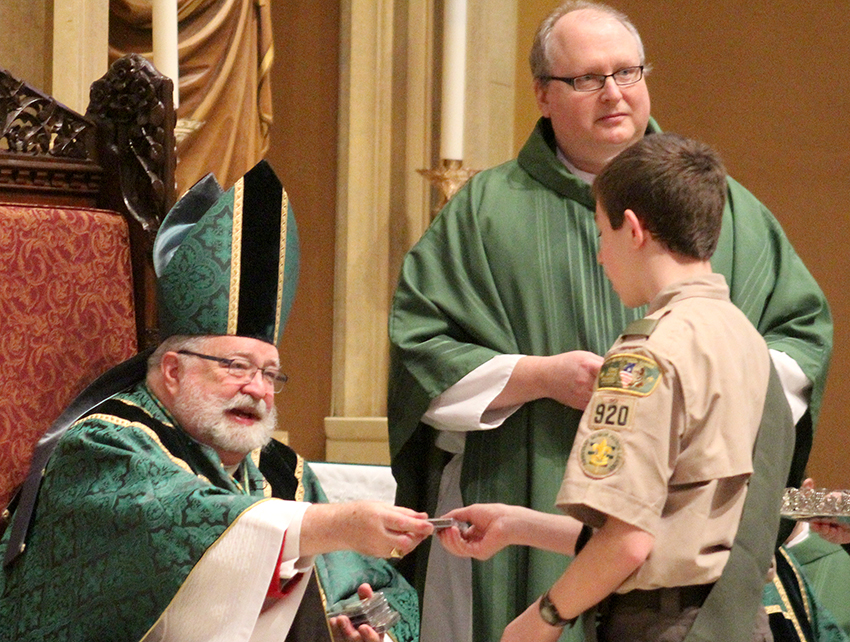 Bishop Daniel R. Jenky, CSC, presents the Ad Altare Dei emblem to Joey Leffers of Bloomington, a member of Troop 20 at Epiphany Parish, Normal. Leffers was one of dozens of Catholic Scouts or American Heritage Girls who earned religious emblems in the last year. (The Catholic Post/Jennifer Willems)

On a day when Scouts from around the Diocese of Peoria gathered to celebrate their accomplishments, Bishop Daniel R. Jenky, CSC, encouraged them to use their new skills well and often.

“In Scouting you are taught to be of service in this world, to make this world a better place, and you all do it in different ways,” he during his homily at the Diocesan Scout Mass on Feb. 10 at St. Mary’s Cathedral in Peoria. 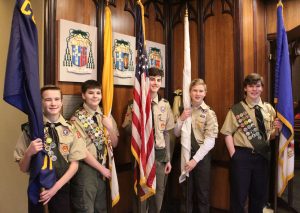 Aidan Flaherty, David Harris, Marcus Targos, Sean Magner and Phillip Rupert of Troop 156, which is based at St. Vincent de Paul Parish in Peoria, prepare to present the flags representing church, country and Scouting at the Diocesan Scout Mass. (The Catholic Post/Jennifer Willems)

Marveling at “all those badges,” the bishop reminded them there are a variety of badges for specific skills, just as every person has different gifts.

“We are very proud of you,” Bishop Jenky said. “You aren’t sitting in front of a computer or a TV set. You’re doing things. Keep that up all your lives and let Jesus, his word, his teaching, his example be a part of who you are and he will make whatever you bring to him an abundance, a marvelous, amazing catch.”

After Communion, the young men and women in uniforms were called forward to receive from Bishop Jenky the religious awards they had earned over the last year. While many were present at St. Mary’s Cathedral and took an active role in the liturgy as flag bearers, gift bearers and altar servers, there were still more who were unable to come that day, according to Linda Atherton of Champaign, who chairs the Diocese of Peoria Catholic Committee on Scouting. (See the complete list at the end of this story.)

After the youth received their awards, it was the adults’ turn.

Charles (Chuck) Jiardina of St. Mary in Bloomington and Pete Targos of St. Jude in Peoria received the Bronze Pelican Award for their longtime service and commitment to Catholic Scouting.

The St. George Emblem, which recognizes individuals for their significant contributions, was presented to Bob Graves of St. Maria Goretti in Coal Valley and Ben Rogers of Sacred Heart in Moline. (For more on Ben Rogers, see story here.) 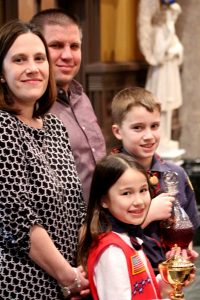 Kaitlyn and Nicholas Jelinek of Epiphany Parish in Normal, prepare to bring forth the gifts at the Diocesan Scout Mass at St. Mary’s Cathedral in Peoria on Feb. 10. Behind them are parents Jennifer and Adam Jelinek. The American Heritage Girl and Cub Scout would receive religious emblems later in the Mass. (The Catholic Post/Jennifer Willems)

This year, three local packs and three troops received the Pope Paul VI National Catholic Unit Excellence Award. Five of them achieved a gold level rating, and one was recognized at the silver level. (See the listing on this page.)

While the award has been around for a long time, it has been updated in recent years to include better ways to determine excellence, Atherton explained.

In following the model set forth by the Boy Scouts of America, for example, the National Catholic Committee on Scouting looks at 10 different points, such as is the unit growing? Are the Scouts involved in the religious emblems program?

“What the Boy Scouts have found is that the units are improving because they have measurable metrics to judge what they should be doing. Hopefully we’re going to find the same thing with Catholic Scouting,” Atherton said, noting that it means a lot to have six units in central Illinois recognized this year.

“I think it just says that we’ve been doing this well for awhile and now we have a more precise tool to document it,” she told The Catholic Post.

“It is outstanding is the only way I can put it,” said Mark Hilliard, packmaster for Pack 52 and assistant scoutmaster for Troop 52, both in Princeville. He said they spent three years working toward their gold level rating, which included making sure all of the Scouts and Cub Scouts have 100 percent of their religious awards.

“It’s an honor, but the more important thing is the Scouts have been helped,” said Cubmaster Tim Hendrickson of Pack 3925 of Epiphany Parish in Normal, which also received a gold level rating.

“You see a lot of people who are involved in Scouting, adult leaders, that are modeling service to others,” he said. “My hope is that someday, the Scouts that are in our units now will do the same when they grow up.”

Following is a list of Boy Scouts, Girl Scouts and American Heritage Girls from around the Diocese of Peoria who earned religious awards this year. While many of them were at St. Mary’s Cathedral for the Diocesan Scout Mass on Feb. 10, some celebrated at Scout Sunday Masses in their own parishes.

This list also includes adult leaders who were honored and the Scouting units that were recognized for excellence. 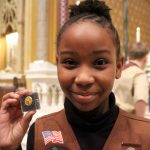 Piper Ledell of Troop 1106 at Epiphany Parish in Normal displays the “I Live My Faith” medal she received from Bishop Jenky. (The Catholic Post/Jennifer Willems)

I LIVE MY FAITH 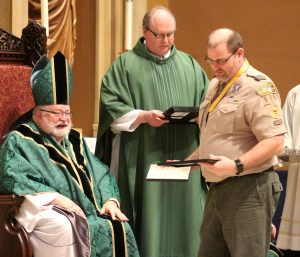 Bishop Daniel R. Jenky, CSC, smiles as Cubmaster Tim Hendrickson looks over the Pope Paul VI National Catholic Unit Excellence Award earned by Pack 3925. The pack, based at Epiphany Parish in Normal, was one of five packs or troops to be honored at the gold level this year. (The Catholic Post/Jennifer Willems)