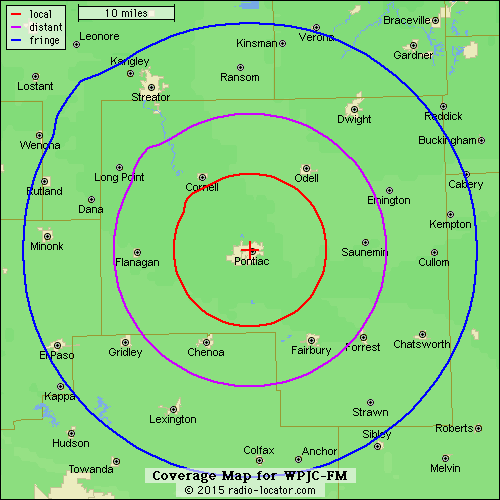 WPJC began broadcasting in 2003. Early on, it carried non-Catholic Christian programs and later, after acquisition by WPRR, mostly talk-radio programs.

The first WSPI-related broadcast from 88.3 FM was heard at 3:30 p.m. on Dec. 3 when Catholic Spirit Radio president and CEO Jon Hall established an internet-based link to the Pontiac station. This land-based link will soon be replaced by a microwave feed from the studio in Normal. 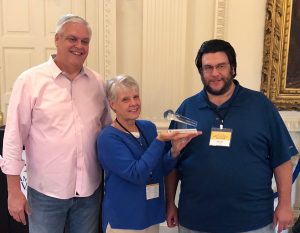 Ann Weber, an advisory board member for Catholic Spirit Radio, holds a leaded crystal microphone the station received for the 2018 Best Short Form Message Production at the annual EWTN Catholic Radio Conference in Birmingham, Alabama. The message, promoting teen listenership, was crafted by Weber, narrated by 13-year-old James Hinrichsen, and produced by Jon Hall (right), the president and CEO of Catholic Spirit Radio. To hear the clip, go to catholicspiritradio.com. (Provided photo)

The Pontiac station will be managed from the Catholic Spirit Radio’s Normal office.

A team of technical volunteers is now working to replace and reconfigure the broadcast equipment. Licensed for 2,500 watts and using a transmission tower in Pontiac, 88.3 FM is now broadcasting at less than 1,500 watts due to problems with one of the transmitter elements.

“We hope to have the station broadcasting at full power shortly,” Hall said.

Catholic Spirit Radio has been broadcasting since 2011 at 89.5 FM from an antenna located near Ellsworth, using a 7,000-watt transmitter. It has a low-power translator operating at 92.5 FM from within Bloomington that provides additional coverage.

WPJC stands for Praise Jesus Christ, and this will be done using the signal from WSPI. The WPJC transmitter expands WSPI’s listening coverage from 175,000 in and around McLean County to an additional 35,000 potential listeners, most of whom reside in Livingston County. The main benefactors will be parishioners in Pontiac, Flanagan, Chenoa, Lexington, and Fairbury.

Negotiations are now underway to acquire a low-wattage translator in Lincoln.

Catholic Spirit Radio officials credit the generosity of donors for enabling WSPI to reach more listeners with “the goodness, truth, and beauty of Catholicism” throughout central Illinois.

Tax-deductible contributions to support operations and future expansion may be made online at catholicspiritradio.com, or by a check sent to Catholic Spirit Radio, 108 Boeykens Place, Normal, IL 61761.