ROCK ISLAND — A framed icon of the Holy Family that has been utilized around the Diocese of Peoria for three years in conjunction with Knights of Columbus-sponsored programs has found a permanent home at Sacred Heart Church here. 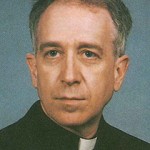 The image was presented to the parish by the Peoria Diocese Chapter of the Knights of Columbus during Sacred Heart’s 9 a.m. Mass on Sunday, Dec. 30, the feast of the Holy Family. It now includes a dedication inscription in memory of Father Johnjoseph DePorres Logan, a former pastor who served at several Quad City area parishes.  Father Logan, known for his support of families and devotion to St. Joseph as a model for Catholic men and fathers, died in early 2016.

The icon will be placed in the church’s new reconciliation room — a perfect location, according to Jack Swan, a past grand knight and current trustee of Allouez Council No. 658.

“What a tribute to Father Logan, for he was a great confessor,” said Swan in remarks at the Dec. 30 presentation.

Swan explained that periodically the Knights of Columbus makes available to dioceses a travelling icon for use in conjunction with prayer services and rosaries. The Holy Family icons, blessed by Pope Francis, were distributed in 2015 — the year the U.S. hosted the World Meeting of Families held in Philadelphia. A new icon of Our Lady Help of Persecuted Christians was recently introduced.

The Holy Family icon’s presentation in Rock Island corresponds with the Allouez Council’s establishment of a program encouraging Catholic families to consecrate themselves to the Holy Family. The program, instituted by the Knights’ Supreme Council, uses a prayer composed by Archbishop Willliam Lori, Supreme Chaplain.

Among those attending the Dec. 30 Mass at Sacred Heart Church were members of the Fathers of St. Joseph, a confraternity of men in the Quad Cities and beyond who strive to follow the example of St. Joseph. Father Logan was a leader in the group.