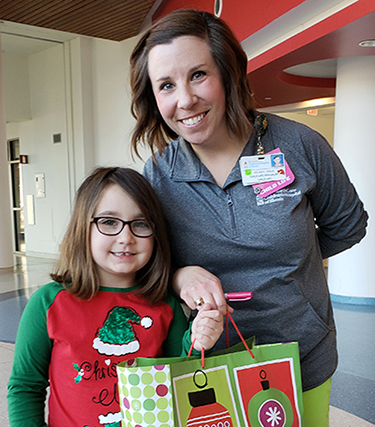 PERU — Like any superhero, Sierra Grace Biagioni has several aliases. Some call her Supergirl, which was her chosen costume for Halloween and the theme for her Nov. 2 birthday party a couple years ago.

This Christmas, however, the 6-year-old was known as Miss Claus, donating 54 $25 gift cards to OSF HealthCare Children’s Hospital of Illinois in Peoria. Rather than a sleigh, it was her parents, Nick Biagioni and Nickie Pellegrini, that brought her on her gift-giving mission Dec. 24.

She delivered the gift cards to Child Life Specialist Hilary Reiner with messages attached to each one, extending good wishes to the recipient. The notes were decorated with penguin clip art and said: “When you’re ready to waddle out of here, here’s a gift card so you can get something you love.”

Sierra, a kindergartner at Northview Elementary School in Peru and member of The Nativity of Our Lord Parish in Spring Valley, wrote “Merry Christmas” on the bottom of the notes, according to her mother.

“Being there is tough,” Pellegrini told The Catholic Post. “Nobody wants to be there anytime, but especially at the holidays.”

The family knows this from experience. On Easter Sunday in 2016, it was Sierra who was rushed to the Peoria medical facility to have a 5 centimeter brain tumor removed. Then 3, she spent eight days at Children’s Hospital and returned three times for two-night stays over the course of the next few months.

“She was awesome,” Pellegrini said. “The tumor was benign and they were able to get it all.”

While Sierra was recovering she received some gift cards and really enjoyed being able to go and pick out what she wanted. When she suggested doing the same thing for the young patients at Children’s Hospital, her parents were happy to oblige.

“We were thrilled. We love that she wants to do this,” Pellegrini said. “She enjoys it and it makes us happy and thankful that she’s thinking of that kind of stuff.”

They had been raising funds for the Children’s Hospital Foundation and thought this would be a nice way to do something different, “to give them something to look forward to when they got out of the hospital.”

The money to purchase the gift cards came from lemonade stands and bake sales hosted by Sierra and her two older sisters. Donations at a summer block party were also added to the pot.

Most of the gift cards were from Target, Walmart and Kohl’s, because they had good selections of toys and clothing, Pellegrini explained.

“We’re just so grateful that she’s healthy and able to do this,” said Pellegrini, the bookkeeper at Hall High School in Spring Valley. Nick Biagioni is a patrolman with the Peru Police Department.

“We know a lot of people are not nearly as lucky as we are. We’re grateful for the support we’ve been given and that we haven’t been back there for any real amount of time,” Pellegrini said. “We hope that we won’t have to either.”

Until next Christmas anyway.

“We will probably do it again next year,” she said.