For impoverished children, joy will arrive in 1,014 boxes from around our diocese 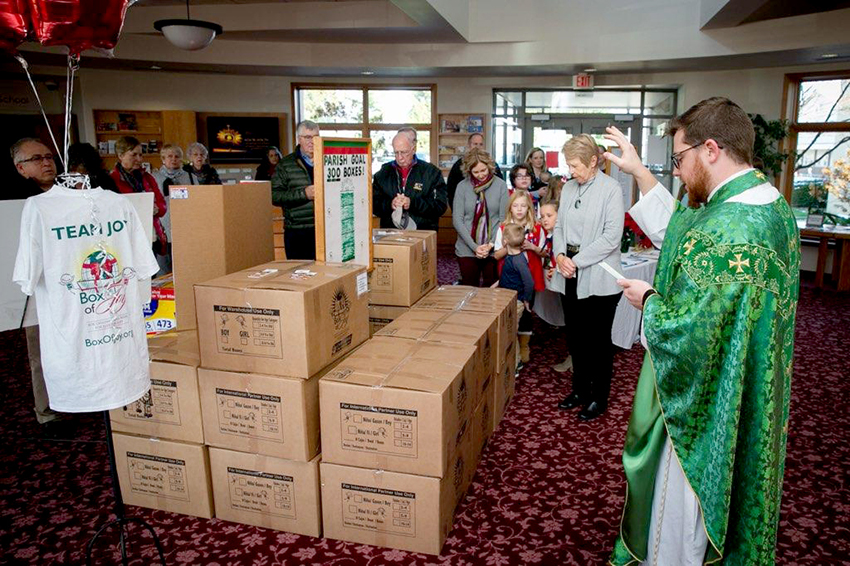 Father Andru O'Brien blesses the shipping boxes containing nearly 300 Boxes of Joy that were filled at St. Jude Parish and School in Peoria. The effort was organized by Marilyn Rusk, who stands to his right. The parish's donation helped to triple the number of Christmas packages that were sent to Cross Catholic Outreach from St. Joseph in Brimfield, which served as a drop-off site for the second year. (Provided photo)

Cross Catholic Outreach was hoping to put a Christmas smile on the faces of 70,000 children through this year’s Box of Joy program, and parishes around the Diocese of Peoria provided 1,014 of those smiles.

The program invites people to fill a shoebox-size container with gifts for a girl or boy in one of three age categories: 2-4, 5-9, or 10-14. A $9 donation sent with each box helps with the cost of shipping and supports charitable work where the child lives. 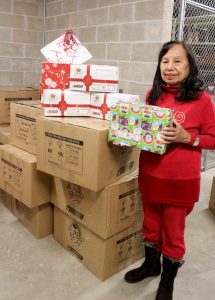 Nympha White, who chairs international concerns for the Peoria Diocesan Council of Catholic Women, shows just some of the 363 Boxes of Joy that the council collected for Cross Catholic Outreach. This is the first year the PDCCW was involved in the Christmas project. (The Catholic Post/Jennifer Willems)

St. Joseph Parish in Brimfield served as a drop-off site for the second year and at 651 tripled the number of boxes it was able to send to Cross Catholic for impoverished children in Haiti, the Dominican Republic, Guatemala, Nicaragua and El Salvador. Working with St. James in Williamsfield, its sister parish, St. Joseph also received Boxes of Joy from St. Anthony in Atkinson, St. Augustine in St. Augustine, St. Anthony in Bartonville, St. John the Baptist in Bradford, and St. Jude in Peoria, which supplied nearly half of the total.

“We were thrilled,” said Tina Windish, project coordinator for the Brimfield and Williamsfield parishes.

The boxes came from a variety of sources, including parishes, schools and religious education programs, according to Windish and White.

“They were excited,” White said, while preparing the boxes for shipping from the Spalding Pastoral Center in Peoria. “They were so generous.”

One of the participants told her, “We want them to have a nice Christmas,” while another said she would definitely do it again next year.

“It’s good that we could help,” said White, who said she liked the program’s global outreach.

Windish said they are careful to meet all the requirements for gift giving and shipping, but appreciates how Cross Catholic inspects every box to ensure everything is in order.

“We like the fact that Cross Catholic Outreach has crews that go and deliver the boxes themselves,” Windish added. “They make sure the boxes get to where they’re going.”

The total number of boxes was not available when The Catholic Post went to press on Tuesday. For more information, visit CrossCatholic.org/BoxofJoy.