Enrollment in the 42 Catholic schools of the Diocese of Peoria has declined by 307 students since last year, but there are some bright spots to be found among the numbers.

The enrollment for St. Bede Academy, which is owned and operated by the Benedictine monks of St. Bede Abbey, was not available for 2017-2018. This year it was reported that 277 students attend the Peru school.

The figure submitted to the National Catholic Educational Association includes St. Bede, however, for an official total of 10,488.

Dr. Susan Stolt, associate superintendent of Catholic schools for the Diocese of Peoria, said the dip in elementary enrollment included 95 preschool students — an age group that declined last year, too. There are 147 fewer students in kindergarten through eighth grade, she told The Catholic Post.

Like last year, 15 schools showed increases, while another stayed the same. But there were larger decreases in the schools where enrollment declined, Stolt said.

Jerry Sanderson, who also serves as associate superintendent of Catholic schools, noted that there were some “incredible success stories” around the diocese, too. Leading the way is Visitation Catholic School in Kewanee, where Sheila Cromien, principal, and Father Johndamaseni Zilimu, pastor, have worked together to increase enrollment by nearly 55 percent since 2013.

“In Kewanee, there’s great vision and great enthusiasm on the part of both the pastor and the principal and they’re a very solid team,” Sanderson said. “When you have the pastor and principal who work together so well and who have that common vision, great things happen.” 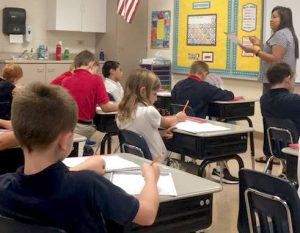 Among the efforts that have contributed to Visitation Catholic School’s success is providing twice-weekly Spanish classes for all students, starting in kindergarten, said Sheila Cromien, principal. The class is taught by Yasmy Blas. (Provided photo)

That common vision developed quickly, according to Cromien.

“Father and I both came in 2013,” she said. “We decided after our first year we didn’t want Visitation to close and we were going to do everything in our power to keep it open.”

In the last five years Visitation has grown by 54 students for a current enrollment of 158. They added 19 students since last year alone.

Cromien said their biggest classes are the 3-year-old preschool with 18, third grade with 19, and fourth grade with 18.

In addition to a “friendly, positive relationship” between principal and pastor, Cromien credits “running a good program” and good word of mouth by the parents for their success. That good program includes twice-weekly Spanish classes for all students, taught by Yasmy Blas, starting in kindergarten.

“It gives the kids a leg up when they get to high school,” Cromien said.

Sanderson added that St. Thomas in Philo has increased enrollment by 40.2 percent in the same time frame, and there have been increases at St. Jude in Peoria, up 48.1 percent; St. Paul in Odell, up 41.9 percent; St. Michael the Archangel in Streator, up 28.8 percent; and Holy Cross in Mendota, up 26.2 percent.

The Office of Catholic Education’s “Faith in Our Future” initiative, which began in 2013, has been responsible for much of this good news since it brought school, parish leaders and community leaders together to work on communication and develop a strategic plan.

Dr. Sharon Weiss, superintendent of Catholic schools for the Diocese of Peoria, said next steps include rebooting “Faith in Our Future” to help parishes update their strategic plans and recapture some of the energy that was present when it was launched five years ago.

“The path forward always begins with prayer, so a commitment to invoking the Holy Spirit and seeking the Spirit’s guidance — that will be critically important to our future success,” Sanderson said.