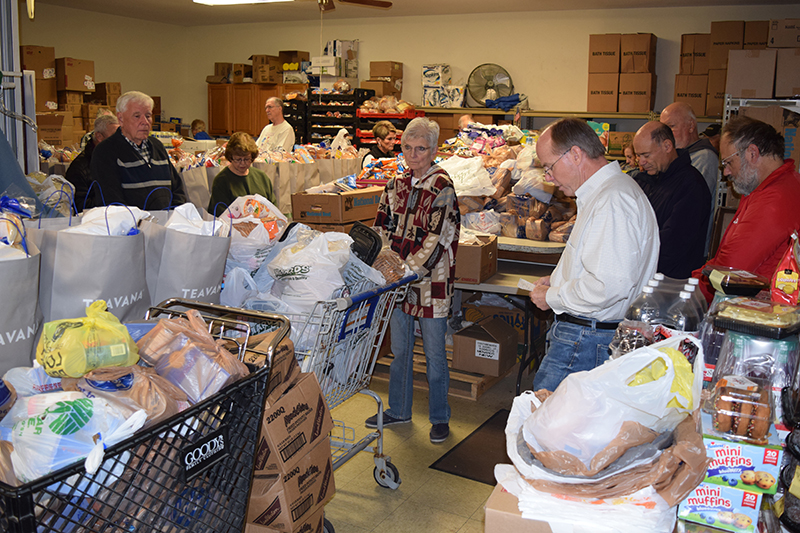 Heads bow as Steve Nolan leads volunteers in prayer before the opening of the St. Vincent de Paul Food Pantry at the Holy Trinity Parish Center in Bloomington on a recent Monday morning. Next spring, the busy pantry will leave its crowded quarters for a new home at the nearby former Holy Trinity Junior High School. (The Catholic Post/Tom Dermody)

BLOOMINGTON — It seems fitting  that nearly all the doors in the former Holy Trinity Junior High School building here are being widened as the building is transformed into a spacious new home for the food and clothing distribution projects of  the Society of St. Vincent de Paul’s Holy Trinity Conference.

For practical reasons, the door widening is necessary so pallets of supplies can enter and exit. And the volunteers at the St. Vincent de Paul Food Pantry — now based in a few rooms of the Holy Trinity Parish Center at 711 Main St. — move a lot of food, giving away more than 1.5 million pounds in the past 12 months. 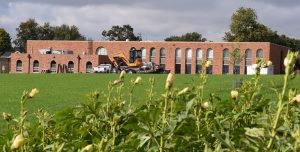 The former Holy Trinity Junior High School, 705 N. Roosevelt Ave. in Bloomington, is being renovated to serve as the distribution headquarters for the food pantry and clothing closet of the Society of St. Vincent de Paul’s Holy Trinity Conference. In the foreground is tall okra from St. Isidore’s Garden, another St. Vincent de Paul outreach. (The Catholic Post/Tom Dermody)

But from a spiritual perspective, the wider doors are symbolic of the pantries’ mission to welcome all who come for help — and to help — in Christ’s name.

“We serve anybody who comes to our door,” said Steve Nolan, a food pantry volunteer and project manager for the planned move to the former school, located two blocks to the west at 705 N. Roosevelt Ave. The St. Vincent de Paul Food Pantry at Holy Trinity is the busiest of its kind in McLean County, assisting more than 300 households each week.

To meet that kind of need — and now to raise funds to renovate the former school for its new purpose — the local St. Vincent de Paul conference opens its doors wide to volunteers, suppliers, and benefactors.

“Even though this is St. Vincent de Paul Holy Trinity Conference, we couldn’t do it without the entire Catholic community in Bloomington-Normal,” said Nolan. All five Twin Cities parishes are represented among the food pantry’s 160 volunteers, as are a few churches of other denominations.

“It’s not about the church that is the sponsor, it’s about the people we serve — fulfilling a need for people who are living week-to-week,” said Nolan. “People don’t see it as Holy Trinity’s pantry. It’s Bloomington-Normal’s.”

When the move to the former school building is completed next spring, the people who come to the food pantry or clothing closet — the latter has been housed in the Holy Trinity Church basement for three decades — will be served more efficiently. It will also be easier on the volunteers. 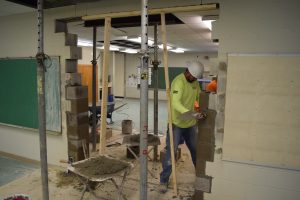 Because of small refrigeration, storage, and display spaces in the parish center, food that is donated now may be moved up to five times before it winds up in the bags handed out every Monday. That will change at the new location, where the former school gym will serve as the distribution area, and entire classrooms will be turned into refrigeration and freezer units. Two classrooms will display clothing, with a third classroom for clothing storage.

The junior high school building saw part-time use during the last year for parish religious education classes. Under a recently announced agreement, Holy Trinity Parish will lease the building — along with a tract of land on the former Central Catholic High School site — to the St. Vincent de Paul Society for $1 a year for five years, with the option to renew.

“Empty buildings are not good,” he told The Catholic Post. And they’re expensive to maintain. Tuite said the St. Vincent de Paul Society will likely spend $50,000 a year to operate the building, a cost that will no longer have to be borne by the parish. The food and clothing pantries will occupy the building’s first floor. The religious education classes will meet in second floor classrooms. 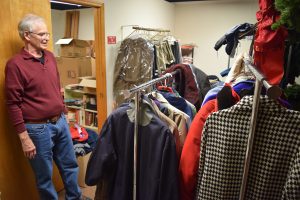 Everett Truttman looks over about 100 coats donated to the St. Vincent de Paul Clothing Closet in the basement of Holy Trinity Church. The coats came from a drive conducted by Epiphany Parish in Normal. The clothing closet will also move to the more spacious location next spring. (The Catholic Post/Tom Dermody)

The tract of land between the church and school, where the former Central Catholic High School once stood, is now home to St. Isidore’s Garden, another project of the St. Vincent de Paul Society that supplies a variety of fresh produce. According to Dorothy Deany, vice president of the conference who coordinates the garden with her husband Bernie, its bounty this year included 1,450 pounds of red tomatoes, 700 pounds of sweet potatoes, and generous amounts of radishes, onions, cucumbers, and okra.

The advantages of the move for the clothing closet, which has operated out of the Holy Trinity Church basement for 30 years, include not only more space, but a certainty of availability for the 60 clients served each week. Presently, if there is a funeral at the church, the clothing project can’t open.

“Funerals don’t get scheduled ahead of time,” said Everett Truttman, clothing coordinator. “We can’t let our clients know. They show up and find out we’re closed. We’ll avoid that problem.”

Truttman also anticipates that the clothing client list will grow when housed in the same building as the popular food pantry. He expressed gratitude to all who donate clothing, pointing to 100 coats that arrived that morning from a drive conducted by Epiphany Parish in Normal.

It will take about $350,000 to renovate the former Holy Trinity Junior High School to serve as the distribution center for the St. Vincent de Paul Food Pantry and Clothing Closet. About $100,000 has been pledged and $50,000 received to date.

Those wishing to make a donation may write a check to the Society of St. Vincent de Paul Holy Trinity Conference and mail it to the conference at 711 N. Main St., Bloomington, IL 61701.

This Tuesday, Oct. 30, the public can get a look at plans and progress at the former junior high school. The building site will be open for tours at 5 p.m., with refreshments served in the basement of the church.