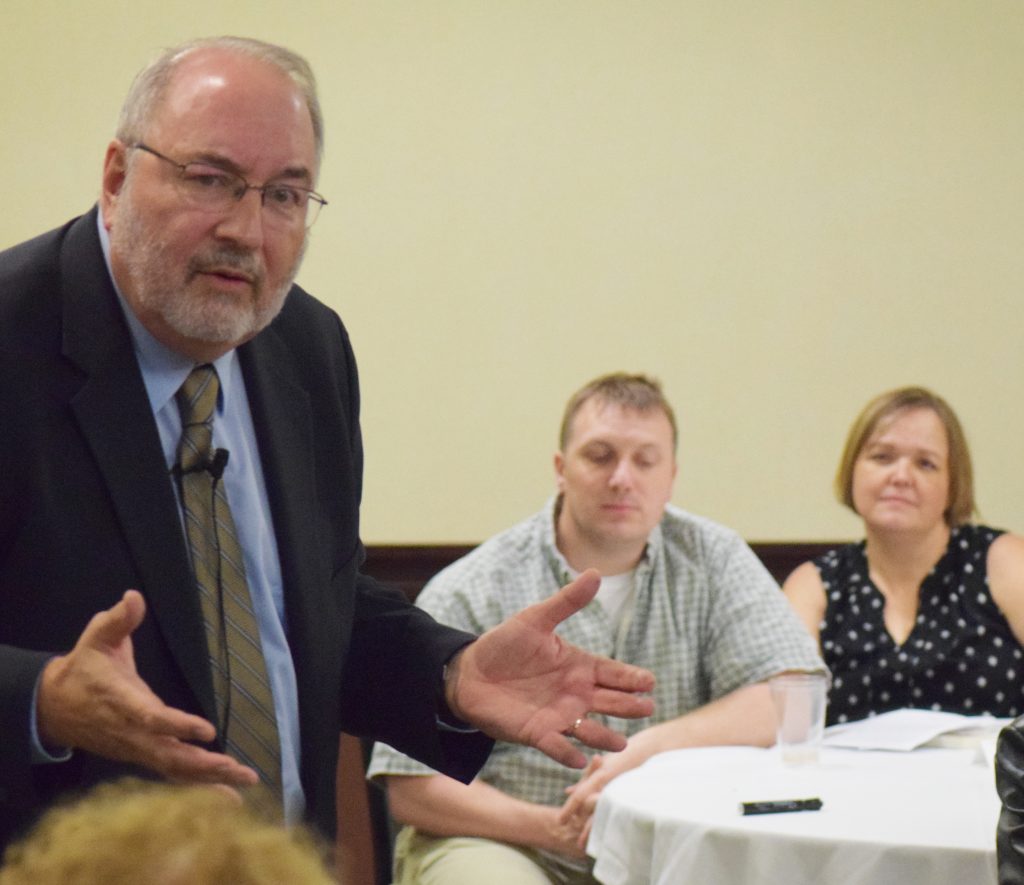 Jim Healy makes a point during his Sept. 29 presentation "How to be Married and Stay Engaged." The talk was part of a "date night" hosted by the Diocesan Council of Catholic Women at the Spalding Pastoral Center in Peoria. (The Catholic Post/Tom Dermody)

The dance of a Catholic marriage is a “sacramental three-step” modeled on the Paschal Mystery, a family life expert told couples on a date night Sept. 29 hosted by the Diocesan Council of Catholic Women.

“It happens over and over,” said Jim Healy of the process of loving, letting go, and rising again in marriage.

“It’s tough. It’s hard,” said Healy, director of the Center for Family Ministry of the Diocese of Joliet, during his presentation at the Spalding Pastoral Center in Peoria. “But we believe in a God who can lead us through it, who really knows how to die and rise.”

Living the Paschal Mystery is just one of the ways married couples “show the world what God’s love is like,” Healy said in his talk, “How to be Married and Stay Engaged.” The falling in love, dying, and rising happens in every marriage stage — engaged couples learn to give of themselves, new parents make sacrifices from sleep to finances, parents of adult children have to learn to let go, etc. But all of the sacrificial giving also bring some of life’s greatest joys.

Some see marriage as finding your “soulmate,” he said. But when times get difficult, doubts may arise whether the person is really “the one.” And so a new search begins.

“We’ve got something that will last your whole life,” said Healy, offering his own interpretation of St. Augustine’s “three goods of marriage” — sacrament, fidelity, and offspring. He labeled them back-to-back, face-to-face, and shoulder-to-shoulder, and said they are all ways married couples — including those who cannot have children — do their “job” of imaging God to the world.

“The whole marriage is just marriage prep for the real marriage between God and his people that lasts forever,” said Healy. He encouraged married couples to help one another — calling them a collective “vowed community” — and to keep their marriages a priority when other aspects of life (children, jobs, health issues, social media, etc.) compete for time and attention.