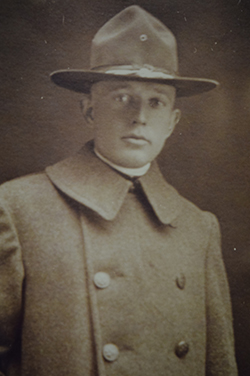 As this is written, exactly 100 years ago my life hung in the balance — though I would not be born for another four decades.

For on Oct. 9, 1918, on a hill near the Meuse River in the Ardennes region of northeastern France, a 23-year-old U.S. Army private from southern Illinois had just regained consciousness on a World War I battlefield following a shell explosion. His wits returning, the private began a desperate run to bring ammunition to his company’s gunner. Two German scouts to his left shouted at him to halt and took aim with their rifles.

“Zig-zagging up the hill, I must have zigged and zagged both at the wrong time,” he would later recall. One bullet hit him in the shoulder, severing nerves and rendering his left arm paralyzed. Another struck him in the right hand. The private continued to crawl up the hill, drawing fire from all directions.

“Bullets were kicking up dirt in my face and eyes and tearing through my uniform,” he wrote of that hellish scene. Somehow, the young private made it over the hill and into a woods. Following a trail of bodies, he came upon a few surviving American soldiers. They started down a road but did not make it far before they were captured by the Germans.

The battle was the Meuse-Argonne Offensive, a 47-day attack a century ago that would claim a staggering toll — some  28,000 German lives, 26,277 American lives, and an unknown number of French lives.

By God’s providence, it would not claim the life of Private Dermody. He would be freed at the war’s end after spending 58 days in a German prison camp, return home, and marry his sweetheart, Cleta — my grandmother. They raised four children, who in turn would parent 19 children, of which I am one. The subsequent generations number well beyond 100 souls.

So today I give thanks, and marvel at life’s mysteries.

Our Catholic faith embraces many mysteries — the Trinity, the Incarnation, the Eucharist, the workings of grace, Divine Providence, and many others. A great mystery took place a century and a year ago in Portugal, when after an appearance of the Blessed Virgin to three shepherd children, tens of thousands witnessed the sun dance in the sky near Fatima on Oct. 13, 1917.

There are mysteries of our faith and there are mysteries found in every chapter of our lives. Read the Anniversary Mass story on page 4 and ponder how married couples meet — including chance encounters like Bill and Julia Elmore taking the same Ozark Airlines flight in the mid-1960s.

Today, for me, the questions run deep. Why did my grandfather survive when tens of thousands around him perished? What if the bullets that struck or narrowly missed him had been fired inches in another direction? How many lives would have been altered, or not come into existence, had he been killed that day or on so many other close calls during the war? How many family trees were broken because so many did perish in that awful battle a century ago . . . or in the Las Vegas massacre a year ago . . . or in the Indonesian tsunami two weeks ago . . . or the New York limo accident a few days ago . . . or in an abortion facility today?

How much of our life is guided by the hand of God? How much is random chance? Will we know the answers, or care to, when we get to heaven?

Perhaps the best response is to live the phrase we’ve all heard: Life is fragile, handle with prayer.

And Grandpa, I think you zigged and zagged just right. May the prayer with which you ended your account of that awful time be answered: “God, please never let there be another war.” — Thomas J. Dermody