Catholic musician Greg Boudreaux asked the question moments after 300 people had spent an hour adoring Jesus in the Blessed Sacrament at Sacred Heart Church here during a 177 Project event on Thursday evening.

“Especially at this point in our church, especially at this moment in our history, with everything that’s going on in our culture, with everything that’s going on in our world, we need to be here. We need to be with Christ, and we need to be we each other,” added Boudreaux. The New Orleans native is one of 24 Catholic musicians taking part in a nationwide tour promoting eucharistic adoration, parish renewal, and the music of the various artists.

The 177 Project refers to the number of dioceses and archdioceses in the United States. During the next three months, the musicians — united under the umbrella “Adoration Artists” and paired in groups of two — plan to visit every diocese, presenting at least one worshipful evening that includes a Holy Hour of eucharistic adoration followed by a brief concert. 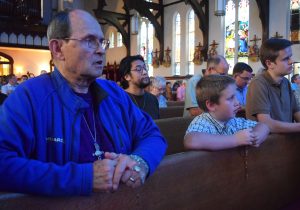 Deacon Patrick Murphy of Sacred Heart Parish in Moline prays with grandsons Colin and Brendan Parisot during a rosary that opened the 177 Project evening of eucharistic adoration and music at Sacred Heart Church in Rock Island on Sept. 20. (The Catholic Post/Tom Dermody)

The Diocese of Peoria hosted two such evenings this week. After the Thursday night gathering in Rock Island, Boudreaux and fellow Catholic musician Ben Wagner traveled to Champaign for a 177 Project event on Friday at St. John’s Catholic Newman Center on the campus of the University of Illinois.

The Rock Island evening opened with the recitation of the rosary led by Sacred Heart parishioner Gina Howell. Each decade of the Luminous Mysteries carried a special intention, including for church leaders, protection of the unborn and an end to abortion, the victims of Hurricane Florence, all involved in the 177 Project, and that all present grow closer to Jesus.

Then, with the church darkened except for blue-tinted lights in the sanctuary, the Blessed Sacrament in a monstrance was carried in a procession to the altar by Father Anthony Co, pastor of Sacred Heart Parish. During the Holy Hour that followed, Boudreaux and Wagner alternately played guitar softly or sang a praise song. The sacrament of reconciliation was offered throughout the evening.

“What a gift it is to have a night like tonight,” said Boudreaux, who normally tours and records with his wife, Lizzy, who is home expecting their second child, a son due in December.

Before singing three of his original songs, Boudreaux urged those attending to continue uniting in prayer and adoration.

“Let this not just be a one-time night,” he told the group from a microphone set up at the front of the church sanctuary. “It’s neat to have a night where we can come, have moody lighting and all this stuff happening, but you can always come here and sit before Christ and pray.”

Wagner told the group he did not begin playing guitar until his freshman year at Marquette University. Soon he was playing for campus Masses, and the group of musicians became so popular that students stayed long after Mass to hear more music. Among the selections Wagner played at Sacred Heart was “Bless the Midwest,” an ode to the beauty of this region of the country.

The evening at Sacred Heart was the first in the 177 Project for Boudreaux and Wagner. Asked later for his thoughts on the experience, Boudreaux guaranteed its success.

“As soon as Jesus is here and the Body of Christ — the people of God — are here, the mission is accomplished,” said Boudreaux. That mission?

“For the church to come back to the heart of Jesus in the Eucharist,” he said, noting that the prayerful gathering took place in a church dedicated to the Sacred Heart — “a heart that never stops beating its love for us.”

Other Catholic musicians now touring nationally as part of the 177 Project include Matt Faley, a graduate of Peoria Notre Dame who is now a Christian recording artist based in Indianapolis, and Marie Miller, a Curb Records recording artist who has performed at Catholic women’s conferences in the diocese.

EDITOR’S NOTE: For more on the 177 Project, including tour dates and locations as well as how to prayerfully and financially support the effort, click here.