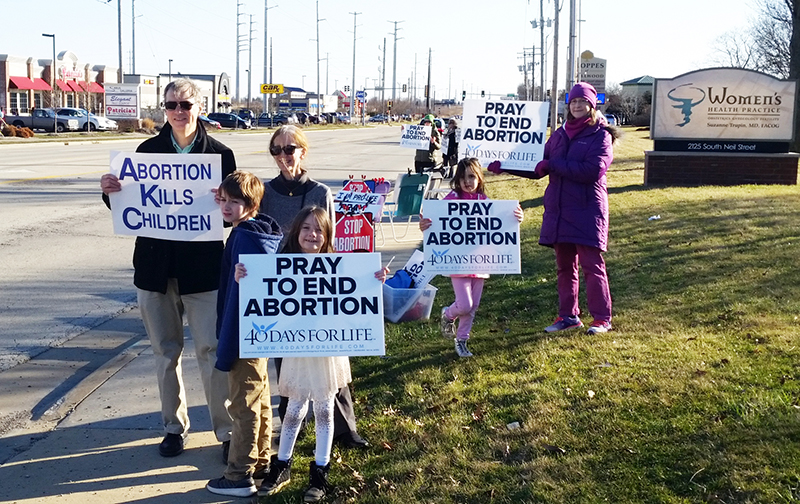 Mullen, a member of Holy Cross Parish, told The Catholic Post she hopes the rapidly spreading news will motivate even more people to “step out of their comfort zone a little bit” and take part in this fall’s 40 Days for Life campaign, which begins nationwide Sept. 26. In the Champaign-Urbana region, people are now invited to gather on the sidewalk outside the city’s other abortion provider, Planned Parenthood’s Champaign Health Center, which continues to offer chemical abortions early in pregnancy.

In addition to inviting participants to devote an hour to a constant vigil of prayer outside abortion facilities, 40 Days for Life also encourages fasting and community outreach to end abortion.

FROM TWO TO ONE

The Planned Parenthood facility, located at 302 E Stoughton St., had been the site of the local twice-yearly prayer vigils until last fall.

“We decided about a year and a half ago we would focus 40 Days for Life outside the Women’s Health Practice to try to increase awareness that Planned Parenthood wasn’t the only place in town performing abortions,” said Mullen. Women’s Health Practice is owned by Dr. Suzanne Trupin and offered surgical and chemical abortions in addition to multiple other services, such as obstetrics and gynecology.

So last fall and this spring, a small number of pro-life volunteers gathered for 40 days on the walk outside Women’s Health Practice, located in the 2100 block of busy South Neil Street. The high visibility site afforded the opportunity to invite more passersby to “think about what constitutes humanity and what abortion really is,” said Mullen, noting that many participants hold pro-life signs as they pray.

It was in planning this fall’s campaign that Mullen discovered that Women’s Health Practice had stopped providing abortions.

A call to the facility confirmed abortion services had stopped on April 1, “which would have been immediately after the spring 40 Days campaign,” said Mullen.

Mullen said she has not been able to speak to Dr. Trupin regarding the reason for the change, but another person connected with the facility said they were worried how the presence of “picketers” outside might hurt their obstetrics and gynecology business, which continues.

Mullen hopes the news will confirm that “peaceful, public prayer absolutely has a positive impact.”

“We will be out there praying again this fall no matter what,” said Mullen, noting that in Champaign-Urbana the prayer vigil is open between 7 a.m. to 7 p.m., seven days a week from Sept. 26 to Nov. 4. She has contacted area Catholic schools encouraging them to organize for students to join the effort.

Participants are asked to bring a lawn chair and sit and pray if they cannot stand, though Mullen has extra chairs as well as pro-life signs. Those not wishing to pray alone can contact Mullen who will provide a time when others are present.

To take part in 40 Days for Life in Champaign-Urbana, contact Mullen at (217) 607-0811, reneemullen1@comcast.net , or see the group’s Facebook page.  For more information on 40 Days for Life, visit 40DaysforLife.com.