WEST PEORIA — The national home of the Militia of the Immaculata has relocated to the Diocese of Peoria.

“It became clear to the National Council that this is where Our Lady wanted us to make a home,” said John Galten, national president of the worldwide organization that promotes total consecration to Mary. Founded in 1917 by St. Maximilian Kolbe, the Militia is an evangelization movement that has more than 3 million members in 48 nations. 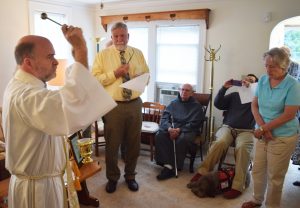 Father Miller began the blessing ceremony in the home’s living room. In the yellow shirt is John Galten, national president of the Militia of the Immaculata. (The Catholic Post/Tom Dermody)

Galten was in Peoria on Aug. 14, the feast of St. Maximilian Kolbe, to take part in a blessing ceremony at a small frame house at 2106 W. Heading Ave. in West Peoria. The house — owned by the Diocese of Peoria and formerly occupied in separate spans by members of two religious communities as well as FOCUS missionaries serving at Bradley University — will now be known as The Little Garden of the Immaculata.

Its sole resident is Antonella Di Piazza, national coordinator for the Militia of the Immaculata. Di Piazza, a native of Italy and a Father Kolbe Missionary of the Immaculata, edits the organization’s monthly newsletter, keeps its records, and coordinates volunteers. For the past two years she has worked out of the group’s temporary home in the office of a former Catholic school in Mundelein, north of Chicago.

“PERSISTENT” INVITATIONS
Presiding at the Aug. 14 blessing ceremony was Father William Miller, whose “persistent” invitations Galten credits as a key factor in the organization’s decision to relocate to Peoria. Father Miller is pastor of Corpus Christi, Immaculate Heart of Mary, and St. Patrick parishes in Galesburg, as well as Sacred Heart Parish in Abingdon.

“May this Little Garden of the Immaculata be guarded by angels and flourish under the protective mantle of Our Lady,” prayed Father Miller before sprinkling holy water throughout the home’s interior. He then led the 25 guests present in a procession around the outside of the house. The ceremony concluded at an outdoor statue of Mary where all recited a prayer of consecration to the Mother of God. 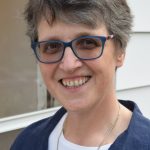 Galten opened the evening by explaining how the selection of Peoria as its permanent national home followed a yearlong national search. Sites recommended by membership ranged from a location near the National Shrine of the Immaculate Conception in Washington, D.C., to an invitation to occupy the second story of a building in Texas.

“The first story was a bar,” Galten recalled with a smile, declaring that site “unsuitable.”

Meanwhile, Galten “kept getting persistent messages from this priest in Peoria,” he said, acknowledging Father Miller. The group’s leadership liked that the house is small — “modest like the home at Nazareth” — is centrally located in the U.S., and that Peoria is the home diocese to Venerable Archbishop Fulton J. Sheen, “one of the great evangelizing figures of the last century.”

The “extraordinary welcoming and friendship” already experienced by Galten and Di Piazza confirmed the decision.

Those interested in Marian consecration, membership in the Militia of the Immaculata, or supporting its mission through donations or volunteerism are encouraged to write MI National Home-USA, PO Box 5547, Peoria, IL 61601, call (331) 223-5564, or email MINational@MissionImmaculata.com.

EDITOR’S NOTE: More photos from the blessing ceremony have been posted to The Catholic Post’s site on Facebook.