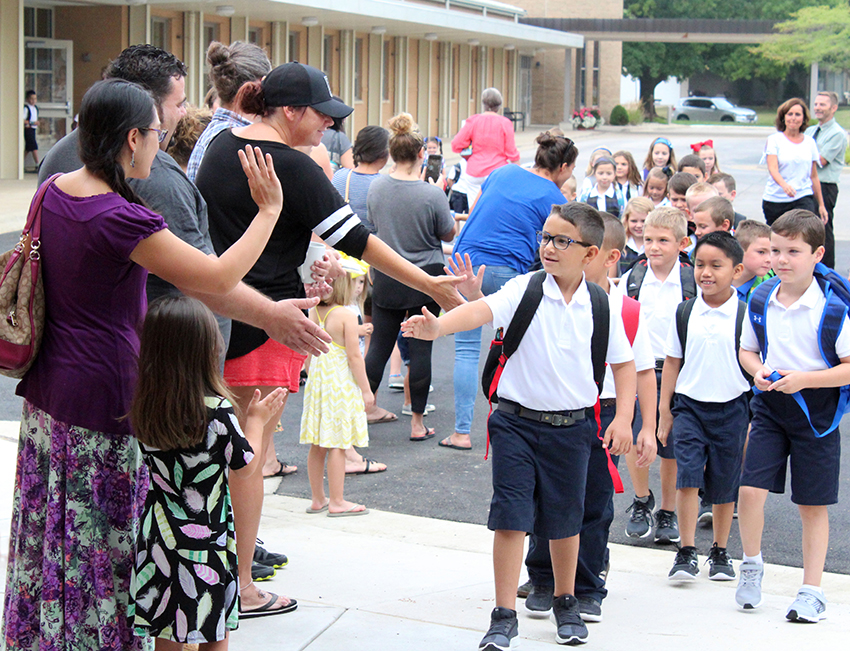 Second-grader Luke Khouri holds out his hand to greet well-wishers as students walked through the new entrance to Blessed Sacrament School in Morton on Aug. 16. (The Catholic Post/Jennifer Willems)

MORTON — Led by the eighth-graders, the students of Blessed Sacrament School walked into the new academic year by walking through the doors to the new school entrance on Aug. 16.

Parents, grandparents and Blessed Sacrament parishioners lined the path to the $3.7 million addition, offering hugs and high-fives as the students passed by. The adults followed and lingered to see what their hard work and sacrifices had accomplished over the last year. 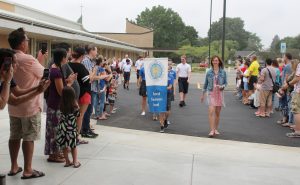 Surrounded by their parents, grandparents and parishioners, the eighth-graders at Blessed Sacrament School in Morton lead the way from the parish center to the school’s new entrance on Aug. 16. Accompanying them is teacher Sarah Mersot. The $3.7 million addition includes a new gym, school offices, kitchen and commons, computer lab and music room. (The Catholic Post/Jennifer Willems)

While they eagerly watched the building go up, it was the first time anyone had been inside the new facilities, which include a gym that can seat 500, school offices, a kitchen and commons area for lunch, a music room, a state-of-the-art computer lab, resource and tutoring rooms, and a concession area.

The addition isn’t quite finished, but Msgr. Gerald Ward, pastor, said everything is coming together quickly. Much of the space will be ready to use within the next week or so, and work on the new gym is expected to be completed by Oct. 1.

Before processing to the new entrance, the school community gathered in the parish hall for a decade of the rosary led by principal Mike Birdoes and a simple prayer of blessing by Msgr. Ward. The gym will be blessed when it is ready to use and a major celebration will be held when the second phase, construction of four new classrooms for preschool and kindergarten, are completed next year.

The new school entrance is completely different from the other parish entrances and has cameras, he explained. The doors are locked and parents and visitors will be allowed access by secretary Dawn Holzinger, who will check them in at the front office.

“Another big thing is when we have games going on, the school is locked out. You can’t get back to the school,” Msgr. Ward said. “That was the problem with the (old) gym — the school was completely open. The parish center was open. Now it’s separate.” 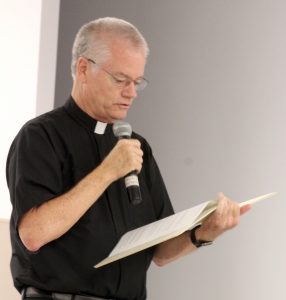 Msgr. Gerald Ward, pastor of Blessed Sacrament in Morton, read a prayer of blessing for the new school addition as classes started Aug. 16. He prayed that the Spirit of God would grant the students the gifts of wisdom and understanding, and that the teachers would share their knowledge with patience and gentleness. (The Catholic Post/Jennifer Willems)

Thanks to the generosity of the parishioners during the “Bringing to Completion the Good Work Begun” capital campaign, the current phase of construction has been paid for.

“They were very anxious to get a new gym and this space,” Msgr. Ward said.

The campaign will be extended, starting this fall, to raise the $1.7 million that will be needed for the second phase of construction.

“The building is tired. We need to upgrade the building,” Msgr. Ward said.

The contractor for both phases is Peoria Metro Construction Inc.

For two graduates of Blessed Sacrament School who are now school mothers, the new addition has exceeded their expectations.

“I was really shocked when I walked in here, because the growth is unbelievable,” said Tonya Khouri, whose son, Luke, is in second grade and daughters, Neva and Emily, are in first grade and kindergarten, respectively.

“As we are able to grow the school and update the school, our children will continue to grow,” she said. “It enhances their education. It sets them up for future success.”

A 1994 graduate who played sports in the old gym, Khouri said it will be sad to see it demolished but is excited for the opportunities the new gym offers. 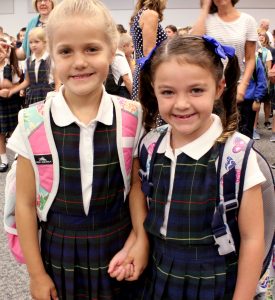 No jitters for best friends Lily Fulton and Brecklyn Westbrook, who hold hands as the first day of school at Blessed Sacrament in Morton begins Aug. 16. They would get a glimpse of the addition to the school as the students processed through the new entrance on their way to class. (The Catholic Post/Jennifer Willems)

JoLynn Weiler, the coordinator of advancement for Blessed Sacrament School and the mother of three students — Parker, second grade; Clayton, first grade; and Reed, kindergarten — is also an alumnus and a classmate of Khouri’s.

“Isn’t it beautiful? I’m so excited for it,” said Weiler, sitting in her new office. “It brings such a positive, optimistic energy for our future here at Blessed Sacrament that I think is just wonderful.”

While the new building offers great opportunities for the future, the core of what makes Blessed Sacrament a great school remains the same, she told The Post.

“I think what really makes our school so awesome is our families and our staff. We have really great teachers. We have great parents, great students,” Weiler said. “I really feel like we have the best students around. They’re all so positive and kind. Each of them is a leader in their own way. That makes me really excited.”

EDITOR’S NOTE: More photos from opening day at Blessed Sacrament have been posted to The Catholic Post’s site on Facebook.