Leave comfort places and ‘rise up,’ charismatics urged at conference 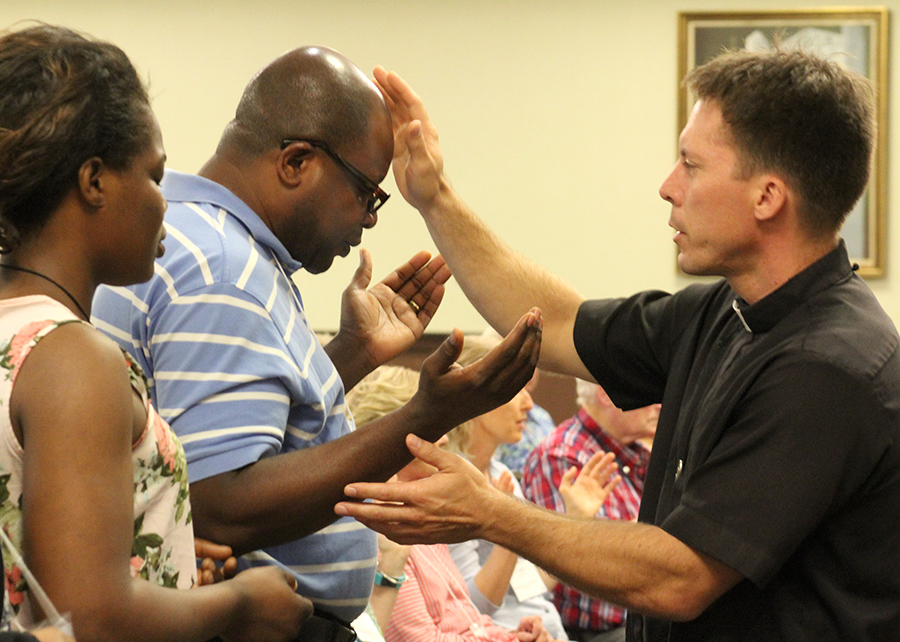 Dodo Soglohun of Christ the King in Moline is prayed over by Father Mark Goring as the healing service at the 32nd annual Catholic Charismatic Renewal Conference begins July 28. Many prayed to be baptized in the Spirit and come into a deeper relationship with the Holy Spirit during the afternoon service. (The Catholic Post/Jennifer Willems)

If members of the Catholic Charismatic Renewal of the Diocese of Peoria were ever tempted to be complacent, they were encouraged to get that notion out of their heads by a speaker so filled with the Holy Spirit that she bounced up and down.

“The first thing we need to do is come out of our comfort place,” said Maria Vadia as the 32nd annual Catholic Charismatic Renewal Conference opened July 28 at the Spalding Pastoral Center in Peoria. 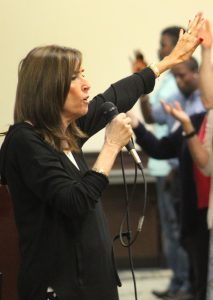 Speaker Maria Vadia invited participants at the 32nd annual Catholic Charismatic Renewal Conference to pray with her as she begans her keynote address July 28 at the Spalding Pastoral Center in Peoria. (The Catholic Post/Jennifer Willems)

“We Catholics are passive,” she said. “The Lord has given us the Holy Spirit. He is expecting us to rise up!”

“Jesus Christ, Light of the World” was the theme for the conference, which drew more than 180 people.

Vadia’s first keynote address, “Arise and Shine,” was based on Isaiah 60. Later in the day she would take conference participants “From Darkness to Light.”

More photos from this event have been posted to The Catholic Post’s site on Facebook.

Baptized in the Holy Spirit in 1987, she consecrated her life to preaching the Gospel. She does that through The Glory of God Foundation, which she founded, and as an active member of the Catholic Charismatic Renewal of the Archdiocese of Miami, Florida.

Also speaking at the conference was Father Mark Goring, a member of the Companions of the Cross, which is a charismatic community. Born in Canada, he is currently the director of the Catholic Charismatic Center in Houston, Texas.

Together Vadia and Father Goring prayed over people who wanted a baptism in the Holy Spirit and then participated in a healing service.

The gathering included a Holy Hour with eucharistic adoration. In addition, praise and worship leader Dan Dúet of San Antonio, Texas, led participants in a sung Chaplet of Divine Mercy.

Bishop Jenky’s homily set the stage for what would be discussed at the conference by reminding the charismatics that “Jesus reveals that preaching about the Kingdom of God produces a harvest that will be simply amazing.”

“A preacher or a teacher may do the sowing, but it is always the Holy Spirit that produces that huge harvest,” the bishop said in his homily. “So despite all obstacles, despite all opposition to Jesus Christ and to his Church, despite human sin and weakness, despite everything God himself will ultimately produce an astounding, stupendous harvest.” 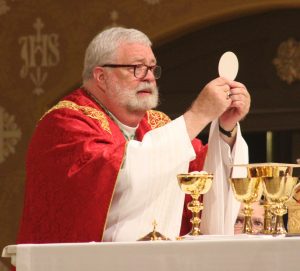 Bishop Daniel R. Jenky, CSC, welcomed the charismatics to St. Mary’s Cathedral in Peoria for the opening Mass of their 32nd annual conference, telling them “we need to be amazed and open our minds and hearts . . . to the unexpected plenitude of God’s Kingdom.” (The Catholic Post/Jennifer Willems)

What believers need to do is open their minds and hearts to the “unexpected plenitude of God’s Kingdom,” Bishop Jenky said.

“How many times do we start thinking too small when we try to imagine the greatness of God and the power of his Spirit,” he asked.

“After all, that same powerful and effective Word of God that changes ordinary bread and wine into the very Body and Blood of Jesus Christ can also change our lives into something entirely new,” he said.

Vadia continued to reassure and mobilize conference participants by saying there is no reason to be afraid because “Jesus has already defeated evil on the cross. We have the authority to stop the enemy.”

“We have to love people enough that we open our mouths and tell them about the Lord,” she said.

Vadia suggested making a list of their family members and people who still need Jesus and ask the Lord for the opportunity to help them and lead them to Christ.

“The Holy Spirit is always on the move,” she said. “Walking in faith means taking risks. We don’t like that. . . . But walking in faith bears fruit.”

In “Become Fire, Ignite Lives,” Father Goring talked about how he turned away from God to the “god of cool” and found his way back, sharing truths that he discovered along the way.

The first thing is that saying yes to evil and saying no to what is good drowns out God. Even though he was popular and well liked, deep down he was miserable, afraid and morally confused. 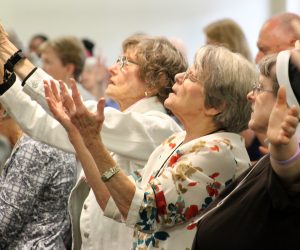 Pat Kozlevcar and Connie Dullard of Blessed Sacrament in Morton and Sister M. Faustina Chesnut, OSF, accept the invitation to pray during the 32nd annual Catholic Charismatic Renewal Conference. It was held July 27-28 at the Spalding Pastoral Center in Peoria. (The Catholic Post/Jennifer Willems)

Talking to his father, he confessed that when he prayed he felt like he was talking to a brick wall and wondered if that was normal or if he could actually experience God. The elder Goring pointed him to the lives of the saints, especially St. Francis of Assisi, St. Padre Pio, St. Teresa of Avila and St. Joseph of Cupertino, who would levitate whenever he contemplated God.

“They were totally in love with God to the point of foolishness,” Father Goring said. “I decided if I was going to believe in God, I wanted to be in love with him. That was the beginning of my change of heart.”

Getting on his knees, the young man began to pray and begged God to reveal himself to him. Eventually he found himself reading the Bible and taking Mass and the sacraments seriously.

“In the presence of God I knew who I was,” Father Goring said. “I remember saying to myself, ‘Don’t ever stop doing this.’”

He started losing his friends, but “because the power of God is so beautiful and touching me so deeply, I didn’t care.”

Father Goring said atheism is paradise lost, because we are made for the love, peace and joy that only come in loving and being loved by God.

“Today we worship a god of comfort and need,” he told his listeners. “Not until we allow Jesus to look on us and fill us with his love that we will come out of our tombs.”

As he finished his talk, Father Goring led those present through a renewal of their baptismal promises, rejecting Satan and his empty promises and once again declaring their belief in God, Jesus Christ and the Holy Spirit.

His homily at the closing Mass was his second opportunity to speak to conference participants. In it, he urged them to continue growing in holiness by going to confession and adopting a discipline of making small, consistent changes in their lives.

“Work on one thing a month,” he said. “Ask the Holy Spirit to show you one, small change that will make a difference in your life.”

In the end, we have to let the whole world know the good news we know, Father Goring said.

“We need to become genuinely holy and then take what we have and give it away,” he said.