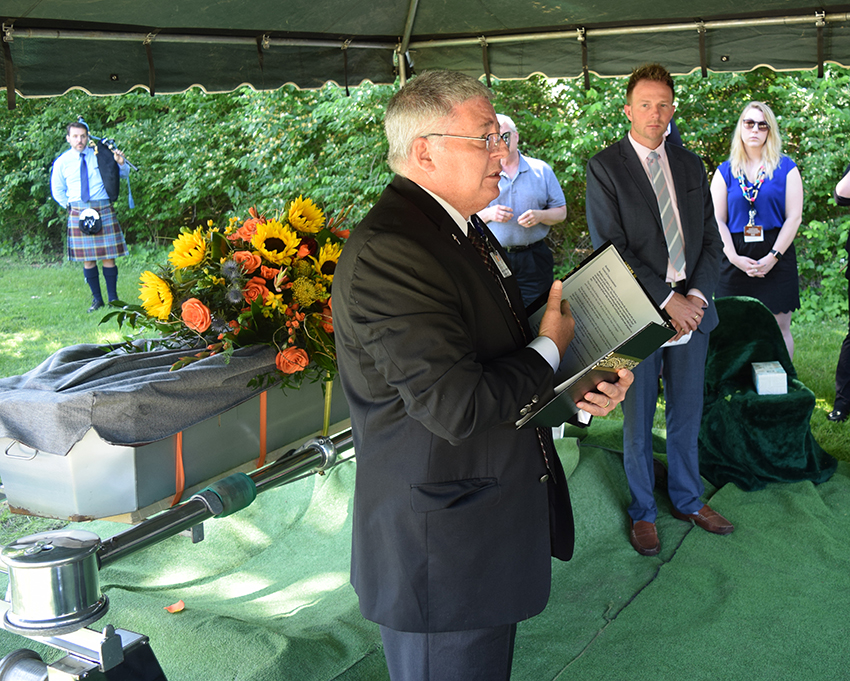 "May our farewell honor the dignity of their lives," prayed Deacon Joe Knapp, pastoral care manager at OSF HealthCare Saint Francis Medical Center in Peoria. Deacon Knapp is shown addressing about 50 people who gathered at St. Mary's Cemetery in West Peoria on May 24 for a burial service honoring the unclaimed, cremated remains of 13 individuals. Among those looking on is Peoria County Coroner Jamie Harwood. (The Catholic Post/Tom Dermody)

In death, the 13 individuals had no one to claim their bodies. In burial on May 24, more than 50 people gathered to prayerfully remember and honor their lives in a service at St. Mary’s Cemetery in West Peoria that the Peoria County Coroner would later call “the pinnacle” of his public service. 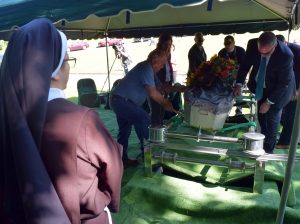 Sister Teresa Paul Selamat, OSF, looks on May 24 as pallbearers lower a metal box containing the unclaimed cremated remains of 13 persons to their common gravesite at St. Mary’s Cemetery in West Peoria. (The Catholic Post/Tom Dermody)

In late 2016, shortly after his election as coroner, Harwood discovered the unclaimed, cremated remains of 14 persons in containers on shelves in a coroner’s office closet. Their dates of cremation went back as far as 32 years. Five more boxes of unclaimed remains would come to his office from funeral homes in ensuing months.

Publicity surrounding plans for the May 24 burial service resulted in some families coming forward to claim the remains of relatives. But no contacts have been found for the 13, whose cremated remains were placed together in a casket-sized metal container carried from the hearse to the gravesite by six pallbearers.

The county coroner called the service “beyond my imagination” and “collaboration at its best.”

“From the bottom of my heart and on behalf of these people behind me, I say thank you and God bless you all for coming here today,” said Harwood.

After reading a Gospel passage in which Jesus tells his disciples of the many dwelling places in His Father’s house, Deacon Knapp committed the individuals to Christ, asking God to forgive any times they “missed the mark in life” and “to open the gates of heaven to them.”

“May the crosses they have carried in this life become crowns of glory in eternal life,” he said.

Deacon Knapp said that while the mission of OSF HealthCare, operated by The Sisters of the Third Order of St. Francis, is to serve with the greatest care and love from life’s beginning to its final moments, the burial service “speaks to how we honor life beyond death.”

“The importance of burial of the dead is found throughout Scripture,” said Birgitta Sujdak Mackiewicz, director of ethics at OSF Saint Francis. “It is a sign of respect for the person, of compassion, and of the person’s dignity.”

Among those attending the morning service in a tent erected in the lower level of the sprawling Catholic cemetery were John Truitt and his daughter, Julie Hallar. Truitt, now 84 and a member of St. Thomas the Apostle Parish in Peoria Heights, is the former director of the SHARE Food program in the Diocese of Peoria. His wife of 62 years, Mary, died a few weeks ago and is also buried in St. Mary’s Cemetery. 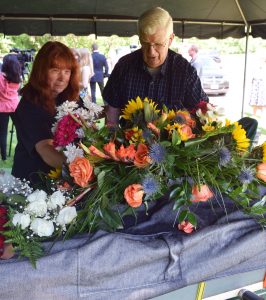 John Truitt and his daughter, Julie Hallar, place flowers atop the metal box containing the unclaimed cremated remains of 13 Peoria County individuals following a burial service at St. Mary’s Cemetery in West Peoria on May 24. “We wanted to come and share our love and our prayers,” said Hallar. (The Catholic Post/Tom Dermody)

“I was so surprised that there were people forgotten, that nobody has thought of, laying in a box somewhere,” Truitt told The Catholic Post. “I wanted to get out here and say my prayers for them.”

Truitt and his daughter brought flowers and, after the burial service, placed them atop the box of cremated remains next to a spray of roses and sunflowers that had been provided for the ceremony.

Eymarde Lawler of Peoria brought her Bible. And after Deacon Knapp’s final blessing concluded the service, she began to read aloud from Psalm 23 — her voice breaking several times with emotion.

Asked later why she was so moved at a service for people she did not know, Lawler said “it’s my relationship with the Lord. I know they are with Him.”

She then explained that her late father was a permanent deacon in the Diocese of Joliet and that “this is something my father would have done. He would have come here today.”

Deacon Bob Myers, diocesan director of Catholic cemeteries, said the plot was donated by St. Mary’s Cemetery and noted that burying the dead is one of the Corporal Works of Mercy.

“We’ve donated graves for other occasions when people just don’t have the money,” he told The Catholic Post. To preserve the families’ dignity, those with limited means may be asked to pay what they can for the opening and closing of the grave. St. Mary’s Cemetery is also the final resting place for the remains of babies who die through miscarriage, with services held quarterly, also in conjunction with OSF Saint Francis.

A temporary marker now marks the site of the 13 individuals whose cremated remains are unclaimed. It reads “In memory and honor of the indigent of our communities, may they rest in peace” and that heading is followed by the date of the burial service and this verse:

“Oft it is said, of these dead, ‘They’re unclaimed.’ Be ashamed to think so! Don’t you know, by each name, He lays claim to them all whom His call touched with grace? Now His face they behold and are told words divine: ‘Thou art Mine!’”

Deacon Myers said the cemetery plans to donate a flat, permanent headstone in the near future.

“Everyone deserves a final resting place,” said Harwood. “We have a lot to be proud of for all the people who came forward to help with this collaboration.”

EDITOR’S NOTE: More photos from the burial service have been placed on The Catholic Post’s Facebook site.