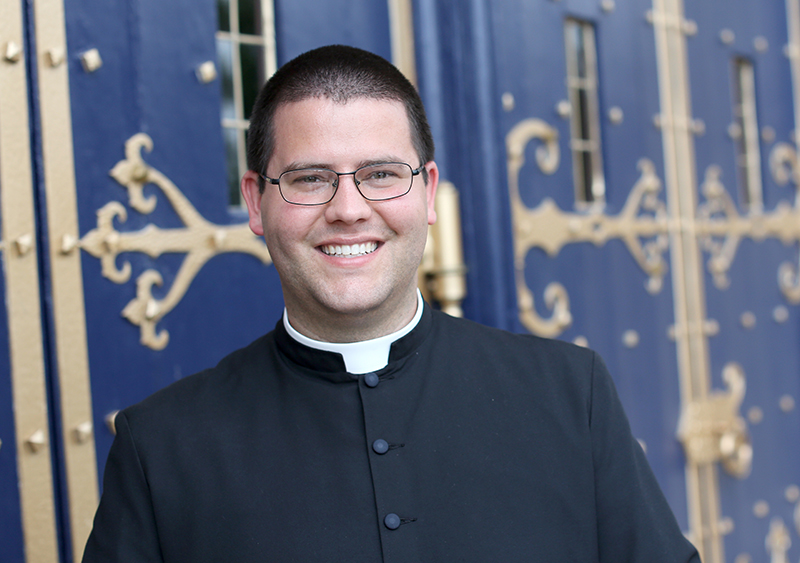 Deacon Ryan Mattingly will be ordained a priest of the Diocese of Peoria by Bishop Daniel R. Jenky, CSC, at St. Mary's Cathedral during a 10:30 a.m. Mass on Saturday, May 26. (Provided photo/Nellie Photography)

Deacon Ryan Mattingly has spent six happy and “blessed” years preparing for the priesthood at Mount St. Mary’s Seminary, but elements of his boyhood in a military family also helped ready him for what’s ahead.

“First, I’m used to moving around frequently,” said Deacon Mattingly, whose father, Troy, had a career in the U.S. Air Force.

From his birth in Fort Walton Beach, Florida, on Jan. 9, 1990, to his graduation 18 years later from Freeburg High School in southern Illinois, Deacon Mattingly and his family — which also includes mother Ann and younger sister Katina — have lived in three states as well as Germany.  In more recent years, Deacon Mattingly’s path led to the University of Illinois in Champaign, from which he earned a degree in economics in 2012; the seminary in Emmitsburg, Maryland; and summer assignments at parishes in Peoria, Aledo, Monmouth, Streator, and Pontiac.

The journey next takes him to St. Mary’s Cathedral in Peoria on Saturday, May 26, where Deacon Mattingly will be ordained to the priesthood by Bishop Daniel R. Jenky, CSC, along with Deacon Andru O’Brien.

The second way being in a military family prepared Deacon Mattingly for the life of a priest? “I’m used to having a large institution making decisions about your life,” he told The Catholic Post with a smile. “That’s all pretty normal for me.”

FAITH GREW AT U OF I NEWMAN CENTER

Deacon Mattingly’s decision to explore the priesthood came while a student at the University of Illinois. Residing at Newman Hall in his freshman year, he made friendships within a community of Christians and “began really living my faith for the first time.”

Specifically, it was while praying in the chapel during a retreat in the spring of his sophomore year that Deacon Mattingly got a sense of being called to the priesthood.

“I wrestled with it for the next year or so, but I couldn’t shake it and eventually I gave up trying,” he said. Guided by friends and campus ministers including Father Anthony Co — and realizing he could never commit fully to a future marriage if he didn’t first resolve his interest in a priestly vocation — he decided to enter the seminary after earning a degree in economics in 2012.

“My experience has been great,” he said of the past six years. He described Mount St. Mary’s as “150 men all on the same page, loving the Lord and trying to serve Him while preparing for the priesthood.” Every experience, whether joyful or challenging, “all in some way made me grow.”

A reading enthusiast, Deacon Mattingly also credits the book “The Soul of the Apostolate” by Dom Jean-Baptiste Choutard, OSCO, for deepening his spiritual life.

“I read it in college and it completely changed the way I looked at the church and how it acts in the world, and the importance of prayer and how it is the bedrock for any work that’s going to last,” said Deacon Mattingly.

DESIRE TO “BRING THE SHEEP BACK”

A prayer that he longs to hear is the prayer of consecration that Bishop Jenky will offer over the two priesthood candidates at the ordination Mass. “It’s really beautiful,” said Deacon Mattingly, and all the more meaningful because it’s the moment his priesthood begins.

Msgr. Thomas Mack will be his vesting priest at the Ordination Mass.

Father Mattingly’s first Mass will be at 10:30 a.m. on Sunday, May 27, at St. John’s Catholic Chapel in Champaign. Father Co will be homilist. A reception with light refreshments will follow.

Wherever his priestly journey takes him, Father Mattingly looks forward especially to offering the sacrament of reconciliation.

“I’ve always had a great longing or desire to hear confessions,” he said. “To bring the sheep back into the fold so they can participate in the Mass and receive all the gifts the Lord has prepared for us.”