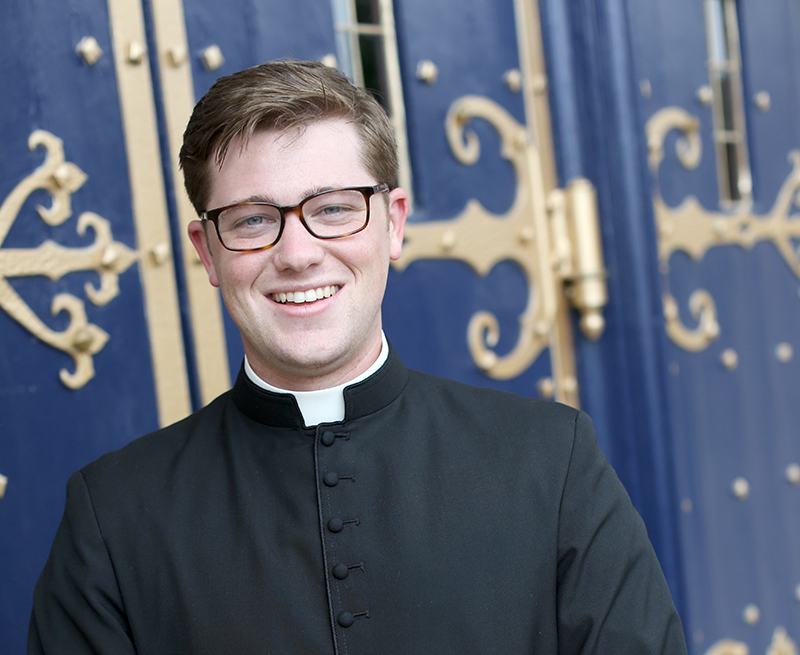 Deacon Andru O'Brien will be ordained a priest of the Diocese of Peoria by Bishop Daniel R. Jenky, CSC, at St. Mary's Cathedral during a 10:30 a.m. Mass on Saturday, May 26. (Provided photo/Nellie Photography)

Deacon Andru O’Brien says it’s probably a good thing he will have his face down when the priests of the Diocese of Peoria — one by one in a long line — prayerfully place their hands on his head during the Ordination Rite on May 26 at St. Mary’s Cathedral in Peoria.

“It’s a beautiful thing I’ve been thinking about a lot,” said Deacon O’Brien. “Realizing they’re sharing the same Spirit that has worked in their lives and they’re passing it on to me. I’ll probably be crying the whole time.”

Deacon O’Brien, who entered seminary in 2010 after graduating from Normal Community High School, said the diocese’s priests and seminarians are now “a true family for me.”

“It’s a special group,” he told The Catholic Post, explaining why it will be emotional when he and fellow ordinand Deacon Ryan Mattingly are welcomed by brother priests.

“I’ve been watching this now for eight years,” said Deacon O’Brien of the days of activities surrounding ordinations. “I’ve thought about every part of it at some point and how excited I am to experience it all.”

Those activities include meeting with Bishop Jenky at his residence on Thursday to learn first assignments; a picnic with priests later that evening; the Friday evening vigil where the new ordinands’ chalices are blessed; the sacred traditions of ordination day; and his first Mass on Sunday.

It’s a gift he began thinking about in high school while a member of St. Patrick Church of Merna in Bloomington.

The son of Scott and Tera O’Brien, Deacon O’Brien was born May 13, 1992 in Collinsville. The family — which also includes his younger sisters Abbi and Megan — would also live in Columbia and O’Fallon, Missouri, before moving to Bloomington.

At Normal Community High School, Andru was on the swim and baseball teams and was considering swimming at the collegiate level.  But then a “tapestry” of events changed his plans, beginning with his attending a Teens Encounter Christ retreat.

Friends from TEC invited him to go to daily Mass, and doing so “became my routine.” As he watched Msgr. Gerald Ward and Father John Cyr celebrate Mass at St. Patrick Church of Merna, he became curious about their lives.

He added weekly adoration of the Blessed Sacrament at Epiphany Parish in Normal and a friend, Joey Gruenwald — who at the time was considering priesthood — invited Deacon O’Brien to go on a seminary visit.

That conversation, he says, was the first time he considered the priesthood a real possibility. Though the seminary visit wouldn’t happen that year, “the tug was there and it hasn’t really left since.”

Deacon O’Brien and his friend Joey did, however, attend an Emmaus Days vocation retreat in the summer prior to his senior year in high school. A conversation there with Msgr. Brian Brownsey, then vocations director, was “the first time I was able to articulate what was going on inside of me,” recalled Deacon O’Brien. “I told him ‘I don’t know if I’m called to be a priest but right now I can’t see myself doing anything else.’”

In an ironic twist, this summer Father Andru O’Brien will preside at Joey Gruenwald’s wedding.

“We laugh about it now,” said Deacon O’Brien. “He was the one thinking about priesthood and invited me to tag along, and where we thought we would end up is completely different.”

Deacon O’Brien’s college seminary studies were at Immaculate Heart of Mary in Winona, Minnesota. He spent two years of theology studies at Mundelein Seminary in Chicago before completing his preparations at Mount St. Mary’s in Emmitsburg, Maryland.

In between were summer parish assignments in Peoria, LaSalle, Pontiac, Monmouth, and Oglesby. He also served as prefect of Emmaus Days, and spent some time in Georgia where his family now lives in an Atlanta suburb.

His parish experiences gave him confidence and “true joy” as he shared Christ. That joy will multiply as he is able to celebrate Mass and hear confessions. “I’ll be able to go into situations and no matter how people need Christ, I’ll be able to provide — both in counseling and sacraments,” he said.

His vesting priest at the ordination Mass will be Father Johndamaseni Zilimu. Father O’Brien’s first Mass will be at 3 p.m. on Sunday, May 27, at St. Patrick Church of Merna in Bloomington. The homilist will be Father Chase Hilgenbrinck. A light reception will follow.