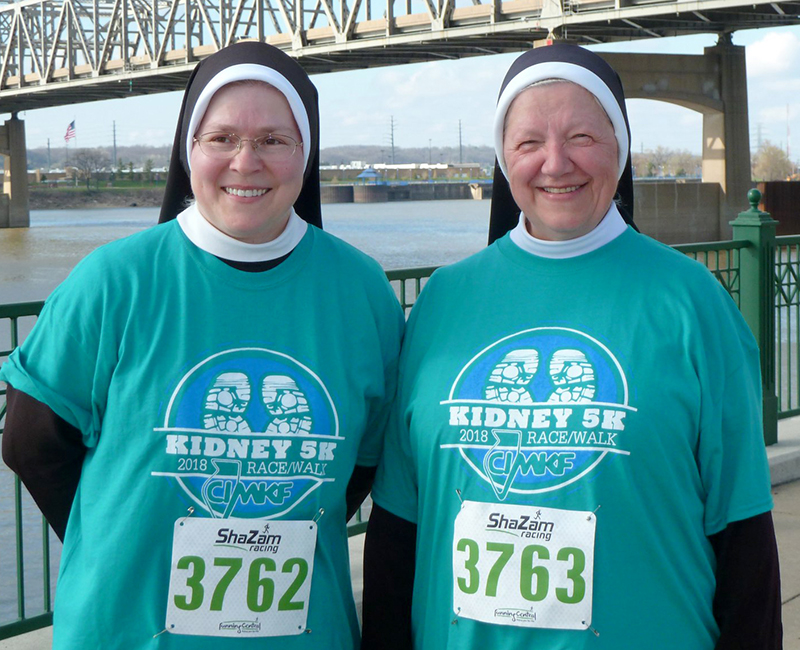 PEORIA HEIGHTS — Anyone who has seen the Franciscan Sisters of John the Baptist travel the few short blocks from their convent to Mass at St. Thomas the Apostle Church knows that they like to walk — fast.

Mother M. Vaclava Ballon and Sister M. Marion Hudackova used that to their advantage when they entered the Central Illinois Memorial Kidney Fund 5K race/walk on April 28. For the third time, Mother Vaclava took top honors for participants 60 and older, finishing in just under 41 minutes and in the first half overall.

“I like to walk,” Mother Vaclava said. “I have to take care of this property so I have to stay in shape.”

While there was a lot of laughter and joy in recalling moments from the race, the Franciscan Sisters of John the Baptist take part in the event each year for a serious cause. It is their way of remembering and honoring Sister M. Bernadette Kouri, FSJB, who died of polycystic kidney disease on July 11, 2014.

The CIMKF 5K raises money to serve chronic kidney disease patients receiving dialysis. This year marked the fourth time for the event and drew nearly 60 people, many of them doctors, nurses and family members of those being treated or in memory of those who have died.

Sister Bernie was 39 when she was told it was only a matter of time until she would need to go on dialysis, a procedure to remove excess water and toxins from the blood. She was going three times a week for four hours until Sister Marion finished nursing school and was able to take care of Sister Bernie’s dialysis at the motherhouse.

“We had firsthand experience with Sister Bernie being on dialysis for years, so we truly know the struggle the patients have to go through, that the families have to go through,” Sister Marion said. “And you have extra doctor appointments because these are sick people. They have diabetes, they have infections, they have all kinds of things they have to take care of between dialysis.”

The Franciscan Sisters of John the Baptist hope to increase their support by being sponsors for the CIMKF 5K next year. And they’ll continue to participate.

“We will do it as long as I can walk,” Mother Vaclava promised.