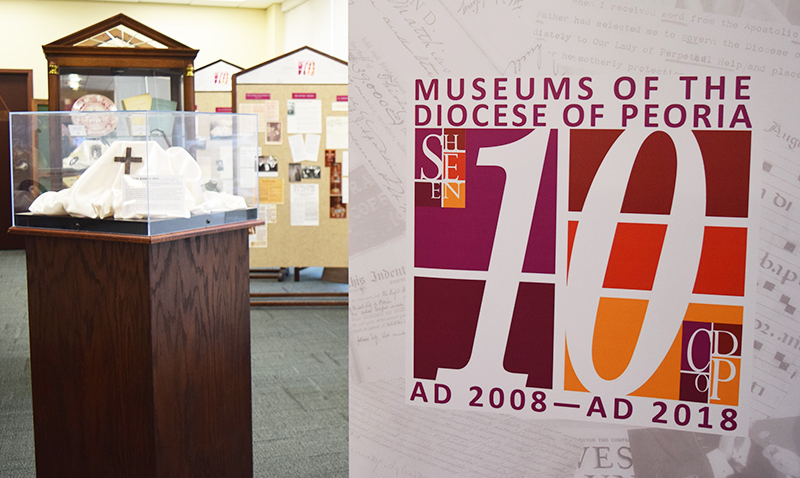 Clean out the basement of a home you’ve lived in for a while and you’ll find as many memories as objects.

For an exhibit to mark the 10th anniversary of the Museums of the Diocese of Peoria, planners poked through the diocesan archives in the basement of the Spalding Pastoral Center and found memories — and stories — at every turn.

The result is “Secrets of the Archives: Trinkets and Treasures from the Basement,” an eclectic exhibit that includes more than 40 pieces ranging from a wooden cross that dates to 1693 to photos of former Bishop Edward W. O’Rourke tending to his famous vegetable garden in the 1980s. 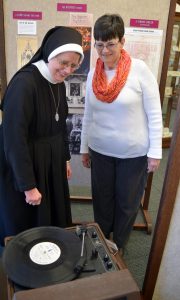 Sister Ann Gill, FSJB, diocesan archivist, and Bridgett McDonald listen to choir music from a 1954 Mass at St. Mary’s Cathedral in Peoria that was recorded for an album. McDonald is a member of St. Joseph Parish in Pekin. (The Catholic Post/Tom Dermody)

The anniversary exhibit is open to the public through December. The Museums of the Diocese of Peoria — located on the first floor of the Spalding Pastoral Center, 419 N.E. Madison in Peoria — include the permanent displays of the Archbishop Fulton Sheen Museum and rotating exhibits in the Diocesan Museum. There is no admission charge.

In its first 10 years, the diocesan museum has hosted 21 exhibits (see accompanying list). The latest one is the first without a specific topic, according to Sister Lea Stefancova, FSJB, diocesan archivist.

“During those 10 years we found so many things, just bits and pieces that wouldn’t go with anything major,” she told The Catholic Post. “They are quite interesting and we would like to share them.”

Visitors will linger at each treasure, trinket, and accompanying story compiled by museum staff. Other examples include:

Recently donated items found in the exhibit include a zucchetto from Pope Pius XII and an antique  portable confessional from the Heading Avenue Franciscans. There is also a stamp collection from the late Father Koloman Kassovic and an impressive collection of relics from Msgr. Steven Rohlfs.

The diocesan archives frequently receives calls from people who find religious items, books, or letters while going through the belongings of a deceased parent or grandparent.

“Sometimes people don’t know how to dispose of it,” said Sister Lea. The diocesan archivists — including Mother Vaclava Ballon and Sister Ann Gill, both also of the Franciscan Sisters of John the Baptist — enjoy seeing such items and “sometimes we say, ‘Oh my goodness, you have no idea what treasure you’ve brought,’” said Sister Lea.

She expressed special gratitude to three contributors to this year’s exhibit:  George Bud Sullivan, for sharing a story about a housekeeper when then-Father Fulton Sheen was at old St. Patrick Parish in Peoria; Michael Bork, for background on the Pope John XXIII Award given to his grandfather, Jewish philanthropist Morris Bork; and Christopher Farris from the Peoria Public Library, “a great researcher who doesn’t give up.”

For more information on the Museums of the Diocese of Peoria or to schedule a tour, call (309) 671-1550 or visit cdopmuseums.org.

A DECADE OF EXHIBITS LISTED

Here is a list of exhibits at the Diocesan Museum since it opened in 2008:

Pre-History of the Peoria Diocese

The Presence of Benedictines in Peoria Diocese

A Father for Our Family (Bishop Jenky’s life and ministry)

On the Shoulders of Bishop Spalding (Catholic education)

Vatican II and the Peoria Diocese

Ethnic Churches in the Peoria Diocese

There is no Greater Love (military chaplains of the diocese)

Secrets of the Archives.