After riding through snow, wind and rain for much of the first three days, the Priests Pedaling for Prayers started to pick up some sunshine on the fourth day of their 275-mile journey and finished strong on “a perfect day” in Mendota on April 20. That seemed appropriate in the middle of the Easter Season, they said. 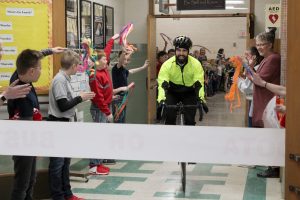 Father Michael Pica prepares to break a banner that says “Mendota or Bust” to leave Sts. Peter and Paul School in Nauvoo and officially start the second Priests Pedaling for Prayers on April 16. (The Catholic Post/Jennifer Willems)

“This is all caught up in the paschal mystery,” Father Adam Cesarek told The Catholic Post at a dinner hosted by Mendota Knights of Columbus Council No. 2090. “The whole week was kind of a Good Friday and Holy Saturday on the road — cold, winter, wet.”

That all led to “a little bit of an Easter Sunday” on their last day as they traveled from Peru to Mendota, by way of Peterstown, accompanied by the sun and warmer temperatures. He called it a gift.

There would be many gifts and blessings for Father Cesarek, Father Michael Pica, Father Tom Otto and Deacon Matt Levy as they rode their bicycles across the Diocese of Peoria to raise awareness of and prayers for vocations to the priesthood and consecrated life. They started with a “Grand Depart” assembly at Sts. Peter and Paul School in Nauvoo on April 16 and traveled as many as 76 miles each day until they reached the finish line at Holy Cross School in Mendota on April 20.

At the school assemblies, Masses and Holy Hours at 18 schools and churches along the way, the priests took turns sharing their vocation stories and encouraged people of all ages to listen for God’s voice with “the ear of your heart.” True happiness comes from doing what God asks, they said.

Father Pica, who proposed the idea of Priests Pedaling for Prayers last year, is parochial vicar at St. Patrick Church of Merna, Bloomington, and St. Mary, Downs, and on the chaplain team at Central Catholic High School, Bloomington. 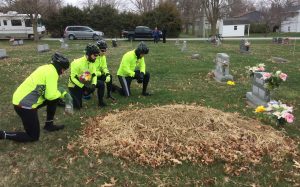 This year’s ride was dedicated to Msgr. Gregory Ketcham, who was known for tirelessly promoting vocations, especially during his time at St. John’s Catholic Newman Center at the University of Illinois in Champaign. He died Feb. 8 after a 20-month battle with brain cancer and there was no question they would ride in his honor, the priests said.

After leaving Nauvoo, their first stop was at Oakwood Cemetery in Hamilton to pray at the grave of Msgr. Ketcham. They brought with them a bouquet of flowers from the students at Sts. Peter and Paul, along with their prayers.

Deacon Levy brought stones and soil from the Holy Land to sprinkle over the burial site. He explained that stones are often left at gravesites as a gesture of respect and remembrance in a climate where flowers are not always available.

Deacon Levy serves at Our Lady of Guadalupe in Silvis and St. Patrick in Colona.

As they prepared to conclude the vocations ride five days later, they would stop at Sts. Peter and Paul Church in Peterstown for daytime prayer from the Divine Office and once more offered the Prayers for the Dead for Msgr. Ketcham.

They said a highlight of this year’s journey was having Bishop Daniel R. Jenky, CSC, ride into the Kelly Needham Gym at Peoria Notre Dame High School with them on April 18. He traveled in a four-wheeler with pedal power provided by Deacon Levy and Chris Gavin, a bicycling enthusiast and trustee at Immaculate Conception in Monmouth, who joined them for the day. 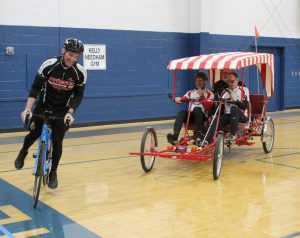 Bishop Daniel R. Jenky, CSC, rides around the gymnasium at Peoria Notre Dame High School in a four-wheeler fit for a bishop to join the Priests Pedaling for Prayers at a school assembly on April 18. At the wheel is Deacon Matt Levy of Silvis. Helping to provide the pedal power is Chris Gavin of Monmouth. They are accompanied by Father Adam Cesarek. (The Catholic Post/Jennifer Willems)

“It’s a great idea,” Bishop Jenky told The Catholic Post. “A lot of people are into cycling and they see priests have lives and personalities besides what they see on the altar. I’m very proud of our young priests.”

Raising the next generation of priests and religious is so important, he added.

“I do not think I know any priests who do not love what they do,” Bishop Jenky told the Peoria Notre Dame students. “If people knew what a blessing it was to serve God and neighbor as a priest, we would have to put additions on every seminary in the country.”

From Peoria Notre Dame the three priests and their companions rode to OSF HealthCare Saint Francis Medical Center to thank The Sisters of the Third Order of St. Francis for their support and prayers. OSF HealthCare has been a major sponsor of Priests Pedaling for Prayers and the communications staff has helped to get the word out about the vocations ride in the communities OSF HealthCare serves across the diocese.

Father Otto told those who attended the presentation that they were happy to partner with OSF HealthCare since all three of them provide pastoral care at OSF facilities as part of their parish assignments.

“We’re also hoping that, indirectly, our trip across the diocese will promote wellness and health, as well,” he said.

The main point of the ride, though, is to pray and to pray especially for vocations to the priesthood, Father Otto said.

“Every day we experience that the harvest is truly abundant, but there are few laborers to gather it in,” he explained.

“There are so many hungering to go deeper spiritually, to go deeper in their faith life. Every day I think if only there was one more priest in the town I serve in how much more we could do, how many more people would be served,” Father Otto said. “So we’re asking people to pray for vocations.”

In sharing his vocation story, Father Cesarek spoke about the need for another kind of support.

They were also greeted by one of their fans, Dr. Michael Cruz, CEO of OSF HealthCare’s Central Region, who is a bicycling enthusiast. He said he would be looking for ways to join them in the future.

Each school had a different way of greeting and sending off Father Pica, Father Cesarek, Father Otto and Deacon Levy. That started at Sts. Peter and Paul in Nauvoo where the children had made a banner with the words “Mendota or Bust” for the Priests Pedaling for Prayers to ride through as they began their journey.

St. Paul School in Macomb, Holy Family School in Oglesby, and Trinity Catholic Academy in LaSalle had students lined up on the sidewalk to welcome them as they rode in, while the children at St. Philomena School in Peoria and St. Michael the Archangel School in Streator went outside to cheer them on their way. 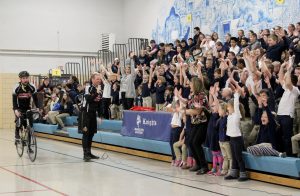 At the encouragement of Father Adam Cesarek, the elementary school students at Marquette Academy in Ottawa do “The Wave” as Father Tom Otto rides past them on his bicycle April 19. The Priests Pedaling for Prayers also visited the high school campus. (The Catholic Post/Jennifer Willems)

At Holy Cross School in Mendota, the track team met the priests and Deacon Levy at the entrance to the parish campus and ran with them to the finish line in the school parking lot. The students there greeted them with cheers and a variety of colorful posters and banners, and released black and white balloons as they rode by, bumping fists and exchanging high fives.

The Holy Cross youngsters also had a song prepared. Sung to the tune of “Bingo,” it has lyrics written by Anita Kobilsek, principal.

But the students prepared spiritually, too, according to Patsy Santen, principal at St. Vincent de Paul School in Peoria.

As part of Priests Pedaling for Prayers, people were asked to pledge prayer and sacrifices for more vocations to the priesthood, consecrated life and holy marriages. Santen credited Sarah Hogan, director of religious education, for introducing the concept and helping the children choose something to do at their own level.

“The first-graders gave up the first five minutes of their recess” for a whole week, Santen said. “They walked out and sat there, with hands folded and eyes closed, making the sign of the cross. It was beautiful.”

And the kindergartners gave up their afternoon snack for the entire week, she added.

At the school assemblies, the priests used plenty of humor to get their message across. They quizzed the students, rewarding them with official Priests Pedaling for Prayers t-shirts for the correct answers to such questions as:

And they taught the students the diocesan prayer for vocations by making a contest out of it, chanting back and forth, “Lord, help me to want to be/what you want me to be!”

In his homily for a Mass for the students of Peru Catholic School in Peru, Father Pica reminded them that everyone has a vocation, which is a way to know, love and serve God.

Father Otto, Father Cesarek, Father Pica and Deacon Levy did a lot of praying themselves as they rode across the diocese. Each day they prayed a rosary while pedaling along the country roads and as they entered each new county and town they remembered the people there and asked the Lord to be with them and guide them.

The toughest day was April 18, when they traveled 76 miles from Peoria to Streator — the last 52 miles of it in a cold mist that turned to rain. 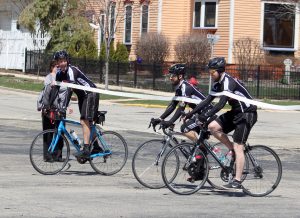 Breaking the tape to complete a journey that took them 275 miles from Nauvoo on April 16 to Mendota on April 20 are (from left) Father Adam Cesarek, Father Michael Pica and Father Tom Otto. (The Catholic Post/Jennifer Willems)

“We worked as a team and we just persevered through it,” Father Pica said.

“None of us would have been able to accomplish it on our own,” Father Cesarek said of the vocations ride. “We all would have thrown in the towel if we had been on our own.”

In the end, it was the joy of riding and praying together, the welcome and excitement of people across the diocese, and the opportunity to spend time with their brother-priests that kept them going strong, they said.

Father Cesarek said having an accomplished cyclist like Deacon Levy along helped them to maintain a steady pace, instead of competing with each other. And when Father Otto had a flat tire on the way to Streator, Deacon Levy changed it with “NASCAR speed.”

“They all have generous hearts,” Deacon Levy said of the three young priests. “It’s been a blessing for me to do this. I knew the riding was going to be fun, but the other 80 percent of what we’re doing — the praying together and sharing our faith, I enjoy that.”

“We’re only here because we’ve encountered our Lord and he has put people in our lives to help us to become the men, the priests that we are, the deacon that Deacon Matt is, to help us to grow,” Father Pica said. “And it’s all because of an encounter with our Lord. We would be nothing without him.”

EDITOR’S NOTE: Dozens more photographs from Priests Pedaling for Prayers have been posted to albums on The Catholic Post’s Facebook site.