Funeral homily: Fr. DeBisschop cared for his people, they returned the affection 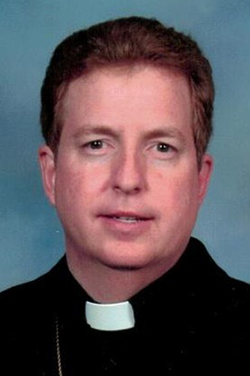 EDITOR’S NOTE: Following is the homily from the April 6 funeral Mass for Father James DeBisschop. (Read his obituary here.) The Mass was celebrated at Sacred Heart Church in Moline and the homilist was Father Mark DeSutter, pastor.

Christians believe that Jesus is the template of our lives. Also, we feel that when people interact with us, they should understand what Jesus was all about.

Our Lord lived 2,000 years ago so he cannot be physically present to those who seek him.  But other people can have a direct experience of Christ, through us, his disciples. Father Jim believed that as a Christian man he must be a representative of Jesus in the world.  For that reason, he studied the Scriptures closely, he prayed for divine inspiration fervently.  If others believed that he failed to live out his faith, it was very disturbing to him.

Jim picked out the Gospel we have just read because it spoke to him.  Somehow it encapsulated who he was as a person.  In the Gospel of Luke, we see Jesus come to his hometown.  He declares the beginning of his ministry in Galilee.

What we believe about the historical Jesus is that he never traveled very far in his life.  He wandered no more than a few miles up and down in the country of Israel.  He did not go off to some great school to learn the wisdom of the ancient world.  We believe he did not travel to other continents seeking spiritual truths.  No, Jesus absorbed his faith from his relatives his friends and experiences.  His mother and father, Mary and Joseph, were probably the first teachers of Jesus in ways of his Jewish faith.  He learned from the day laborers he worked with.  He contemplated the changing of the seasons, farming, how buildings were constructed.  He watched as people conducted their business. He observed whether they were stingy are generous, proud or pious.  The world was his Theology Book.

The other thing that we learn about Jesus, in the Gospel we have just read, is that he thought that he was led by the Spirit.  He also believed that this Spirit would inspire him to be prophetic in his ministry.  His task was not to say what people wanted to hear.  Jesus’ call was to try to help people reform their lives.  His vocation was to challenge people’s way of thinking.  But he also believed that the chief attribute necessary in ministry was mercy. He showed God’s mercy to others over and over.

ALL HE EVER WANTED TO BE WAS A PRIEST

Father Jim picked these words from the Scripture because he felt that they reflected who he was, what he tried to do.  Jim was a hometown boy.  He was a Quad City native. He was very happy with that fact.  He believed his experiences growing up made him who he was.  His roots were deep here.  We have a symbol of that rootedness in the middle of the sanctuary today.  The Sacred Heart altar of sacrifice was donated by Jim’s mother Faye in honor of his Father Jean.

Jim grew up here at Sacred Heart. He was baptized here, received all the sacraments of initiation here. He said his first Mass here.

A few weeks ago, Jim came to our priest’s support group meeting to say goodbye.  Tears were shed as we expressed our admiration for his courage.  He said, at that moment, that all he ever wanted to be a was a priest. He knew in fourth grade, he said. 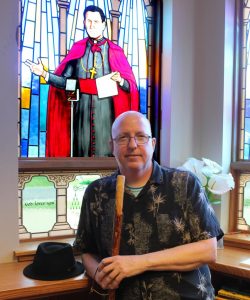 In this 2016 file photo, Father James DeBisschop stands near the window of Venerable Archbishop Fulton J. Sheen at Mary, Our Lady of Peace in Orion. Prayers for healing through Sheen’s intercession meant a great deal to the priest. (The Catholic Post/Jennifer Willems)

He spoke of the great examples that he had as a child. The Heading Avenue Franciscans who taught him at Sacred Heart Grade School had a great impact.  He spoke of the priests who formed him in the faith. He was close to his pastor, Msgr. Blecke, Father Lee and Father Bill Betson as well as the priests who taught at Alleman.  He also felt a great affinity towards St. Ambrose College where he went to minor seminary.

Looking at Father Jim’s history, it is a little wonder that he always supported Catholic education. He wanted others to do that as well.  He was generous with his time and donations toward all the schools he attended because he felt these institutions made him who he was. One of his great attributes was his loyalty.  He did not forget those who helped him throughout his life journey, especially those who educated him.

The other reason Jim might have picked the Gospel from the fourth chapter of Luke is that he felt he chose to be prophetic in his priestly life.  Prophets can rub people the wrong way at times. Jim would challenge me as well as other people.  He believed the priesthood should be lived in a certain way.  If someone needed service, then it was to be provided, even if it was inconvenient to the priest.

He always found things to keep him busy. The parishes that he ministered in were not the biggest parishes, but he always had one more idea to try. He also felt that he was an advocate for his people. Jim would stand up for his parishioners.  He would make sure that their rights were respected.  This sometimes put him at odds with those in authority, but Jim was never trying to win political points. He wanted the church to be the best it could be. And it crushed him when it was not.

Most of us know that Jim asked for a miracle after he was diagnosed with colon cancer five years ago.  He asked Archbishop Sheen to pray for him.  He handed out prayer cards to others that asked for his healing.  He went to numerous healing services.  He dutifully went to his doctors.  He dieted.  He took chemo. (Father DeBisshop spoke to The Catholic Post about his illness in a 2016 interview found here.)

Because of his suffering I saw a change in Jim’s personality.  He became more patient.  He tried to enjoy life each day.  He mellowed in so many ways.  The fire was still there, but words of mercy, were also there. We would have to say that we all have seen many little miracles as we have interacted with Jim over these last five years.  His prayers were answered in that he had healing in his life in many ways.

im was proud of all the parishes he served.  He was especially thankful to the people of St. Maria Goretti and Our Lady of Peace who supported him in the dying process.

We read in the second lesson from St. Peter, “God’s flock is in your midst, give it a shepherd’s care.” Jim wanted to be a good shepherd. The last time we spoke Jim told of his love for his parishes. Maybe, given his prophetic streak, people might have wondered how he felt about them.  Jim was proud of all the parishes he served.  He was especially thankful to the people of St. Maria Goretti and Our Lady of Peace who supported him in the dying process.  Your shepherd cared for you affectionately.  You returned his affection. May you be blessed for your many kindnesses to him.

I will let one of Jim’s parishioners have the last word today.  This was a comment from one woman that was left on the website condolences.