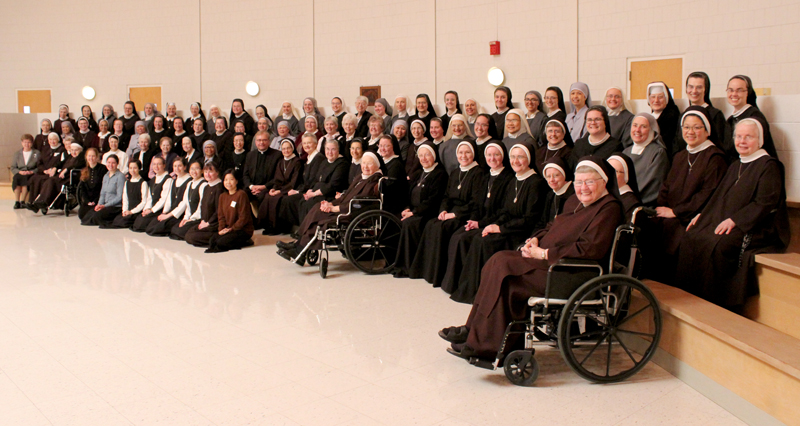 More than 100 members from eight religious communities in the Diocese of Peoria and the Diocese of Springfield gather for a group photo at the regional spiritual workshop hosted by The Sisters of the Third Order of St. Francis at their East Peoria motherhouse on April 7. The day was co-sponsored by the Sisters of St. Francis of the Martyr St. George. (The Catholic Post/Jennifer Willems)

EAST PEORIA – Holiness begets holiness and women religious, by strengthening their commitment to consecrated life, help everyone recognize and grow in their own call to holiness, Father Dennis Gill said at a regional spiritual workshop hosted by The Sisters of the Third Order of St. Francis last weekend. 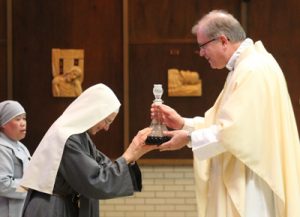 Father Dennis Gill, the speaker for the regional spiritual workshop, accepts the wine that will be consecrated at the opening Mass from Sister Elizabeth of the Contemplative Sisters of St. John. (The Catholic Post/Jennifer Willems)

“I want to say to you, be holy now. We need to be holy now,” he told more than 100 women religious and postulants from eight religious communities in central Illinois who gathered at the motherhouse of the East Peoria Franciscans for prayer, conversation and fostering friendships.

Concelebrating the Mass with Father Gill was Msgr. Rick Oberch, chaplain for The Sisters of the Third Order of St. Francis.

The theme for the workshop was “Strengthening and Maintaining the Integrity of Our Religious Consecration and Life in Community – for the Sake of the Church.”

Sister Judith Ann Duvall, OSF, major superior of The Sisters of the Third Order of St. Francis, said her community has two of these spiritual workshops each year to help the Sisters grow in their spiritual life and their life of consecration in the service of the church. Members of other religious communities regularly join them, but this is the first time a regional workshop has been held.

Sister Judith Ann was elected to a three-year term on the board of directors for the Council of Major Superiors of Women Religious last fall, and the Council encourages religious communities to hold regional gatherings as “a wellspring of hope and a trusted resource for the ongoing revitalization of religious life and the new evangelization,” she said.

“There are so many blessings inherent in religious life and it’s good for us to pause, to reflect upon, to celebrate, and to give thanks for these many, many blessings,” Sister Judith Ann said as she greeted workshop participants. “May this time together enliven all of our spirits and prepare us for even more fruitful service in the church in our many, many apostolic works of mercy and of prayer.”

The women religious took every opportunity to mingle and renew friendships during coffee breaks, lunch and dinner. After a group photo in the gymnasium, the Sisters and postulants grabbed a couple of basketballs and took turns perfecting their hoop skills or sat in small groups for more conversation.

In his three conferences, Father Gill talked about the integrity of the consecrated life, and the importance of strengthening and maintaining that consecration. He also suggested that how religious communities witness to communion among themselves and holiness are missions that cannot be ignored. 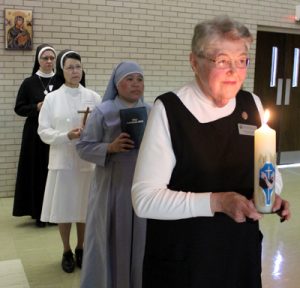 Preparing to carry in symbols of their consecrated life during the opening Mass are (front to back) Sister Mary Louise Hynd, OSF, with a candle; Sister Merlinda Marco, FAS, with a Bible; and Sister Mary Paulette Joerger, OP, with a crucifix. (The Catholic Post/Jennifer Willems)

Father Gill said Pope St. John Paul II was not teasing those in consecrated life when he called them experts in communion. They can’t afford to tease themselves either by tolerating isolation and disobedience.

These challenges to communion need to be addressed, he said, calling on them to encourage one another to burn with the charity of love in community.

This “radical new commission for communion” is vital in a world where people are afraid and don’t feel safe, Father Gill said.

He asked them to start by considering whether or not they can say “yes” to the Communion they receive at Mass – and everything that comes with it.

“For everybody, when someone in his or her life lives like the poor Jesus, the obedient Jesus, the chaste Jesus it is a sign of holiness, of living the will of the Father . . . because the life of the All-Holy One becomes a part of our lives,” he told them. “It’s in your grasp of these counsels and allowing them to infuse everything that you are and all that you do that you are holy – holy not for your own sake, but holy for the church.”

More photos from the regional spiritual workshop can be found at The Catholic Post site on Facebook.