CHAMPAIGN — Faith is a great gift, but if students don’t know their faith they could fall for anything that glitters and Sister Clara Maria Malay, SCTJM, said everything on a college campus glitters.

“If they encounter Christ here, it can change the trajectory of their lives,” according to Sister Clara, who in January joined the pastoral staff at St. John’s Catholic Newman Center at the University of Illinois. She is serving there with Sister Lucia Maria Sol and Sister Mary Rachel Hart, who are also Servants of the Pierced Hearts of Jesus and Mary.

It can be difficult to begin a new ministry in the middle of the academic year, but the three women religious have hit the ground running. Within days of arriving they boarded a bus to accompany the students traveling to Washington, D.C., for the March for Life.

Not only have they invited the students to join them in St. John’s Chapel for a rosary at 1:30 p.m. and Divine Mercy Chaplet at 3 p.m. four days a week, but they welcome the young adults for vespers at 5:30 p.m. on Tuesday and Wednesday. 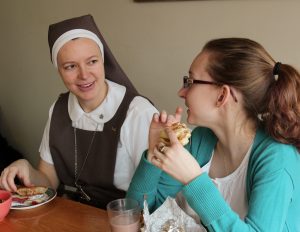 Sister Mary Rachel Hart, SCTJM, chats with a student during lunch on “Women Wednesday,” which is hosted by the Fellowship of Catholic University Students. This is one of many ways the Servants of the Pierced Hearts of Jesus and Mary have “jumped in” to get to know the students at the University of Illinois. The Catholic Post/Jennifer Willems

“Some of them have no idea what evening prayer is, but we realize that bringing the gift of religious life to campus is building awareness,” Sister Clara told The Catholic Post. “We need to have our evening prayer, but that doesn’t mean it’s exclusive from the students. They can join us.”

The Servants of the Pierced Hearts are also available for spiritual guidance. Sister Mary Rachel said Mother Adela Galindo, foundress of the religious community, prefers that term to spiritual direction.

“A director can tell you you have to do this or that. No. the person is responsible for making their own choices,” said Sister Mary Rachel. “You’re there to hear them, to listen with them, to pray with them, to listen to what God might be asking of them, and then present it. Then they’re free.”

It’s important for the young adults to grow and make decisions for themselves, she added.

Sister Lucia said bringing “the motherly love of Our Lady” to the students is another important aspect of what they are able to add to campus ministry.

She described it as “having the courage, the enthusiasm and the zeal to just be out there and be available to them, to share that joy that comes from loving the Lord” and then trusting the Lord to take care of things.

“He knows the timing of everything. He has us here for a reason,” Sister Lucia said. “Bringing the gift of our charism and our maternity to so many souls, it’s just so powerful.”

That motherly presence goes a long way toward making the Newman Center feel like a home for the students, said Father Robert Lampitt, director and head chaplain at St. John’s.

“That aligns very much with who we are and where our mission is at,” he told The Post. “Creating a home away from home for our students — not just those who live in the hall, but also the vast majority that live on or off campus.”

“We often say at this Newman Center, ‘Come, you belong here,’” added Deacon Bob Sondag, director of campus ministry for the Diocese of Peoria. “To be a pulse for Jesus Christ in the middle of a secular campus is exciting.”

Deacon Sondag said the young adults who come to St. John’s Catholic Newman Center are “all over the place” in their relationship with Jesus, so one size doesn’t fit all. “The day we think it does is the day that we’re going to be in trouble.”

Having the Servants of the Pierced Hearts on staff allows the Newman Center to speak with another voice, he said.

Their presence also amplifies the fact that Newman Hall isn’t a hotel, but a Christian house, Deacon Bob explained.

“I enjoy their extremely joyful presence and their willingness to jump in with both feet,” Father Lampitt said of Sisters Clara, Lucia and Mary Rachel.

He said the students were excited to hear that another community of Sisters was coming, especially those who remember the Salesians Sisters that served there before the Servants of the Pierced Hearts.

“They’ve been extremely welcoming to the Sisters,” he said. “The students have really enjoyed having them, even in this short time.”

The Sisters are living in a house purchased for them in a residential neighborhood in Champaign. Named Our Lady of Fatima Convent, it had an extra bedroom in the basement that could be converted into a chapel, as well as a large room that could accommodate meetings and bookshelves for a library.

Having a separate space from the Newman Center allows them to have the community life they need as Servants of the Pierced Hearts and allows them to be “in the world, but not of it.”

“I feel so humbled to have a front row seat to what God is doing in their lives,” Sister Clara said of the students at St. John’s Catholic Newman Center and the University of Illinois.

EDITOR’S NOTE: The Catholic Newman Centers on college campuses in the Diocese of Peoria are among the ministries receiving funding from the Annual Diocesan Appeal, which opens the weekend of April 14-15.