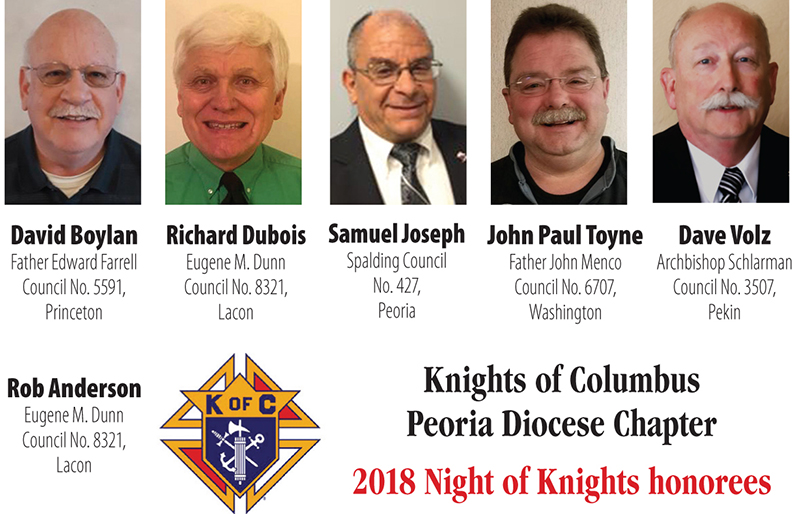 These six members of the Knights of Columbus from throughout the Diocese of Peoria will be recognized at a Mass and dinner in Peoria on Saturday, April 14.

Six members of the Knights of Columbus from across the Diocese of Peoria will be recognized for outstanding service to the organization, the church, and their communities at the 30th annual “Night of Knights” Recognition Dinner in Peoria on Saturday, April 14.

Sponsored by the Peoria Diocese Chapter of the Knights of Columbus, the evening begins with a 4:30 p.m. Mass at Sacred Heart Church, 504 Fulton St. A social period will follow Mass at 6 p.m. at the Spalding Pastoral Center, 419 N.E. Madison Ave., with the dinner and program beginning at 6:30 p.m.

This year’s honorees are:

A 25-year member of the Knights of Columbus, Anderson is a past grand knight of his council, a position to which he was elected six times. Twice during his tenure as grand knight the council received the Star Council Award. He has also served for 12 years as a council trustee, organized and coordinated many fundraisers, and has recruited 15 new members.

Anderson is a member of St. Vincent de Paul Parish in Peoria, where he has been an altar server, assists with decorating at Christmas, and helps raise money for parish needs. He is an active volunteer with St. Joseph’s Nursing Home in Lacon, the Peoria Chiefs baseball team, the Salvation Army, and the Old Settler’s Committee. He has helped to build a Catholic church in Haiti and also spends time assisting adults and children with disabilities. 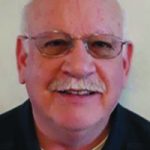 During his 47 years of membership, Boylan has served in leadership roles including grand knight, council trustee, and district deputy. He has chaired the council’s pancake and sausage breakfast numerous times and, during his term as grand knight, helped to bring in seven new members.

Active in Illinois Valley Cursillo and a member of St. Louis Parish in Princeton, he donated weeks of his time to help with a parish kitchen update and construction of a new greenhouse. He is chairman and founder of the Food for Families program, has served on the board of the “Christmas in April” program in Geneseo, was president of the Geneseo Rotary Club for several years, and has been involved with the Big Buddies and Little Buddies program.

He and his wife, Susan, have been married for 47 years and have three children. 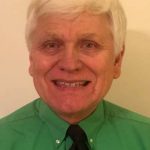 Financial secretary of his council since 1993, Dubois has chaired numerous council activities and events during his 26 years of membership.

He is organist and a soloist at Immaculate Conception Parish, providing music for Sunday Masses, funerals, and weddings. He served on the parish board for two terms and was youth choir coordinator for several years.

In the community, Dubois has been a JFL football coach; treasurer and board member of the Marshall-Putnam-Stark Jazz Choir and Show Choir; member and parade chair of the Marshall County Old Settler’s Committee; and has volunteered with St. Joseph’s Nursing Home, South Side Mission, Lacon Community Center, Midland Elementary School, and the Special Olympics Spring Games. He was the 2010 recipient of the Betty Comisky Service Award. He is a U.S. Army veteran.

He and his wife, Carol, have been married for 35 years and have three children.

A 39-year member of the Knights of Columbus, Joseph is a past grand knight and current trustee of his council. He has been council newsletter editor and assists in fundraising efforts. He is the current president of the Home Corporation Board of Directors.

An active member of St. Sharbel Church, he coordinates the lectors and spiritual gifts for weekend Masses and is lay spiritual director of its WATCH (We Are The Church) program. A frequent team member on Cursillos in the Peoria area, he also volunteers time in the prayer chapel or kitchen.

He is a two-time past president of the ITOO Society and volunteers with Sophia’s Kitchen, South Side Mission, and the Missionaries of Charity. 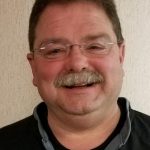 At St. Patrick Parish in Washington, he has served on the parish council, the school’s education commission, and has assisted with fundraisers.

In the community, he is an active volunteer at Washington Community High School, assisting with concessions and other activities for the softball team and band; has helped with disaster clean-up efforts in Washington and Washburn; and has been involved with Special Olympics, Habitat for Humanity, and Right to Life. He is a regular blood donor.

He and his wife, Cynthia, have been married for 27 years and have two children. 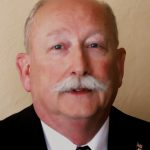 Volz is an usher and an extraordinary minister of Holy Communion at St. Joseph Parish. He has coached soccer, softball, and baseball teams. In the community he has been a fund drive volunteer for the American Lung Association and the American Cancer Association; has served on two Illinois Department of Public Health advisory committees, the Pekin Main Street committee, the Pekin YWCA building committee, and is a City of Pekin Housing Authority Board commissioner.

He and his wife, Christine, have been married for 43 years and have three children.