For new mother from East Moline parish, ‘it was time’ to join the Catholic Church

Heather Sacco, holding her 12-week-old daughter Natalie, is flanked by her mother-in-law and sponsor, Terri Sacco, and husband, Nick, after the Rite of Election at St. Mary's Cathedral in Peoria on Feb. 18. Already baptized, Heather will be received into the full communion of the Catholic Church at the Easter Vigil on March 31 at St. Anne Church in East Moline."It's just such a blessing," Terri Sacco said. (The Catholic Post/Jennifer Willems)

Heather Sacco has been going to Mass at St. Anne Church in East Moline since she started dating her husband, Nick, eight years ago. It surprised a few people, then, when she recently stood in front of the assembly and declared her intention to be received into the full communion of the Catholic Church at Easter.

“Even though I was going to church, I wasn’t technically a member. I just felt it was time to take the steps to join the church,” Heather told The Catholic Post in the days after she attended the Rite of Election and Call to Continuing Conversion on Feb. 18 at St. Mary’s Cathedral in Peoria.

Already baptized, she will be confirmed and receive the Eucharist for the first time at the Easter Vigil, which is March 31. It will continue a sacramental tradition that started when she married Nick at St. Anne Church on July 13, 2013.

They make their home in Silvis with their 12-week-old daughter Natalie, who was baptized at the East Moline church on Jan. 28. “Going through the (RCIA) classes made it that much more special,” Heather said. 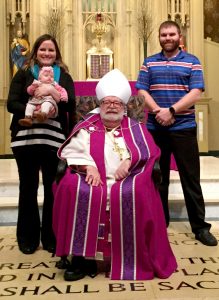 Heather and Nick Sacco, with their 12-week-old daughter Natalie, pause to celebrate Heather’s call to the Easter sacraments with Bishop Daniel R. Jenky, CSC, at the Rite of Election on Feb. 18. Already baptized, she will be confirmed and receive the Eucharist for the first time at the Easter Vigil at St. Anne Church, East Moline. (Provided photo)

She was one of 304 people recognized for their desire to be received into the Catholic Church and greeted by Bishop Daniel R. Jenky, CSC, at the Rite of Election. The prayer service was repeated on Feb. 25 to accommodate the 112 catechumens and 192 candidates and their godparents, sponsors, family members and RCIA teams. (See the related story here.)

Raised in the Quad Cities, Heather Sacco attended non-denominational churches with her mother as a child, but stopped going about the time she entered junior high school. She didn’t give up on faith, however.

“Before I met my husband I thought, ‘What do I want to find in a future husband? What are the qualities I want to have in him?’ One of the first things was I want a guy who puts God first and goes to church,” she said. “I wanted to start going back to church and I want that to be Number One.”

When she met Nick, she put those questions to him and was assured that his Catholic faith was a priority. Not only had he gone to Catholic schools, but his mother taught at Jordan Catholic in Rock Island for 29 years.

After dating for a month or two, he asked her to come to church with him. Eventually Heather decided to join the Catholic Church, but. . . .

“I had every excuse under the sun why I didn’t call the church office,” said the young woman, who works as a nurse in the cardiac catheterization lab at UnityPoint Health — Trinity in Rock Island.

“Finally, when we were expecting, it hit home. How am I going to raise a child and tell her these things were important if I’m not doing them myself,” she explained. “Enough excuses. It’s time.”

Terri Sacco made the call last fall and even though the classes had started, Heather was encouraged to join the Tuesday night sessions at St. Anne. Heather asked her mother-in-law to be her confirmation sponsor at Christmas.

Since she had gone to church as a child and had been attending Mass with Nick, a math teacher and coach at Pleasant Valley High School, Heather knew the prayers. She relished learning the meaning behind everything, though.

And while the communion services she experienced as a child were symbolic, she is looking forward to receiving the body and blood of Christ at Mass.

“Before I started going to church with Nick I always felt something was missing,” Heather said. “When we started going and now that I’m learning more, it feels like that void is being filled.”