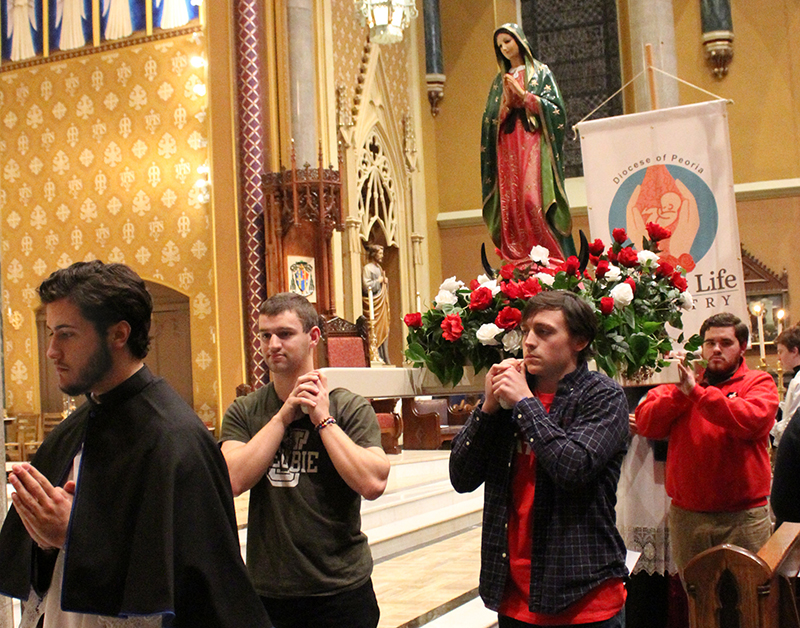 A statue of Our Lady of Guadalupe, long a symbol of the pro-life movement, is carried into St. Mary's Cathedral in Peoria in this photo from a previous Mass for the Legal Protection of the Unborn. This year's Mass and Holy Hour is set for 6:30 p.m. on Friday, Jan. 22. (The Catholic Post/Jennifer Willems)

In word, song and an extended period of prayer before the Blessed Sacrament, pro-life advocates joined Bishop Daniel R. Jenky, CSC, at St. Mary’s Cathedral in Peoria to lift up human life and dignity and gather the strength they needed to keep doing it.

As he greeted them before Mass on Jan. 24, Bishop Jenky made a confession.

“From time to time in this crazy world, I get a little discouraged,” he said. “But then all I have to do is be with all of you, with those who belong to Christ, who believe in the Gospel of Life, and I remember that the Lord is victorious and in the end his love and his Gospel of Life will always win.” 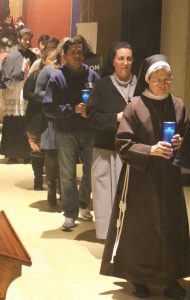 Sister Judith Ann Duvall, OSF, major superior of The Sisters of the Third Order of St. Francis and chairperson of the OSF HealthCare Board of Directors, and Sister M. Mikela Meidl, FSGM, executive vice president for OSF HealthCare, are among those carrying candles during the procession into the Mass and Eucharistic Adoration for the Unborn. (The Catholic Post/Jennifer Willems)

“Love Saves Lives” was the theme for the Mass and Eucharistic Adoration for the Unborn, which was sponsored by the Respect Life Ministry of the Diocese of Peoria. The evening of “prayer, penance and pilgrimage” included the sacrament of reconciliation, which was offered in English and Spanish at the cathedral’s two fixed confessionals and a temporary confessional in the Lady Chapel.

The readings at Mass, prayers of the faithful, and decades of the rosary prayed as adoration began also alternated between the two languages. In addition to the pontifical cantors, the cathedral’s Spanish Youth Choir provided musical leadership at the liturgy.

A candlelight procession at the beginning of Mass included a statue of Our Lady of Guadalupe, which was carried in by four students from the St. John Paul II Catholic Newman Center at Illinois State University in Normal. Our Lady of Guadalupe is the patroness of unborn children.

The “culture of death” that dominates society embraces an attitude of indifference toward our Christian principles, said Deacon Bob Sondag, who was the homilist for the Mass. He noted that this attitude does not have room for the God of creation nor his son, Jesus Christ.

“It was Venerable Fulton Sheen who often cautioned the followers of Christ to beware of developing an ‘attitude of indifference’ toward God, which can rapidly develop if we allow ourselves to be consumed by the daily-ness of life. We can just be too busy, too consumed,” said Deacon Sondag, who serves as vice chancellor of the Diocese of Peoria and is assigned to Immaculate Conception Parish in Manito.

The danger is not seeing Jesus in the people around us who need our help, such as children living in poverty and their mothers, who chose not to have an abortion. Genetic engineering, capital punishment, genocide, malnutrition, sexual exploitation, violence and euthanasia also degrade human life, he said.

“As pro-life advocates, we are challenged to promulgate the doctrine of human dignity in all these areas and to do our best to eradicate the culture of death that surrounds us,” Deacon Sondag said.

He also reminded them that being pro-life is not a one-time event. 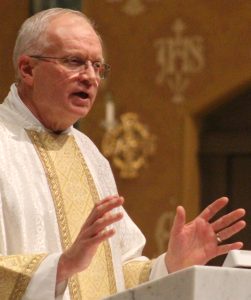 In his homily at the Mass and Eucharistic Adoration for the Unborn, Deacon Bob Sondag said being pro-life is not a one-time event. “We are called to build a culture of life every day, 365 days a year, wherever we are, whatever we are doing.” (The Catholic Post/Jennifer Willems)

“We are called to build a culture of life every day, 365 days a year, wherever we are, whatever we do,” he told those who filled the cathedral.

Explaining that one cannot give without receiving and cannot receive without giving, he pointed to the cross as the perfect example of this kind of love.

Each time we come to Mass, we are invited to bring our joys and sorrows, success, brokenness, and sinful nature to the altar, Deacon Sondag said. “How have we enhanced the human dignity of another this past week? Offer that to God,” he added.

Then we must open ourselves to receive God’s grace, he said.

“It’s as though Jesus is saying to us, ‘Would you like to receive my mercy and my love?’” Deacon Sondag said. “We should run into this house and tell the master, ‘I want more! I want more!’”

He thanked Bishop Jenky on behalf of everyone at St. Mary’s Cathedral and those who couldn’t come, for being “the shepherd who leads his flock through troubled waters toward Jerusalem and bringing us closer to our sacred calling. Thank you for your steadfastness here in the diocese.”