A group from the St. John Paul II Catholic Newman Center at Illinois State University in Normal sings as they process up Dearborn Avenue with thousands of other participants in March for Life Chicago on Sunday, Jan. 14. Those pictured include, from left, Ayla Kibler, Hannah Carroll, Sister Silvia Maria, SCTJM, Maria Castiblanco, Noelle Ortega, Kristin Anderson, and Alex James. (The Catholic Post/Tom Dermody)

CHICAGO — Pilgrims from the Diocese of Peoria to March for Life Chicago on Jan. 14 knew the seriousness of their cause but also found ways on a sub-freezing January day to reflect the joy of their faith and belief that “Love Saves Lives.”

Many of the 35 college students and staff from the St. John Paul II Catholic Newman Center at Illinois State University in Normal taking part sang songs of praise as they marched through the city’s downtown with more than 5,000 other participants.

“Their lasting energy, spontaneity, and joy fueled the march to make it more like a celebration of life than a protest,” said Amy Widhalm, a sophomore at Illinois State, of the Newman Center group that joined another busload in a daylong pilgrimage sponsored by the Diocese of Peoria. 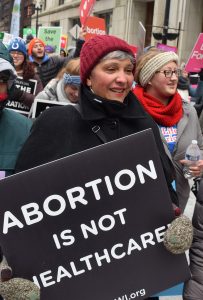 Cecilia Soñé, director of Respect Life for the Diocese of Peoria, carries a sign during March for Life Chicago on Jan. 14. (The Catholic Post/Tom Dermody)

“This is exactly what the pro-life movement is,” continued Widhalm, who is studying speech pathology. “It’s a positive community of people who want to celebrate all life’s worth. I hope we were able to stir at least one heart to yearn for the truth that all life is valuable.”

Pro-life activities continue around the Diocese of Peoria in January: see our round-up

While Widhalm was attending her fifth large-scale march, Deb Shanahan — a mother of four from St. Mark Parish in Peoria who marched with her own mother, Joanne Svymbersky — was taking part in her first. But the reaction was much the same.

“It’s such a beautiful, peaceful, joyful march,” said Shanahan. “No one is there except out of joy that we have life.”

Across the bus aisle from Shanahan, Gary and Diane Spurgeon from Epiphany Parish in Normal, spoke of taking part in their first major pro-life march, though they are active in the movement and regularly attend the annual rally at the McLean County Courthouse near the anniversary of the U.S. Supreme Court decisions legalizing abortion.

“It’s a great experience,” said Gary Spurgeon. “The colder you got, the more you realized it’s not all fun and games doing this. It took commitment. You’re here to make a presence and stand up for the cause.”

Diane Spurgeon said defending the sacredness of human life at all its stages is “a part of our faith, a part of our being.”

“We don’t want to just believe it,” she told The Catholic Post. “We’re not afraid to be out there and show it, to live what we believe.”

That is exactly what Cardinal Blase Cupich of Chicago encouraged the crowd to do in his address to the crowd before the march. He especially applauded the young people present who “give us confidence that the energy to protect the child in the womb has not grown weak over these 45 years but is youthful and strong and vibrant, just as you are.” 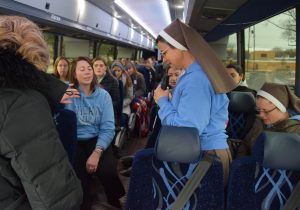 Sister Silvia Maria Tarafa, SCTJM, director of the St. John Paul II Catholic Newman Center at Illinois State University in Normal, leads a prayer aboard one of two buses that brought pilgrims from the Diocese of Peoria to March for Life Chicago on Sunday. The Catholic Post/Tom Dermody)

The 1973 Roe v. Wade decision robbed the nation of its children and its dreams, said Cardinal Cupich.

“Now with the recent law passed by our Legislature and signed by our governor, more lives and reams will be robbed as will family incomes that will be forcibly used to pay for abortions,” he said, as a chorus of boos rang out in Federal Plaza.

Other speakers at the rally included Bishop Donald Hying of Gary, Indiana; Pat McCaskey, co-owner of the Chicago Bears who read an original pro-life poem; and Ramona Trevino, a former Planned Parenthood director and author of “Redeemed by Grace.”

She said it is not hate, but indifference that makes it possible for Planned Parenthood to perform hundreds of thousands of abortions every year.

“THE TIDE IS TURNING”

The Diocese of Peoria pilgrimage was organized by the offices of Evangelization and Faith Formation and Respect Life. This is the third year the diocese has sponsored the pilgrimage to March for Life Chicago, according to Shirley Plaag, diocesan director of evangelization and faith formation. 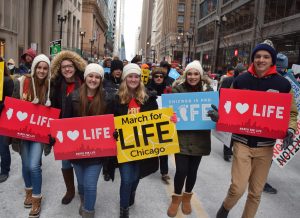 Among the nearly 50 students from Central Catholic High School in Bloomington taking part in March for Life Chicago were, from left, Taryn Shanahan, Noelle Ghrer, Marissa Castleman, Ellie Deneen, Audrey Sanders and Thomas Smith. Central Catholic is also sending a busload of students to the national March for Life in Washington, D.C., on Friday, Jan. 19. (The Catholic Post/Tom Dermody)

“It’s always a beautiful, peaceful presence,” said Plaag of the march. She said that stops made at two churches — St. Michael in Old Town Chicago for Mass and Annunciation Byzantine Catholic Church in Homer Glen for dinner and a tour — added to the pilgrimage aspect of the day. She thanked their hosts at the two locations for their hospitality. The pilgrims also prayed the rosary and Divine Mercy Chaplet for pro-life intentions on their way to and from the march.

“I believe the tide is turning,” said Cecilia Soñé, diocesan director of Respect Life Ministry, who also said she was impressed by the joy shown by all age groups.

Samantha Johnson, a junior at Illinois State University who traveled with the Newman Center group, found more than she had anticipated at March for Life Chicago.

While she went to support the unborn, “I found myself carrying in my heart all the men and women who feel that they have no choice. I felt a renewed responsibility to walk with more attentiveness to the needs of my brothers and sisters around me.

“I am praying for all those who have been affected by abortion,” Johnson continued, “and I pray that as a church we continue to stand united in offering our love and support to all mothers and fathers in difficult situations.”

EDITOR’S NOTE: More photos from March for Life Chicago have been posted to an album on The Catholic Post’s Facebook site.