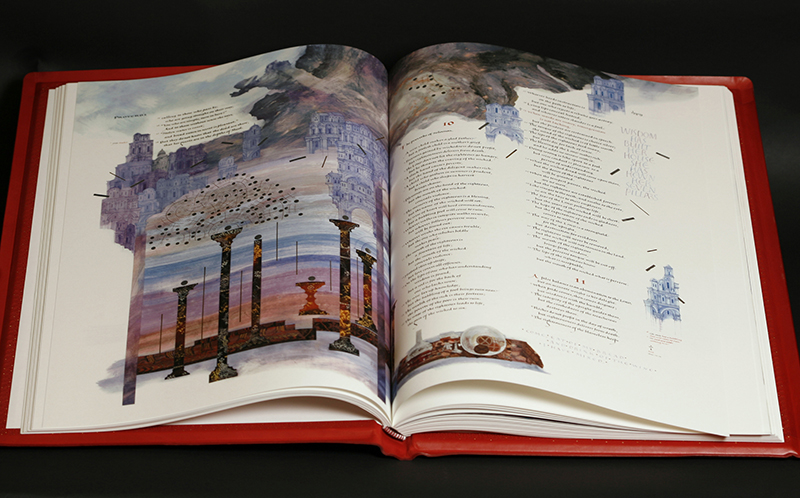 This is a page from one of seven books that make up the Heritage Edition of The Saint John's Bible. Two volumes of the artistic work will be displayed this year at the Ames Library at Illinois Wesleyan University in Bloomington. (CNS/Bob Roller)

BLOOMINGTON — Throughout 2018, people in central Illinois will have an opportunity to see and explore the word of God in a new and exciting way when two volumes of the Heritage Edition of The Saint John’s Bible come to Illinois Wesleyan University.

From January through June, “Gospels & Acts” will be displayed at the Ames Library on campus. For the last six months of the year, “Pentateuch” will be exhibited.

The inaugural public events for “A Year with The Saint John’s Bible” are scheduled for Wednesday, Jan. 17, and Thursday, Jan. 18, and include training for those who are interested in serving as docents, and an ecumenical prayer service and blessing by local clergy. Sister Sandra Brunenn, OSB, prioress of St. Mary Monastery in Rock Island, is among those who will participate since Benedictine Oblates in Bloomington-Normal have supported the plan for the visit and will play a role in taking the volumes to area churches and schools.

The main event is planned for Jan. 18 at 6:30 p.m. and will feature Tim Ternes, director of The Saint John’s Bible at the Hill Museum and Manuscript Library in Collegeville, Minnesota. His presentation, “A Revolution in Illumination and Imagination: Introducing The Saint John’s Bible,” will take place in Westbrook Auditorium’s Presser Hall, 1210 N. Park St.

“It’s true that in our day you could pull up any version of the Bible you want on your laptop or phone. But this makes you take time because you’re so stunned by the beauty of this work of art. It just takes your breath away,” said Madeleine Callahan, local coordinator of the Benedictine Oblate community in Bloomington-Normal. “It’s a new way to realize how sacred the Bible is.”

The Saint John’s Bible was commissioned by Saint John’s Abbey and University in Collegeville, Minnesota. It took 23 artists 15 years to complete the seven volumes, which include 1,127 handwritten and illuminated pages. The Heritage Edition also includes seven volumes and is the same dimensions as the original — 2 feet high and 3 feet wide — but is not on parchment.

“It’s important to have people experience such a work of art, but it’s also important to learn how to read it,” she said.

Callahan added that the stated goal of creating The Saint John’s Bible was to spark the spiritual imagination, so those who visit will see illuminations that are updates for the 21st century. For example, women are depicted as are scientific concepts, so when Jesus’ genealogy is portrayed there are strands of DNA.

And because St. Benedict quotes the Bible in his rule that guides Benedictine life, small Benedictine crosses are placed next to those particular verses, she said.

“A Year with the Saint John’s Bible” at Illinois Wesleyan University is made possible by a grant from the Merwin Multifaith Fund.

For more information about either The Saint John’s Bible or its Heritage Edition, visit saintjohnsbible.org.