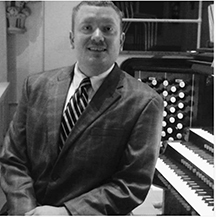 It was what he observed while playing the organ for liturgies at St. Mary’s Cathedral in Peoria that brought Jon Kroepel into the Catholic Church at last year’s Easter Vigil. Now he will get to inspire others as the new director of sacred music there.

Kroepel succeeds Greg Etzel in the position, which has been reorganized to include his role as cathedral organist.

“It’s an honor and a privilege,” Kroepel said of the opportunity to serve Bishop Daniel R. Jenky, CSC, and assist with the prayer at St. Mary’s Cathedral.

One of his goals is to invite parish and school choirs to sing at “their cathedral.”

“It’s not my (choir) loft, it’s the bishop’s resident church,” Kroepel told The Catholic Post. “Everyone should feel ownership of the cathedral. They should never feel that they can’t come and participate.”

“It’s not my (choir) loft, it’s the bishop’s resident church,” Kroepel told The Catholic Post. “Everyone should feel ownership of the cathedral. They should never feel that they can’t come and participate.”

Another goal is to assist in the formation of church musicians in the Diocese of Peoria. Kroepel plans to bring in clinicians to present workshops, something the priests and his colleagues have expressed interest in.

Expanding the Cathedral Schola is also on his list. The choir sings primarily at the 10:30 a.m. Mass on Sunday and for special celebrations at the mother church of the diocese. Membership is open to people of all backgrounds, regardless of musical expertise, he said.

What he is looking for, first and foremost, is “one who loves God.”

At the same time, Kroepel said he would never “shut the door” to someone who is struggling with belief because during this sung prayer “God may speak to that person’s heart.”

“Collaboration” is a word Kroepel likes to use.

“As a director, I don’t think I need to have my hands in everything,” he said. “I don’t need to direct everything, but sort of guide people. I can’t be an expert in all areas and we have a lot of talent in the diocese to draw on.”

That talent includes longtime pastoral musician Mary Ann Fahey-Darling, who has been asked to develop a festival choir that can sing for celebrations like ordinations and cathedral confirmations. She is currently director of sacred music at St. Anthony Church in Bartonville and for the St. Anthony Camerata Chorale.

“The bishop really likes a large choir, a large presence, and good, quality singing,” Kroepel said. “I know that Mary Ann will be able to help to establish a decent festival choir here.”

Kroepel has invited Jacob Cox, a member of the Cathedral Schola, to direct the children’s choir, Pueri Cantores. Children in pre-kindergarten through first grade are already in rehearsals and the older children will start in early spring.

There are also plans to restart a chant school, to help people learn and appreciate Gregorian chant. It’s an important musical form in the Catholic Church, according to Kroepel, who said these chants “enrich our music.”

Kroepel grew up in Hanna City and started piano lessons early on. He was interested in learning to accompany choirs from the beginning, a desire that grew at Farmington Central High School.

He started playing at St. Peter’s Lutheran Church in Glasford when he was 13.

Kroepel would go on to study with Dr. Sherry Seckler, former director of sacred music and organist at St. Mary’s Cathedral.

Kroepel served as director of music at a Methodist church in South Carolina for nine years before returning to central Illinois in 2014 to be closer to family. He started substituting for Seckler at the cathedral and then was named cathedral organist in 2015.

As time went on, he found himself drawn to the Mass and Catholicism. Not only did he admire the care Msgr. Stanley Deptula, director of the Office of Divine Worship, put into planning the liturgies, but also the meaning behind each gesture.

When Kroepel was received into the Catholic Church at the Easter Vigil at St. Mary’s Cathedral in 2016, a colleague played the organ so that he could fully enter into the prayer and sacraments.

He looks forward to returning the favor.

“I’m aiming to bring everyone to the next level, helping them to reach their potential,” Kroepel explained.

For more information on the Cathedral Schola or attending a rehearsal, call Kroepel at (309) 671-1550.