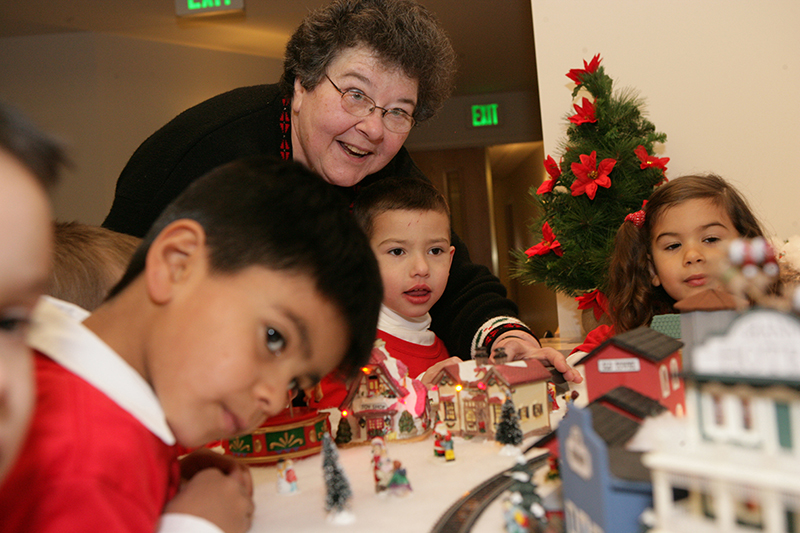 ROCK ISLAND — Benedictine Sister Mary Core didn’t start out to make a Christmas village that enchants children and adults who visit St. Mary Monastery from late Advent through the Christmas season. It just sort of happened.

What is more intentional is the focus on why Christmas is such a meaningful — as well as fun — celebration.

Among the young visitors Sister Mary sees each year are Benedictine Sister Stefanie MacDonald’s preschoolers from Our Lady of Grace Catholic Academy in East Moline. They perform a Christmas program for the Sisters and then get to explore the village with its hundreds of figurines, buildings, road signs, trees, lights, decorative surprises and a running toy train.

“When the kids come I say, ‘How many Santas can you find?’ There’s probably 15 or 20 different Santa Clauses,” said Sister Mary, who is director of liturgy at the monastery. “Then I say, ‘OK, here’s the really important question: how many Nativity scenes can you find?’”

Not only are there several located throughout the display, but a large Nativity scene that is one solid piece holds a place of honor at the center of the village.

Ever the educator, Sister Mary said, “I always try to make sure there’s something about Jesus.”

She bought the first nine pieces, which were advertised as jewelry boxes, for $7 about 30 years ago. They looked like houses and the idea was to use them as Christmas decorations. 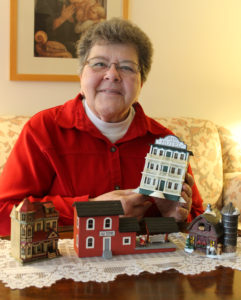 When Sister Mary put them out with some greenery for a Christmas party, many people commented on how nice the display looked.

“That was the beginning of a dangerous journey,” she said with a chuckle. “I’m one of those people who picks up things that are broken and repairs them. That’s what started to happen.”

Sister Mary salvaged three deer from a Christmas display that was damaged and then acquired an eight-piece plywood kit that she put together and painted. That added a train trestle, railroad station, hotel and Victorian house, among other structures, to the village.

“Nothing has cost me much of anything,” she said. “It’s a very eclectic village. I would put things together, add on things. Sometimes I’ve had people give me pieces and say, ‘If you want this you can have it.’”

One of her best finds came while she was teaching at St. Bede Academy in Peru. An old train set had been left in a cupboard and when no one claimed it she cleaned it up and added it to the Christmas village.

A favorite with children, the train left the track one too many times and had to be retired eventually.

“Little ones love to touch. I don’t mind if they touch — that’s just part of what little kids do,” Sister Mary said, noting that she resigned herself to doing without. That didn’t last for long, however.

A sale combined with a coupon from a generous shopper at Hobby Lobby put a train back in the village two years ago, much to the delight of all.

The newest addition to the village is a barn, in honor of her father, Darrell Core, who died in November. Sister Mary said her father had designed the barn for the dairy farm they lived on during her childhood, and it seemed a fitting tribute to him.

You don’t have to be a child to enjoy the Christmas village, though.

“What’s amazing to me is how many adults enjoy looking at it, too,” she said. “There’s something about imagination and displays that catch the Christmas spirit of people somehow.”

That’s important, because Jesus’ birth was God’s gift to us, she told The Post.

“When I think of Christmas, I think of the Holy Family, all families, the wonder and beauty of new life,” Sister Mary said. “It was, in my own family, a wonderful, wonderful time.”

Over the years, the celebration — like the Christmas village — has expanded.

“God loved us so much that this is what he did for us. He sent us his Son — with the wonder and the joy and the awe of what all that means for our salvation,” she said.

EDITOR’S NOTE: This story was included in special “Christmas Greetings” section of the Dec. 17 issue of The Catholic Post. To view the entire section, visit our E-Edition by clicking on the link in the blue bar at the top of this page.