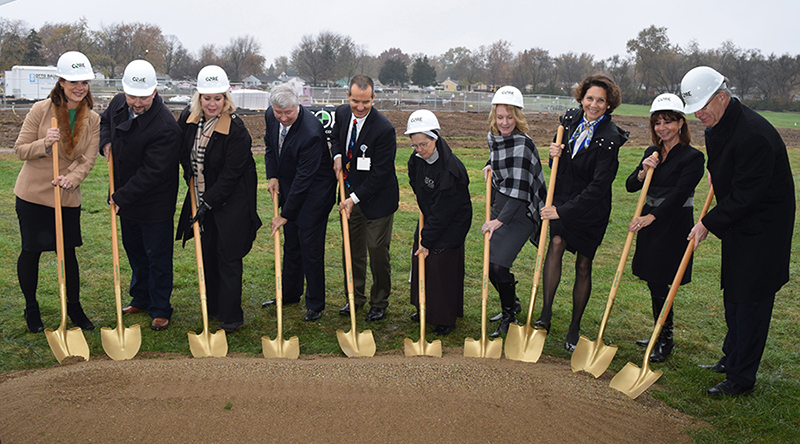 Proclaiming it “holy ground in the service of human life,” OSF HealthCare officials hosted blessing ceremonies Nov. 15 as construction began on an $8.5 million transitional home for children with complicated health needs to be located at 5200 N. Hamilton Road in Peoria.

The 21,000-square-foot home will be the third “Almost Home Kids” facility in the nation, with the other two in Chicago and Naperville. In Peoria, the home — built with private donations — will be owned and operated by the OSF HealthCare Children’s Hospital of Illinois. 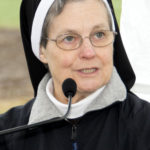 “It will be a place where God’s children can receive transitional care, but receive it in a very warm, loving, and homelike environment,” said Sister Judith Ann Duvall, OSF, chairperson of the board for OSF HealthCare System in welcoming remarks.

Prior to groundbreaking ceremonies, the building site was blessed by Deacon Joseph Knapp, pastoral care manager at OSF HealthCare Saint Francis Medical Center in Peoria. Deacon Knapp prayed for the safety of the workers, offered gratitude for “the gift of these children,” and asked blessings upon the donors and those who will serve at the facility.

RESPONDING TO A GROWING NEED

Sister Judith Ann and other speakers explained how the facility will provide 24-hour medical and nursing support for children with complex medical conditions who are ready to be discharged from the hospital, but their families need training on equipment and other aspects of preparing for their child’s return home.

Among those attending the ceremonies was Debbie Grisko, president and executive director of Almost Home Kids. She called the Peoria facility a “dream” that will serve families from throughout central and southern Illinois who formerly had to travel to Chicago for the care and training.

Grisko called the parents caring for these children “real heroes.”

“This is a day we’ve all been waiting for,” said Dr. Divya Joshi, chief executive officer of the Children’s Hospital of Illinois. “But the most important part about this new addition to our OSF family won’t be the structure itself, but the purpose for which it is built — to provide loving care to the most vulnerable of children.”

She and Kelly Nierstedt, president of Children’s Hospital of Illinois, expressed gratitude for the “generosity and tireless work” of the caring individuals whose support has moved the project closer to reality. Both cited a growing need for pediatric transitional care.

“We look forward to serving children and families here for many years to come,” said Nierstedt.

The 15-acre site is the former location of the Wee Tee Golf Center in Peoria.