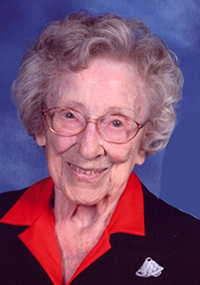 SHEFFIELD — Blanche E. Hewitt, who recently was featured in The Catholic Post as possibly the oldest Catholic in the Diocese of Peoria, died Nov. 25, 2017, at her home, surrounded by family and friends. She was 109.

The daughter of Alphonse and Carolina Vermeulen, Mrs. Hewitt was born Oct. 16, 1908, in Atkinson. She graduated from Sheffield High School in 1927.

Mrs. Hewitt worked at Farmer State Bank in Sheffield for more than 50 years, starting as a teller and retiring as the executive vice president. Her accomplishments during those years included helping area farmers keep their land during the Depression by writing notes so they wouldn’t default on their loans.

She enjoyed traveling and walking and followed her own advice, “just keep going,” throughout her long life.

Mrs. Hewitt is survived by her son, Conrad W. (Linda) Hewitt of Napa, California, and her daughter, Helen C. Hewitt of Brea, California, as well as four grandchildren, two great-grandchildren and many nieces and nephews. In addition to her parents and husband, she was preceded in death by her son, Niel; daughter-in-law, Shirley Hewitt; brothers, Joseph Vermeulen and Mike Vermeulen; sister, Helen Willey; and nephews, Bob Willey, Dr. Jerry Vermeulen, and Ron Vermeulen.