At 109, Blanche Hewitt of Sheffield follows her own advice: “Keep going” 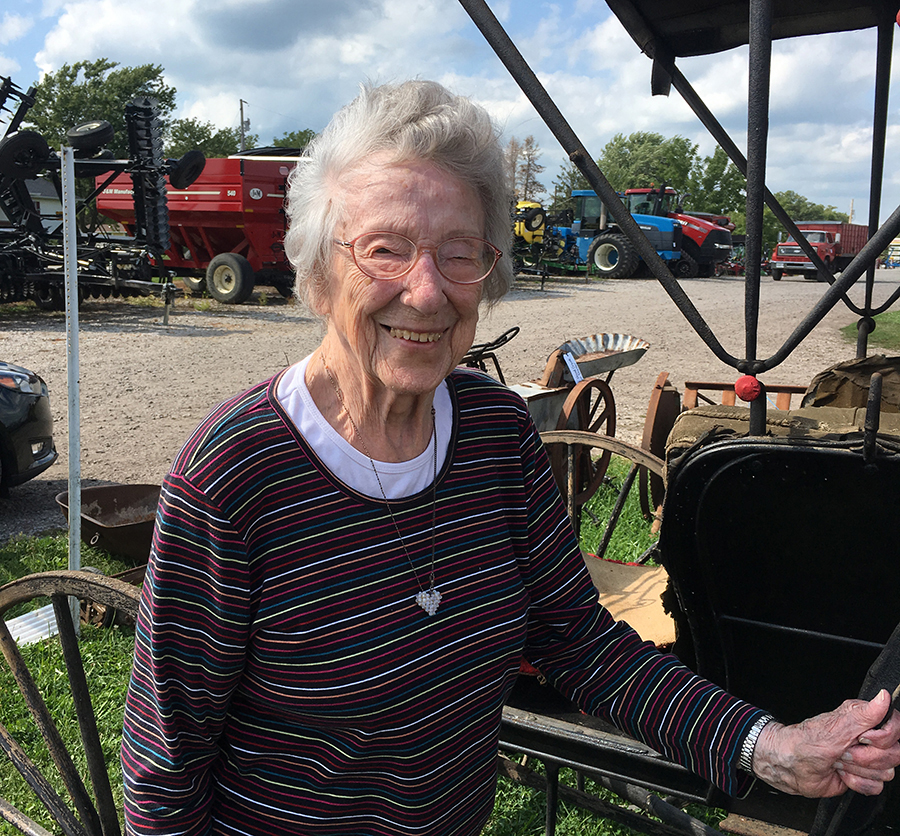 Blanche Hewitt stands next to a horse-drawn carriage, the only mode of transportation when she was born in Atkinson in 1908. A former bank executive, she continues to live in the Sheffield house she built with her husband and asks each morning, "What are we doing today?" (Provided photo/Terri Skiles)

SHEFFIELD — At 109, Blanche Hewitt could be forgiven for wanting to take things easy, but that’s not how she rolls.

“Every day she says, ‘What are we doing today?’,” according to her daughter, Helen Hewitt of California, who recently spent two weeks in central Illinois to celebrate her mother’s milestone birthday. “Her favorite saying is, ‘Keep going.’”

One of the things that has kept Mrs. Hewitt going for more than a century is her Catholic faith, said Helen. A longtime member of St. Patrick Church in Sheffield, Mrs. Hewitt is in all likelihood the oldest Catholic in the Diocese of Peoria.

“We were involved in everything,” Helen recalled.

Not as steady on her feet as she used to be, Mrs. Hewitt goes to Mass when she can and never fails to take her rosary to bed with her.

“Our faith has been the essence of our lives,” Helen told The Catholic Post by phone when a personal interview had to be canceled. Even though everyone was willing, you take things a day at a time at 109, she said.

That adaptability has been a hallmark of Mrs. Hewitt’s life.

Born Oct. 16, 1908, in Atkinson, Blanche Vermeulen was baptized and made her First Communion at St. Anthony Church. Her parents, Alphonse and Lina, worked on a farm for a long time and then moved their family to Mineral so Alphonse could work in the coal mines.

“Mom said when the company came to find new coal her father had a natural ability to know where it was and they would come to him to consult about where they should dig next,” Helen Hewitt said. “He was very, very good with his hands. It runs in the family.” 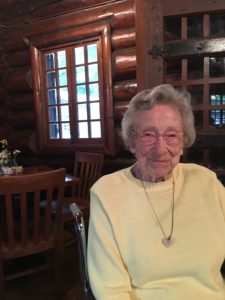 That helped when it came time to build a very simple house in the forest west of Sheffield, using timber from the trees that surrounded them. According to Mrs. Hewitt, they would take turns getting up every four hours during the night to add wood to the stove for warmth, and collected discarded newspapers to stuff between the boards in the walls to keep out the cold.

They walked five miles into Mineral to buy food and if they were lucky, a kind farmer would take Mrs. Hewitt and her three siblings home in his horse-drawn wagon. The family moved into Sheffield when the Vermeulen children started high school.

“She had many jobs and, of course, all four of the kids had to work,” Helen said. When Mrs. Hewitt started working as a waitress at a restaurant next to the bank, her fortunes changed.

The bank president often came in for coffee and after she graduated from high school he asked her to come and work for him.

“Mom starts to laugh when she tells this story,” Helen said, laughing herself. “She was thinking, ‘If I go to work in that bank and start at this much money, I’m making more in the restaurant with tips.’ Then she said to herself, “There’s no future as a waitress in this restaurant, but there’s a future in that bank.’”

Mrs. Hewitt started as a teller and was the executive vice president when she retired 54 years later. Helen said her mother was able to help people in many ways over the years, including writing notes for area farmers during the Depression so they didn’t have to make payments on their loans.

“So after the Depression the farmers didn’t lose their farms,” Helen said. “They thought my mother hung the moon, which she did, probably. She was very well-known and respected by everybody.”

While at a basketball game between Sheffield High School and Manlius High School, Mrs. Hewitt spotted a gifted athlete on the opposing team and said to her friend, “I’m going to marry that guy.”

Blanche Vermeulen and Kennison “Knute” Hewitt were married on June 12, 1935, at St. Patrick Church in Sheffield. In addition to Helen, they had two sons, Conrad, who is the oldest, and Niel, who was the youngest.

After they retired, the Hewitts often went to Hawaii to visit Conrad and then to California to see Helen on their return trip to central Illinois. Niel died earlier this year.

Mrs. Hewitt still lives in the house she built with her husband, who died in 1981.  She is assisted by Terri Skiles and her son Justin, who will continue to care for her after Helen, a longtime educator, completes her work with Stanford University and comes home to be with her mother next month.

“I tell Mom that I’m blessed to have her as a mother — and was blessed to have my father, too,” Helen told The Post. “She says, ‘No. I’m lucky to have you.’ She’s very humble.”