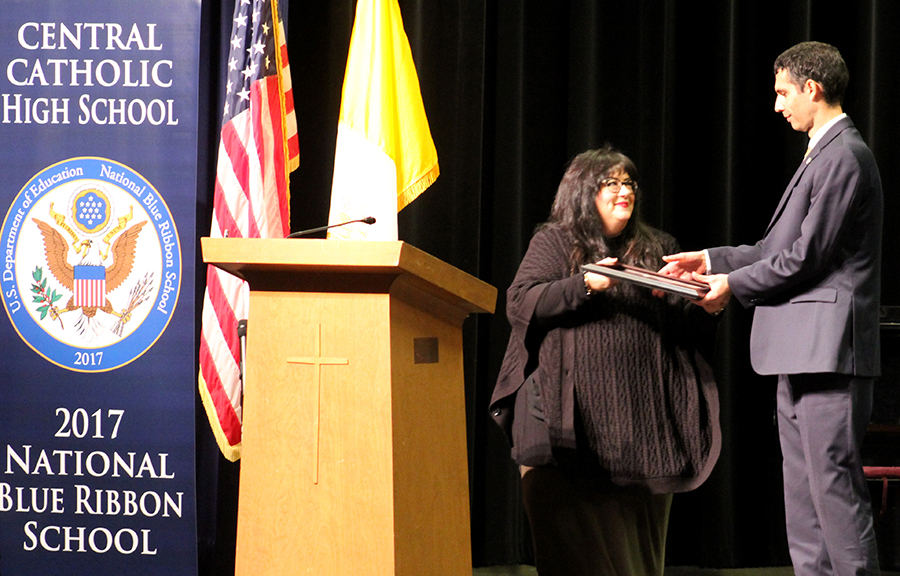 Dr. Sharon Weiss, superintendent of Catholic schools for the Diocese of Peoria, presents the plaque designating Central Catholic High School in Bloomington as a National Blue Ribbon School to principal Sean Foster at a celebration on Nov. 17. (The Catholic Post/Jennifer Willems)

BLOOMINGTON — Students, faculty and staff, families and benefactors of Central Catholic High School often say, “It’s great to be a Saint,” and now the U.S. Department of Education has joined the chorus.

Central Catholic was named a 2017 National Blue Ribbon School at the end of September, and the award came home from Washington, D.C., on Nov. 17 to cheers, applause and words of congratulation from local dignitaries, including Bishop Daniel R. Jenky, CSC, and students past and present. Following the ceremony, during which Dr. Sharon Weiss, superintendent of Catholic schools for the Diocese of Peoria, presented the Blue Ribbon plaque to Sean Foster, principal, there was a reception in the Student Center. 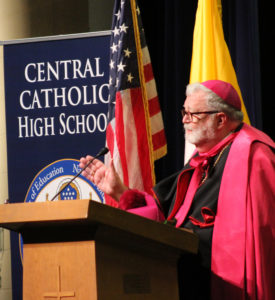 Bishop Daniel R. Jenky, CSC, offers a blessing for the students and faculty of Central Catholic High School and their guests as the celebration of the Bloomington school’s designation as a 2017 National Blue Ribbon School comes to a close Nov. 17. (The Catholic Post/Jennifer Willems)

“I couldn’t be more proud,” said Weiss, noting that Central Catholic makes the fifth high performing Blue Ribbon School in the Diocese of Peoria. The others are St. Vincent de Paul in Peoria (2010), Epiphany School in Normal (2011), St. Patrick School in Washington (2012), and The High School of Saint Thomas More in Champaign (2014).

“I know what it takes to be a Blue Ribbon School and I can’t thank the teachers and the staff, the students, the families, our alumni, all of our supporters, our past principals — all of those who have made this possible,” she said.

TRIBUTES FROM NEAR AND FAR

One of those past principals, Joy Allen, who retired in 2014 after 23 years of service, was among the special guests who attended the ceremony at Central Catholic last Friday. She was also featured in a video of those celebrating the national honor.

“Being named a Blue Ribbon School is an accomplishment and one that is earned through hard work by many, so congratulations. Once a Saint, always a Saint,” she said in her video tribute, referencing the school’s nickname.

“Your continued innovation and leadership in education are reflected in this national recognition. Keep up the great work,” said U.S. Rep. Darin LaHood, R-Illinois (18th District), on screen. He was also in the school auditorium for the celebration.

The video, which has been posted to the school’s website (blmcchs.org) and Facebook page, includes footage of students from Corpus Christi and St. Mary schools in Bloomington and Epiphany School in Normal cheering, jumping up and down, and in one instance doing “The Wave.”

TOPS IN THE STATE 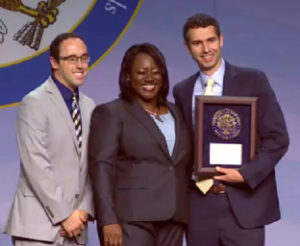 Central Catholic was one of 50 private schools nominated for the honor by the Council for American Private Education and was recognized in the category of “Exemplary High Performing.” It was the only Catholic high school in Illinois to be designated a 2017 National Blue Ribbon School.

Thanking everyone in the school community for their efforts on behalf of Central Catholic, Foster singled out two groups in his remarks.

First he praised the faculty and staff, past and present, “who believe in the mission of Central Catholic High School and who come to work every day ready to make a difference in our students’ lives.” Then he mentioned the students, saying it is their quest for academic excellence that has made Central Catholic a Blue Ribbon School.

“Not only do the students desire to succeed themselves, but they desire to see and help their friends or classmates succeed, as well,” Foster said. “I think that’s one of the reasons we are successful. We are blessed to have our amazing students.”

As much as they’ll continue to celebrate, Foster said awards like this “embolden us to reach higher, to achieve greater success.”

Bishop Jenky reminded them that the greatest teacher they’ll ever have is Jesus and the most important lesson is his Gospel.

“School, in the school of Christ, doesn’t end when you graduate from high school or university. It is a lifelong vocation,” the bishop said.

“You’re called Saints and you are to be a saint, not because you’re perfect, but because you know the Lord,” he explained. “His teaching is vital for our existence. To love God with our whole heart, mind, strength and soul and to love our neighbor as ourself — to learn and live that lesson is the secret of happiness.”

EDITOR’S NOTE: More photos from the Nov. 17 celebration have been posted to The Catholic Post’s site on Facebook.