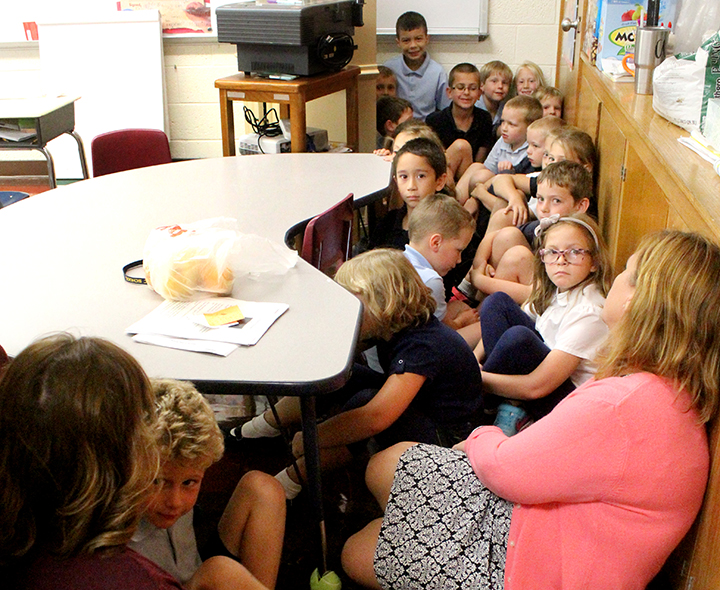 During a recent drill, the 19 students in Kathy Mazander's class at St. Mary School in Kickapoo were quietly huddled behind a desk with the lights off and the door locked within seconds. They didn't respond, even when principal Rick Pantages knocked on the door and rattled the handle. That's the goal, he said. In addition, reflective film has been placed on all the windows, so a potential intruder would not be able to look into the classrooms from the outside. (The Catholic Post/Jennifer Willems)

Every Catholic school in the Diocese of Peoria is expected to have an emergency preparedness plan in place and hold drills for a variety of situations, including if there is an active assailant in the building, tornadoes, fires, and even earthquakes. To make certain the schools have everything they need, consultants have been hired to visit each site and do a safety assessment.

They are Lt. Steve Roegge of the Peoria Police Department and Lt. Jon Quast of the Peoria County Sheriff’s Office. Joining them for an introductory session with the principals at the Spalding Pastoral Center in early September was Troy Erbentraut, disaster preparedness manager for OSF HealthCare Saint Francis Medical Center in Peoria.

“I hope this is a waste of your time,” Roegge told the school administrators. “Because then you never had to use anything you heard here.”

Erbentraut said first responders are not the people who arrive after a report is made, but the people who are standing there when the disaster happens. So it is vital for everyone to know what the plan is and how to execute it.

“Those who train perform better in stressful situations,” according to Roegge. “In the military and law enforcement we say we fight how we train.”

One of the lessons learned from previous incidents is that an immediate response is necessary. The longer an incident goes on, the more injuries there will be and more lives will be lost, he said.

People don’t “snap,” Quast said, noting that attacks are most often the product of understandable and discernible thinking and behavior.

The way to minimize threats is to create a culture that fosters care, concern and action, the officers said, emphasizing that all threats should be taken seriously. If a person’s behavior changes, if they are feeling bullied, if they increase their use of drugs and alcohol noticeably, pay attention, they said.

Creating safe and connected school communities, where students feel free to talk with teachers, staff and counselors can also help to spot a person in trouble before it reaches crisis mode, they explained.

The officers offered tips on how to welcome and identify visitors to the building, securing classrooms, how to respond to a violent incident and what to do if evacuation isn’t possible — hide, lock doors or block entry to the room, and silence cellphones and other electronic devices. Fighting an armed assailant should be the last resort, they said.

Dr. Sharon Weiss, superintendent of schools for the Diocese of Peoria, said schools — and increasingly churches — are targets. She told the principals it benefits the whole system to know that everyone has a crisis management plan, that the schools have held the drills mandated by the state, and that all sites are in sync.