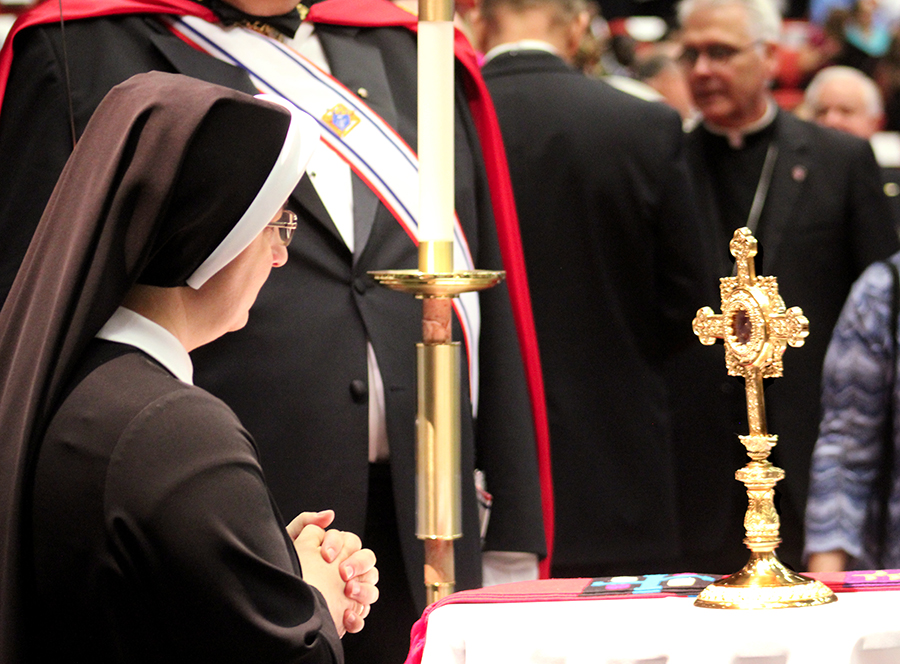 OKLAHOMA CITY — No one knows what will be asked of them when they make a commitment to follow Christ. Certainly Father Stanley Rother could not have known that he would be called to make the ultimate sacrifice when he volunteered to serve in the Archdiocese of Oklahoma City’s mission in Guatemala.

But on Sept. 23, he became the Catholic Church’s newest example of heroic faith that will inspire people for generations to come when he was declared Blessed Stanley Rother. He is the first American-born priest — and the first martyr from the United States and Guatemala, where he served for 13 years and died for the faith — to be beatified.

His was only the second beatification in the United States. 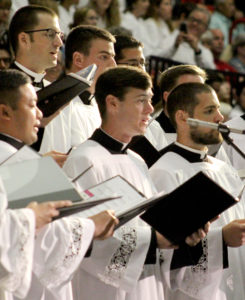 The Mass drew more than 20,000 people to the Cox Convention Center in Oklahoma City, including several who minister in the Diocese of Peoria or are preparing for ministry in central Illinois.

“For us it’s inspirational,” said Danny McShane of Lincoln, one of 16 seminarians in the Mount St. Mary’s Seminary Schola, which sang for the Mass. He is in his third year of theology studies at the Maryland seminary, where Blessed Rother completed his studies for the priesthood.

“Who knows what’s in store for us and our future? We’re going to lay our lives down in whatever way God wants us to,” McShane told The Catholic Post. “We don’t want to back down from that, even if God calls us to give our lives.”

He said knowing the story of Blessed Rother and being a witness to his beatification “makes me want to be a better priest one day and a better man, a holy man of God. It’s encouraging. It’s challenging.”

One of Blessed Rother’s favorite places to pray at “the Mount” was a little grotto that is close to the seminary. There’s a plaque there now and as the seminarians walk by on the way to Mass each day, they remember him, McShane said.

“He was the shepherd who didn’t run from the wolf. He could have easily run away and been safe, but he stuck with it and saved his people and shed his blood like Christ did,” the seminarian said. “For us, he’s another model of heroic virtue. We’re blessed to have him.”

Born March 27, 1935, in Okarche, Oklahoma, Father Stanley Rother was raised on his family’s farm. He began his studies for the priesthood at a seminary in Texas, but was asked to leave because he could not master the Latin needed for the courses.

He fared better at Mount St. Mary’s Seminary in Emmitsburg, Maryland, and was ordained on May 25, 1963, for what was then the Diocese of Oklahoma City and Tulsa. After serving as a parish priest in Oklahoma for five years, Father Rother volunteered for the diocese’s mission in Guatemala, where he ministered to the Tz’utujil people at Santiago Atitlan.

While he had struggled with Latin, Father Rother learned Spanish and would go on to help translate the New Testament into Tz’utujil so his people could read Scripture in their own language. 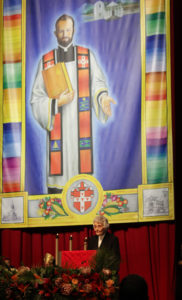 With the banner of her brother, Blessed Stanley Rother, hanging behind her, Sister Marita Rother, ASC, proclaims the first reading at the Mass for his beatification. The liturgy drew more than 20,000 people to the Cox Convention Center in Oklahoma City on Sept. 23. (The Catholic Post/Jennifer Willems)

Many parishioners and catechists were killed during the civil war that was taking place, and in time Father Apla’s, as he was known, learned that his name was on a death list, too. Called back to Oklahoma, he returned to Guatemala because “the shepherd cannot run.”

The cause for Father Rother’s canonization was opened in Oklahoma in 2007, and Pope Francis recognized him as a martyr for the faith on Dec. 2, 2016. A miracle was not needed for his beatification because “that is considered the most perfect way to follow Christ, following him all the way to your death,” according to Msgr. Jason Gray, a priest of the Diocese of Peoria who worked for the Congregation for Saints’ Causes from 2012 to 2015.

A miracle attributed to his intercession is required for the cause to proceed to sainthood, said Msgr. Gray, now pastor of St. Thomas the Apostle Parish in Peoria Heights.

“SOMEONE FROM THIS CENTURY”

Even before the Mass began, people lined up to venerate a relic of Blessed Rother — a bone fragment of one of his ribs. It was attended on either side by a Fourth Degree member of the Knights of Columbus.

Taking her place in line was Sister M. Loretta Matas, regional superior of the Lacon-based Daughters of St. Francis of Assisi. She was in Oklahoma City with three other members of her community, including Sister Clare Key, DSF, of Lacon.

“He lived what he believed,” Sister Loretta said simply, noting that Blessed Rother is someone from this century, who still has family living. “This is not someone from the third or fourth century. He was young and dedicated his life to the poor and his vocation, the priesthood.”

Being present at the beatification, rather than watching the ceremony take place in Rome, was also significant for her and her Sisters, she said.

“It’s a blessing, really,” she told The Post. “I hope we will get many graces from him.”

“We all know we make commitments to serve the Lord, but it is particularly impressive, I think, when you see someone who serves even to the point of death, even to that willingness to die for the faith or for their people,” Msgr. Gray said.

“It becomes a model to emulate and makes us think,” he said. “We look to people of courage, such as Blessed Stanley Rother, as a model for ourselves, to imitate that same kind of desire to serve.”

There was great joy in the arena when Archbishop Paul S. Coakley of Oklahoma City said the mercy and love of God had not been exhausted, and he looked forward to the day when Blessed Rother would become a saint.

“To me, this is a step into that. It’s wrapped up in what’s happening today,” Sister Marita Rother, ASC, the sister of Blessed Rother, told the press. “Even if this is the end of it, as far as that, he’s a saint to the rest of us.”