BLOOMINGTON — Central Catholic High School has been named a National Blue Ribbon School by the U.S. Department of Education. The announcement was made on Sept. 28 by Secretary of Education Betsy DeVos.

One of 50 private schools nominated for the distinction by the Council for American Private Education, Central Catholic was the only Catholic high school in Illinois to receive Blue Ribbon status. Principal Sean Foster will travel to Washington, D.C., Nov. 6-7 for the honoring ceremony. 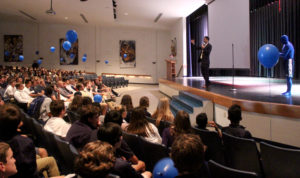 Principal Sean Foster announces that Central Catholic High School in Bloomington has been named a National Blue Ribbon School at an assembly on Sept. 28. The blue balloons were among the hints the students received, as was “Blue Man” Kevin Cook (far right), director of advancement at Central Catholic. (The Catholic Post/Jennifer Willems)

A celebration in Bloomington is being planned for when he returns.

Central Catholic is the fifth school in the Diocese of Peoria to be named a National Blue Ribbon School in the last seven years, following St. Vincent de Paul School in Peoria, 2010; Epiphany School in Normal, 2011; St. Patrick School in Washington, 2012; and The High School of Saint Thomas More in Champaign, 2014. It was recognized as an “Exemplary High Performing School.”

“This is a great honor for us. It really means we’re heading in the right direction,” Foster told The Catholic Post. “This is not a culminating event, but a recognition that we’re doing things well.

“But it’s also a challenge,” he said. “Every day we strive to do things better, we strive for excellence.” 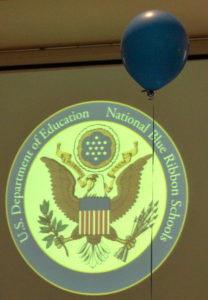 There are more than 132,000 public and private schools in the nation, but only 342 received the 2017 National Blue Ribbon award.

“In order to be eligible for that, our standardized test scores have to be among the top 15 percent in the nation,” Foster told The Catholic Post, adding that Central Catholic hit that mark last year.

“For the last four years our ACT scores have improved annually and we’re at 25.5 this year,” he said. “The state average is 21.4 and the national average is 21.”

Dr. Sharon Weiss, superintendent of schools for the Diocese of Peoria, said she is very proud of what Central Catholic has accomplished.

“Having served as the principal of one of our diocesan Blue Ribbon schools, I know firsthand about the tremendous effort and vision that goes into curriculum alignment and instructional improvements in order to qualify as a nominee,” said Weiss, who was at St. Patrick in Washington before being named superintendent in 2012. “Furthermore, the application process is rigorous!”

That makes the acknowledgement by the U.S. Department of Education “an incredible honor and affirmation of all the good work that the clergy, administration, teachers, staff, students, families and supporters have put forth to achieve this award,” she said. “Well done, CCHS Saints!”

Central Catholic’s 329 students knew something was up on Sept. 28 because a “blue” theme ran throughout activities that day. English teacher Kayla Blue gave the morning announcement, blue slushies were served as a treat at lunch, and music that had titles or lyrics with that color or songs sung by bands like the Blues Brothers were played as they passed from one class to the next.

The faculty and staff also wore blue items of clothing. Kevin Cook, director of advancement for the school, took that one step further by dressing like a member of the Blue Man Group and walking through the halls.

At the end of the day, the students encountered blue balloons as they walked into the auditorium for the announcement, which brought boisterous cheering. 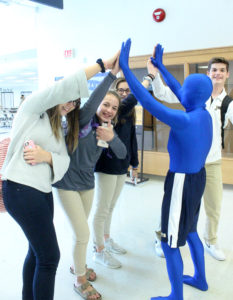 “Blue Man” Kevin Cook offers high-fives to Central Catholic students after the announcement. “We wanted to have a lot of fun doing this,” said Sean Foster, principal. (The Catholic Post/Jennifer Willems)

Before he dismissed them, Foster asked the students to show their appreciation for the faculty and staff for the role they played in making Central Catholic great. Then he asked them to stand and give each other a round of applause.

“We wanted to have a lot of fun doing this. We have a really strong faith-based school. We have excellent academics. But we want to have fun while we do that,” the principal said. “This was a great way for us to celebrate with our students and allow them to be part of the celebration in a way that is meaningful to them.”

Not only does everyone at Central Catholic believe in the school’s mission, but they come to work ready to make a difference every day, he said.

“Every one of us stands on the shoulders of our predecessors with the lofty goal of continuing to move Central Catholic forward,” according to Foster. “I could not be more proud of our students, the Saints Family and of everyone who made this possible.