The logo being used for the 150th anniversary of St. Mary Parish in Bloomington was designed by Donna Williams, who won a contest held earlier this year.

BLOOMINGTON — Many things have changed over the last 150 years, but the faith of the people who make up St. Mary Parish here remains strong. They will celebrate that faith at a Mass with Bishop Daniel R. Jenky, CSC, this Sunday, Sept. 10.

To accommodate parishioners and guests who want to take part in the sesquicentennial celebration, the Mass and brunch that follows will be held at Central Catholic High School in Bloomington. All of the seats are spoken for, according to Father Greg Nelson, pastor. 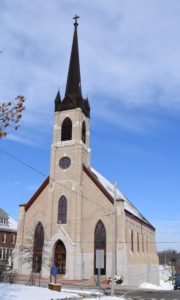 Among the 514 people who are expected to attend are Father Ric Schneider, OFM, who served as pastor for 23 years, and Brother Kevin Duckson, OFM, who was the pastoral associate for 20 years. The Franciscans left in May, along with Father Neri Greskoviak, OFM, when pastoral care of St. Mary was returned to the Diocese of Peoria.

The logo being used for the 150th anniversary was designed by Donna Williams, who won the contest held earlier this year.

As a nod to St. Mary’s German heritage, parishioner Andy Bordewick brewed a special Oktoberfest beer for the occasion. He has donated 14 six-packs and 12 of them will be sold during the silent auction at the brunch.

Those without reservations will have a chance to help the community continue the celebration at the Kermes Festival, which honors the culture of the parish’s Hispanic community, on Sunday, Sept. 17. Mexican food and music will be available from 11 a.m. to 4 p.m. in the east lot of the church at 527 W. Jackson.

Parishioners will gather again from Sunday, Nov. 5, through Tuesday, Nov. 7, for a mission given by Father Dennet Jung, OFM. He was the parochial vicar at St. Mary from 2008 to 2009.

Established as a mission church of St. Mary in Lincoln in 1867, St. Mary in Bloomington was originally designated as a national church for German-speaking Catholics. A small wooden frame church was built in 1869, and St. Mary was named a parish with a resident pastor, Father Francis X. Schreiber, in 1877.

Members of the Order of Friars Minor of the St. John the Baptist Province assumed responsibility for St. Mary in 1881 and would continue the relationship for 135 years. When the Franciscans withdrew in May, they were the last members of their community to serve in central Illinois.

By 1885, a building committee was established and a new church was built. When it was dedicated in 1887, it had the tallest spire in Bloomington. A pipe organ was installed in 1922 and refurbished in 1991.

The combination convent and school built in 1902 was replaced in 1955. A wing with eight classrooms was added in 2003.

Renovation of the church interior was undertaken in 1962 and 1996. In 1962, a chapel was also constructed between the church and friary to the west.

Because of its outreach to the community, as well as the emphasis on serving God and neighbor, St. Mary has come to be known as “the action on Jackson.”

Started with about two dozen families, St. Mary has more than 1,200 families today.