“What did you do this summer?” These students served others on mission trips 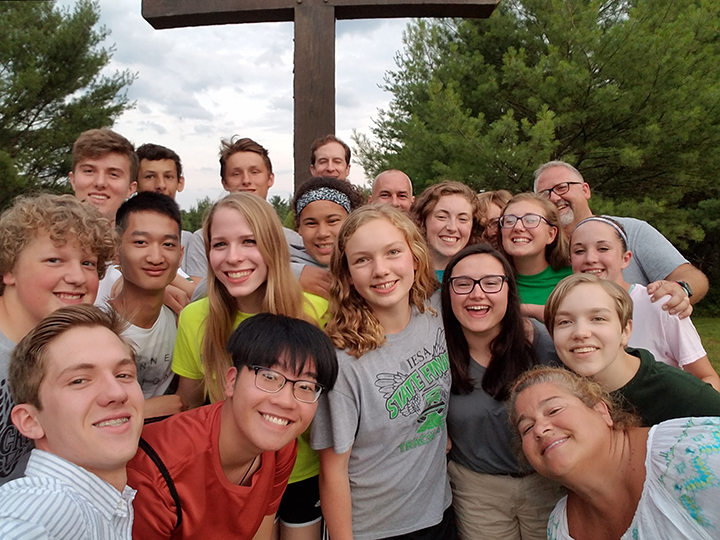 Those taking part in a mission trip to rural Pennsylvania with the CREW youth group from St. Patrick Parish in Urbana pose for a selfie in front of a cross at the Anawim Community, a congregation of Sisters based in Frenchville. (Provided photo)

As schools reopen and Catholic students from central Illinois are asked by classmates “What did you do this summer?,” hundreds will be able to answer that they served others by taking part in mission trips.

“What makes mission trips so special is the ability to live out the faith through the call to service,” said Kayley Schacht, an incoming senior at The High School of Saint Thomas More in Champaign who was one of 15 teens traveling to Pennsylvania in late June with the youth group from St. Patrick Parish in Urbana. There they assisted a group of Sisters in their outreach to the rural poor in north central Appalachia — fixing roofs, visiting seniors in a nursing home, even painting a bandstand in a public park. 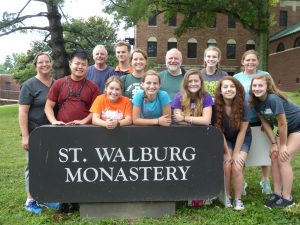 Those from St. Bede Academy in Peru taking part in the “Living Out Loud” Christian service experience are shown at St. Walburg Monastery in Covington, Kentucky. (Provided photo)

“You get to be the hands and feet of Christ in the world, and seeing the difference that makes in your life and the lives of those around you is priceless,” added Schacht, who was making her second mission trip with the parish youth group known as CREW — Christ Renews Everyone’s World.

Other mission trips made known to The Catholic Post included:

“A SINCERE GIFT OF SELF”

“I’m always continually moved at how many graces the Lord pours out into the student’s hearts,” said Sister Sara Kowal, SCTJM, who serves on the Peoria Notre Dame campus ministry team. This was the fifth year the school sponsored Miami mission trips, and the number of students taking part grows each summer. 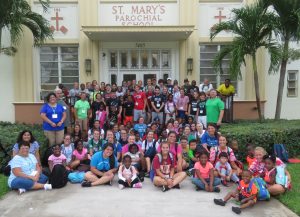 Zika said the trip taught her the truth of a favorite quote of St. John Paul II from the Vatican II document “Gaudium et Spes”: “Man cannot fully find himself except through a sincere gift of self.”

“I learned that no matter how young you are,” said Zika, “you can always find a way to give the gift of yourself and make a difference in this world.”

Mission trips often lead participants to be more grateful for the good things they have and break stereotypes they might have had about those in poverty, said those taking part in the St. Bede mission trip.

“Our situations that we complain about daily can seem like a wonderful life to many less fortunate,” said Kevin Lu, who has gone on the St. Bede mission trip three consecutive years. This year, the students’ days were filled with working with children and the elderly, serving and eating at soup kitchens; cleaning, painting, and yard work at social agencies; or visiting homeless shelters. The days began and ended with prayer.

“There’s always so much more to people than what’s only on the outside,” said Lu. “Talk to someone to actually know them instead of making judgments based off appearance.”

A special memory that Karlee Feinen, a sophomore at Champaign Central High School, took home from the Urbana parish’s mission trip to Pennsylvania was an hourlong conversation she had with a female nursing home resident.

“I wish I could have stayed and talked more,” said Feinen.