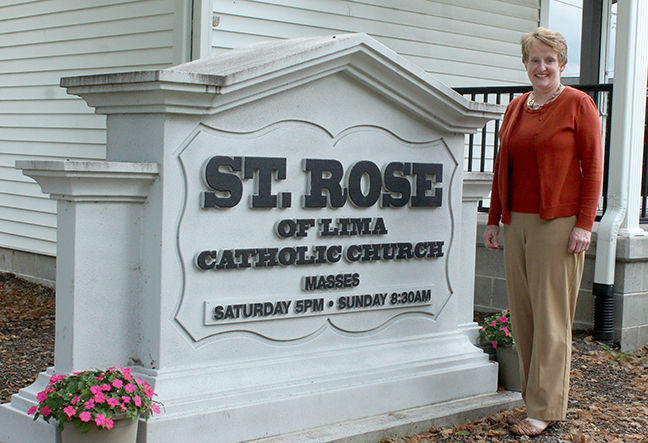 Ellen Ehrgott, the new chair of the Bishop's Commission on Women in the Church and in Society, has been involved in just about every aspect of parish life at St. Rose in Rushville. (The Catholic Post/Jennifer Willems)

RUSHVILLE — Ellen Ehrgott’s family calls her “the church lady,” but she says it’s not true.

It’s hard not to agree with them.

A speech language pathologist working with students at two different schools, she is or has been involved in just about every aspect of parish life at St. Rose. That may slow down a bit, she said, but only because of her new role as chair of the Bishop’s Commission on Women in the Church and in Society.

Ehrgott succeeded Deena Pavinato of Holy Family in Oglesby in May. Serving with her are Crystal Quick of Immaculate Conception in Manito, vice chairperson; Kimberly Lange of Blessed Sacrament in Morton, secretary; and Sunita Kottoor of St. Vincent de Paul in Peoria, treasurer. 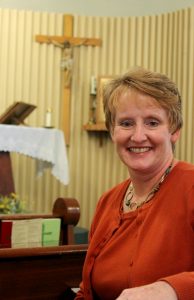 “It’s enlightening to meet women from all over the diocese,” says Ellen Ehrgott, shown inside St. Rose Church in Rushville. (The Catholic Post/Jennifer Willems)

Father David Whiteside, pastor of St. Patrick in Havana, Immaculate Conception in Manito, and St. Mary in Lewistown, is the group’s spiritual adviser.

The commission was established “to communicate a more profound understanding of the dignity and gifts of women in Catholic life and church teaching through prayer, study, and action rooted in sacred Scripture and tradition.”

Not only does it act as an advisory group on women’s issues to Bishop Daniel R. Jenky, CSC, but it also seeks to help women become holier and closer to God. One way this is done is by providing opportunities for prayer and fellowship.

Ehrgott, who has lived in the Rushville area for 23 years, understands the need for and benefit of that.

“Rushville is geographically distant from Peoria — you can feel disconnected,” she said during an interview in the parish hall of St. Rose Church. “It’s enlightening to meet women from all over the diocese.”

What people tend to discover, she said, is that they’re all the same.

One thing they share is the need to develop spiritually and grow closer to God on the journey they take through life, Ehrgott said. At the beginning of her four years on the commission, that involved pilgrimages to holy sites in Spain and Portugal, as well as shrines in Chicago and Wisconsin.

“We had good attendance and met some wonderful people,” she told The Catholic Post. “But for many women in the diocese, travel is not a part of their life right now.”

To meet the needs of those women — married and single — who are not able to leave home for an extended period, the Bishop’s Commission on Women also has offered half-day retreats at locations in central Illinois. For example, a retreat is being planned for Nov. 11 at Nazareth House in Henry.

Another opportunity for prayer sponsored by the commission is a Holy Hour for Priests that will take place at eight parishes around the diocese on Aug. 4, the Memorial of St. John Vianney.

Ehrgott said she learned about being inclusive and chipping in where needed as she was growing up in small towns and attending church with her parents in the Diocese of Springfield. Her mother and father were involved in teaching religious education classes and cleaning the church, among other things, and her brothers served at Mass.

She and her husband of 34 years, Matt, raised four boys of their own, so she took care of the cassocks for the altar servers, has been active in the Altar Society, orders supplies, helps with the bulletin now and then, cleans the church — you name it.

She credits the good role models she’s had at St. Rose and said, “It really does take a village to keep a parish going.”

Ehrgott is also an “active grandma” to her six grandchildren, taking them swimming, horseback riding, boating, and on trips to parks and fairs. “I work in education, so everything has a learning opportunity,” she said.

And in their spare time, the Ehrgotts are renovating a house from the studs out.

She just smiles. She wouldn’t have it any other way.