Chillicothe parishioner, 101, is honored for a lifetime of extraordinary service 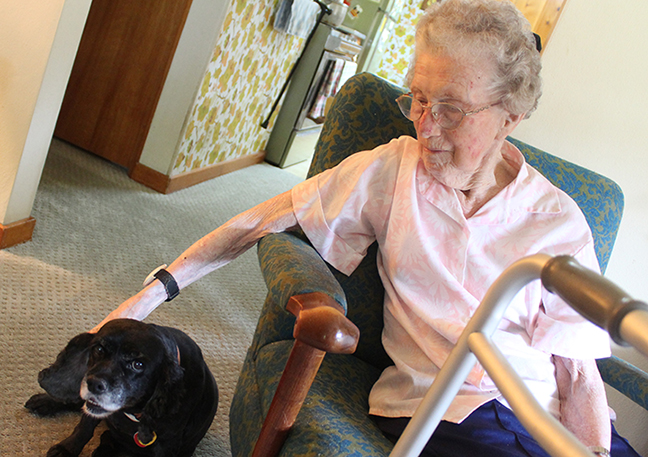 "You've got to keep going," said Ruth McLaughlin, 101, shown with her dog, Lilly, at the cozy house they share in Chillicothe. (The Catholic Post/Jennifer Willems)

CHILLICOTHE — You won’t find Ruth McLaughlin sitting around watching television. In fact, sitting around is something the centenarian has never been very good at.

“You’ve got to do something. You’ve got to keep going,” said Mrs. McLaughlin, 101, during a recent visit. “When you’re doing things you like to do, you don’t give it a thought.” 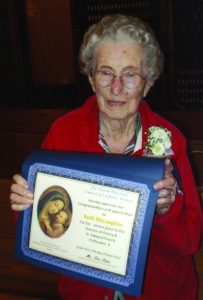 Ruth McLaughlin is shown with her certificate of appreciation from the Diocesan Council of Catholic Women. (Provided photo)

What she considers ordinary, however, her many friends at St. Edward Parish in Chillicothe find extraordinary. They nominated her for an Outstanding Volunteer Award from the Peoria Diocesan Council of Catholic Women and were overjoyed to hear her name read at this year’s appreciation luncheon.

While she wasn’t able to attend the event and receive her certificate from Bishop Daniel R. Jenky, CSC, she was honored soon after at a weekday Mass at St. Edward, her lifelong spiritual home.

The list of her volunteer activities at church is long: counting the collection, organizing greeters, helping with funeral dinners, assisting with fundraisers. Mrs. McLaughlin also served as an extraordinary minister of Holy Communion for many years and said, “I always enjoyed that.”

She particularly liked helping the priests at St. Edward by opening the church and setting up the altar for Mass when they were on vacation and visiting priests were expected. “It means so much to you when you can do things like that,” she said.

In addition, Mrs. McLaughlin was an active volunteer for the VFW Post 4999 Auxiliary for 60 years. That was important to her since her husband of 47 years, Lee, had served in the U.S. Army during World War II.

When a site was being sought for the new Veterans Memorial Park in Chillicothe, she donated land for the project. It is located across the street from her little house.

“It’s the nicest spot,” she told The Catholic Post, noting that many people drive by it each day. “Everybody can see it.”

Her service to her community didn’t end there.

She was elected to the Chillicothe Township Board of Trustees and served for 32 years. Even after losing her final election in 2013 at the age of 97, she continued to answer the phone as a volunteer.

Mrs. McLaughlin learned about hard work and service while helping her father tend their prosperous vegetable patch in South Rome. Noting that “I worked all my life,” she waited tables, worked at Kroger for 10 years, was a clerk at two drug stores in town for a total of 42 years, and helped customers at a jewelry store for five years.

She no longer drives, so her activity is more restricted now, but is thankful for friends who take her to church and help out around the house. She is kept company by a protective black Cocker Spaniel named Lilly and a bird who chirped tunefully throughout the interview.

Mrs. McLaughlin is also thankful for her Catholic faith.

“Everybody should have something like that to keep going,” she said simply.