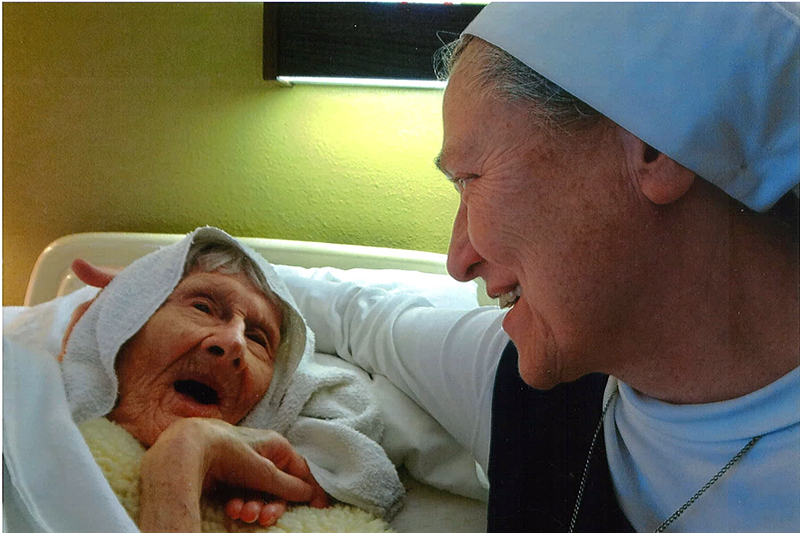 No words are necessary to recognize the bond between Sister Norberta Piekos and Anna Pomatto, 103, a resident of Aperion Care Spring Valley. This photo, taken by Anna's daughter, Ann, won first prize in the "People, Events, and Everyday Life" category of a photo contest sponsored by Spring Valley Boosters. (Provided photo/Ann Pomatto)

SPRING VALLEY — When Sister Norberta Piekos visited nursing home resident Anna Pomatto a few days after her 103rd birthday, Mrs. Pomatto’s daughter, Ann, thought to ask the pastoral care worker from the LaSalle Catholic Parishes to pose with her for a selfie.

But Sister Norberta had another idea for a photo that February day at Aperion Care Spring Valley.

“What about taking a picture of me with your mom?” she asked.

“If was a moment in time I caught accidentally. I thought, ‘Gee, that’s a near pro-life picture.'” — Ann Pomatto

A click later, Ann had a treasured photo that on June 3 was named a first-place winner in the “People, Events, and Everyday Life” category of a photo contest sponsored by the Spring Valley Boosters.

“It was a moment in time I caught accidentally,” Ann told The Catholic Post this week after Father Jacob Valle, parochial vicar of the LaSalle Catholic Parishes, submitted the photo to the diocesan newspaper for consideration.

When she first saw the depth of expression she had captured between her mother, who now has very limited speech, and Sister Norberta, Ann thought “Gee, that’s a neat pro-life picture.”

It is also a photo that demonstrates the service of those in consecrated life. While eyes might go first to the enthusiasm evident in the face of the 103-year-old, Ann hopes viewers take note of Sister Norberta’s gaze.

“It shows her caring,” she says.

Sister Norberta visits the nursing home weekly as part of her commitment to the sick and homebound throughout the Illinois Valley.

While Anna Pomatto, a lifelong Spring Valley resident, is sometimes sleepy when she visits, Sister Norberta said she always prays with her.

“When she’s awake, she will show she appreciates your coming,” said Sister Norberta. “That’s the facial expression you see.”

When she learned of the local contest, a first-time effort in conjunction with Spring Valley’s Outdoors Festival on June 3, Ann remembered the photo and entered. While the first-place award earned her $100 worth of certificates to local businesses, she said she’s grateful for the prize but there’s something more important.

“I just thought it was a neat picture,” she said.