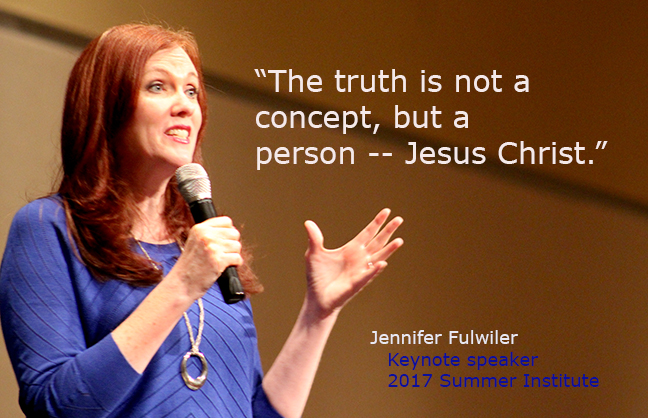 When Jennifer Fulwiler was in the fourth grade, she went into a book store and moved all the Bibles to the fiction section, thinking it was the ultimate prank on people who should know better.

Little did she know then that the Good Book would become one of the most important books in her life and help her to discover the source of all truth, Jesus Christ. 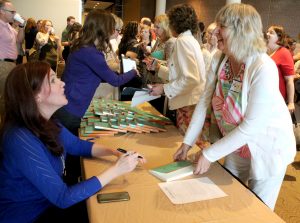 Between her keynote talks, Jennifer Fulwiler chatted with Summer Institute participants and signed copies of her book, “Something other than God: How I Passionately Sought Happiness and Accidentally Found It.” (The Catholic Post/Jennifer Willems)

The nationally known writer, speaker, radio host and former atheist was the keynote speaker for the 2017 Diocesan Summer Institute, which was held June 3. The event drew 800 people — mostly teachers, principals and catechists — to the Peoria Civic Center for “The Splendor of Truth.”

Hosted by the Diocese of Peoria, the Summer Institute was planned by the diocesan Office of Evangelization and Faith Formation, Office of Catholic Schools, and Office of Priestly Vocations.

In addition to the opening and closing keynotes by Fulwiler, the day included a Holy Hour with Benediction. During adoration, the sacrament of reconciliation was available at makeshift confessionals that dotted the hallways outside the main conference room.

After lunch, participants also had the opportunity to attend one of four breakout sessions:

The Summer Institute closed with Mass at St. Mary’s Cathedral in Peoria, where Bishop Daniel R. Jenky, CSC, welcomed the participants. Reminding them that the Summer Institute coincided with the Vigil of Pentecost, he said, “I am more and more convinced that today the Diocese of Peoria needs a spiritual conversion and a more profound renewal of all the transforming gifts of the Holy Spirit.” (See the related story.)

At last year’s renewed Summer Institute, keynote speaker Dan Burke, founder of the Avila Institute for Spiritual Formation and executive director of EWTN’s National Catholic Register, said that to win hearts for Christ it is important to remember that “Love builds a bridge over which truth may pass.” 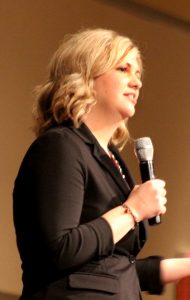 “Not telling (people) the truth is not authentic love,” said Shirley Plaag, diocesan director of evangelization and faith formation. (The Catholic Post/Jennifer Willems)

Shirley Plaag, director of Evangelization and Faith Formation for the Diocese of Peoria, said this year’s conference was designed to build on that.

“What is truth? What does it mean to encounter Jesus Christ who is truth and have that really transform your life,” she asked the 800 people sitting before her. “Often in our society, we’re not telling people the truth. Not telling them the truth is not authentic love.”

For Fulwiler, it was the search for truth that led her from atheism to the Catholic Church.

“I was always an atheist. I didn’t believe in God, even as a child,” she said, noting that for a long time she didn’t even put a label on it. It was something she picked up from her father, who was an engineer and very logical.

She found her worldview shaken after she married her husband, Joe, and they had their first baby. Looking at him, Fulwiler tried to explain his existence and her feelings for him logically and failed.

“I knew like I knew the sun would come up each morning that the love I had for this child came from outside,” she said. “That was the first moment I was no longer an atheist. There was something else out there; this love had a source.”

Fulwiler informed God that she was ready to hear from him — and was surprised when she didn’t hear anything back.

She looked at Buddhism and then read “The Case for Christ,” which was written by a former atheist. While it didn’t convert her, it got her thinking and wanting more. She asked, “What if?’ What if God did exist?” and literally got dizzy at the question.

Fulwiler bought a Bible and started to read, becoming intrigued by the person of Jesus Christ. But it raised more questions: “Who is Jesus Christ?”

Searching for an authentic source, she started a blog as a means of engaging people in conversation. In time she received the answers she was seeking: “What if, before he ascended to heaven, Jesus founded a church, one church, that was established with his authority?”

Fulwiler talked to her husband, who had been a lukewarm Christian, and said, “We have nowhere else to turn. No other option makes sense.” 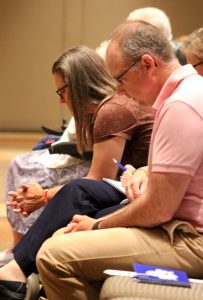 Jay Brooks of St. Catherine Parish in Aledo bows his head in prayer and reflection as the 2017 Diocesan Summer Institute opened at the Peoria Civic Center June 3. (The Catholic Post/Jennifer Willems)

As they read what the Catholic Church said about itself and looked at the Catechism of the Catholic and the teachings of St. Augustine and others, “it was like we found the owner’s manual for the soul,” she said. “It was like the church knew me better than I knew myself.”

Eventually Fulwiler realized that “the truth is not a concept, but a person — Jesus Christ.”

As she was preparing to be baptized and received into the church, she found a box with her baptismal candle in it. While her mother had fallen away from the church, her grandparents insisted that she be baptized as a baby.

“I was sealed with that indelible mark, a grace that could not be washed away,” she said.

In her closing keynote address, Fulwiler offered suggestions for how to evangelize others, including friends and family.

“Each person has their own unique message they need to hear,” she said. “you need a custom approach where you treat each person differently.”

It will require the head, the heart and the Holy Spirit, she continued, explaining that while it is important to know what you believe and why, people must lead with their hearts: “We have to love them first. It gives you an opportunity to build a bridge over which truth can pass.”

In the end, it’s up to the Holy Spirit because “conversion is God’s work, not ours,” she said. “Talk about what God has done for you.”

Fulwiler cautioned that God would probably not use them as the primary agent of a loved one’s conversion, but they must give up control and trust the Holy Spirit.

“There are a million different ways God can use you,” she assured them.