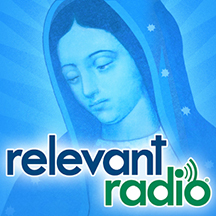 DAVENPORT, Iowa — While Lent is coming to an end, it’s never too late to give up something in order to grow in holiness and help others do the same. That can be as easy as adjusting the radio dial, according to Michael Tarpey.

A member of St. Pius X Parish in Rock Island, Tarpey worked with a group of Catholics in the Quad Cities to bring Catholic radio to the Mississippi River Valley 12 years ago. KTJT debuted at 102.7 FM in June 2005 and has been broadcasting at 103.1 FM for the last two years.

The recent addition of a translator at 93.5 FM in Bettendorf now makes it possible for many more people to have access to programming from Relevant Radio from the time they get in their car in the morning until they get to work and back again, he said.

“Catholic radio has great benefits, including the opportunities that listening has to inform and educate you in the faith,” Tarpey said. “If people would consider turning off secular radio music and news and turn on Catholic radio, they would open themselves up to that and grow in their faith at the same time.”

Making Catholic radio available is also a good way to evangelize, he told The Catholic Post, since people spend so much time in their cars.

“This is a great outreach . . . promoting the faith and the beauty of it and the truth of it,” Tarpey explained, noting that there are only so many people any one person can reach. “With Catholic radio, many more can hear it.”

When KTJT started broadcasting, the goal was to reach 300,000 people and now the station’s reach extends as far as Geneseo and Andalusia, as well as areas south of the Quad Cities. It continues to air programming from Relevant Radio because “they tap into the best that’s out there.”

That includes programs from EWTN, such as “The World Over,” Tarpey said.

Dependent on private donations to pay its bills for expenses like tower rental and electricity, as well as the license for the new translator, KTJT operates with a volunteer staff. Bishop Martin J. Amos of the Diocese of Davenport and Bishop Daniel R. Jenky, CSC, of the Diocese of Peoria have been supportive of the effort, but neither has been asked to provide funding.

Tarpey said they’re looking for ways to build a more sustainable base, such as sponsorships from Catholic businesses in the area, so the station can expand into digital technology and add programming. Another goal is to make Catholic radio an integral part of parish life on both sides of the Mississippi by running public service announcements of upcoming events.

“That requires us to have someone who can get to that venue and help them put together a concise announcement and get it to the radio station. With volunteers it’s challenging to do that, so we haven’t reached out as much as we would like to in the community to do those things,” he said.

Despite the challenges, the group behind KTJT is committed to making certain Catholic radio will be available for a long time to come.

“There’s such a promising harvest out there,” Tarpey told The Post. “The Lord says, ‘The harvest is great and the workers are few.’ This is a small thing that I can do in the evangelization of our culture.”

OTHER CATHOLIC RADIO STATIONS IN DIOCESE

Following are other Catholic radio stations heard in the Diocese of Peoria, all carrying programming from EWTN Radio:

A member of Covenant Network Catholic Radio, WRMS 790 AM in Beardstown is also an affiliate of the EWTN Global Radio Network and can be heard in Rushville, Macomb, Hamilton, Warsaw and Carthage.