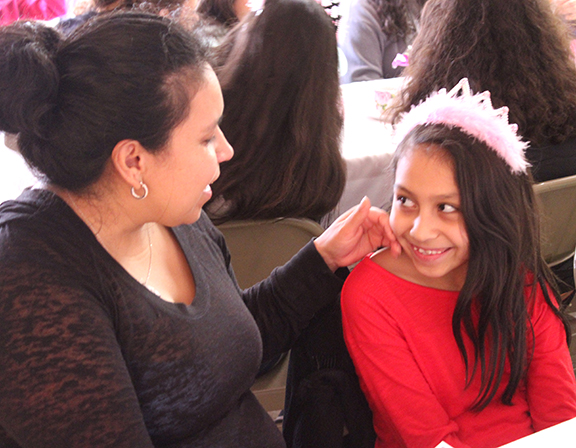 DEPUE — Giving an iPhone 7 to someone who has never used a smart phone is going to leave them confused and using only the most basic functions. To use it wisely and in the way it was intended, they need to learn what they have.

The gift of fertility is the same and more than 80 mothers and daughters in the DePue and LaSalle areas accepted the invitation to talk about that at a Mother-Daughter Tea sponsored by the Respect Life Ministry of the Diocese of Peoria. It was hosted by St. Mary Parish in DePue. 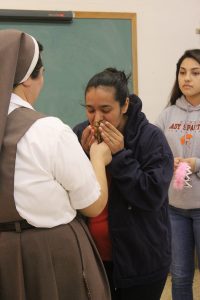 Similar to the program that was held last May at the Spalding Pastoral Center in Peoria, the tea is believed to be the first event of its kind presented in Spanish.

In addition to sharing tea, breakfast and sweet breads, the mothers and daughters received information about the biological changes the girls could expect, which was presented by Dr. Elizabeth Cox of the OSF Women’s Health and Advanced Fertility practice at the Center for Health in Peoria. Sister Isabel Romero, SCTJM, also discussed why the vocation to womanhood is a great gift that must be cherished.

“God didn’t create us because he needed it. He chose to do it, but he chose to create us as a woman and that makes a difference,” she told them. “The difficulty of our times is that we don’t know what our real call is.”

While many are calling for equality with men, to be truly feminine means to be truly a woman. Sister Isabel said “feminine genius” asks women to use the tools God has given them to give and receive life — whether or not that entails motherhood.

“We are called to receive the love of the Lord and everything that he gives us and with that we bear fruit,” she explained.

Sister Isabel reminded the girls that even though they have many choices to make and their parents are not able to enter every area of their lives, such as their phones, their computers and their relationships at school. It is their task now to protect their treasure, which is their body and soul.

“You cannot separate that,” she said. “Your bodies will begin to develop, but your souls will grow, too. . . . You are growing as a mature child of the Lord, so your heart needs to expand so you will be able to love and serve the Lord.” 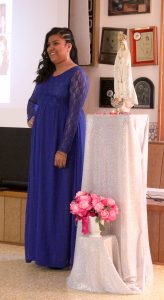 Kaylee Trinidad of St. Mary Parish in DePue beams as she provides an example of how to dress stylishly while remaining modest at the Mother-Daughter Tea. (The Catholic Post/Jennifer Willems)

Each family received a rosary designed by the Servants of the Pierced Hearts of Jesus and Mary as part of the community’s “Every Life is a Gift” campaign. They were blessed by Bishop Daniel R. Jenky, CSC.

Before giving the rosaries to the girls, Sister Isabel told them that they are now mature enough to accept praying for other people and the gift of life as their ministry.

The young women were also treated to a fashion show, with Kaylee Trinidad and Melanie Trinidad of St. Mary Parish in DePue acting as models. Sister Marina Ramirez, HSCP, led the discussion about how it was possible to dress modestly and still have style.

As part of the day, the mothers shared with their daughters what gifts they brought to the family, while the daughters were encouraged to tell their mothers what they admired about them.

Before they left, everyone recited the prayer of consecration to the Immaculate Heart of Mary and the girls received tiaras as “princesses of Mary, Queen of Heaven.”

“It’s nice to have help explaining this,” she said. “Sometimes it’s not easy.”

EDITOR’S NOTE: More photos from this event will be posted to The Catholic Post’s site on Facebook.