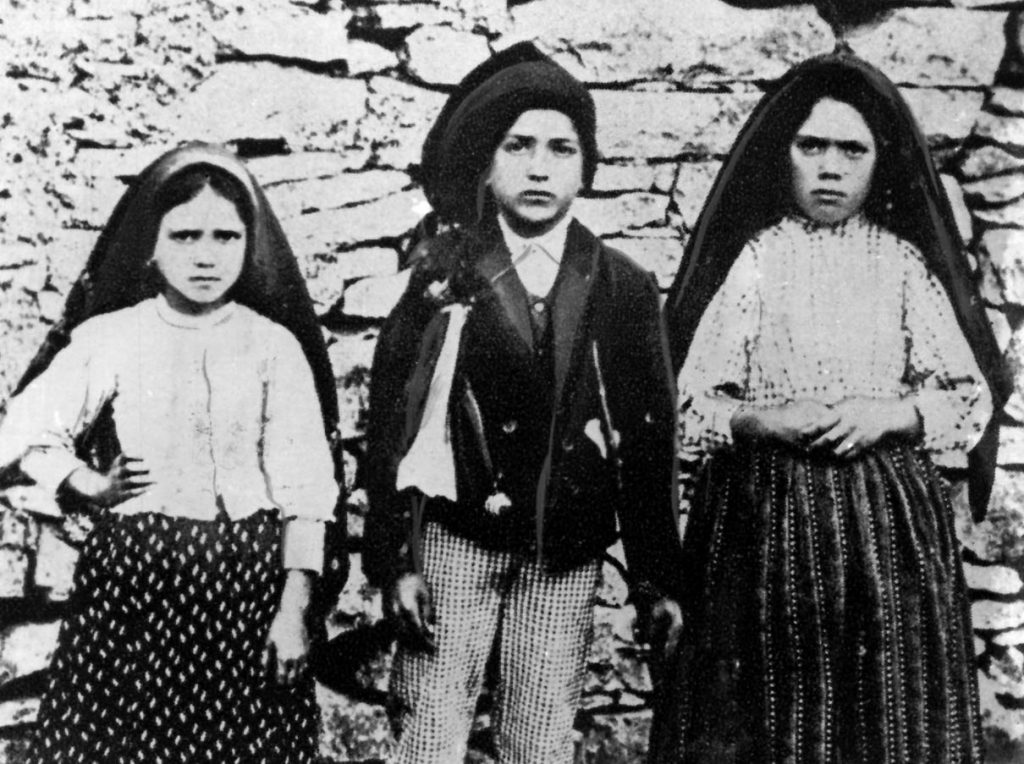 Jacinta and Francisco Marto are pictured with their cousin Lucia dos Santos (right) in a file photo taken around the time of the 1917 apparitions of Mary at Fatima, Portugal. Pope Francis has approved the recognition of a miracle attributed to the intercession of two of the shepherd children, thus paving the way for their canonization. (CNS file photo)

VATICAN CITY (CNS) — Pope Francis has approved the recognition of a miracle attributed to the intercession of two of the shepherd children who saw Our Lady of Fatima in 1917, thus paving the way for their canonization.

Pope Francis signed the decree for the causes of Blesseds Francisco and Jacinta Marto during a meeting March 23 with Cardinal Angelo Amato, prefect of the Congregation for Saints’ Causes, the Vatican said.

The recognition of the miracle makes it likely that the canonization ceremony for the two children will be scheduled soon. The cardinals and bishops who are members of the congregation must vote to recommend their canonization and then the pope would convene the cardinals resident in Rome for a consistory to approve the sainthood.

Many people are hoping Pope Francis will preside over the canonization ceremony during his visit to Fatima May 12-13.

The pilgrimage will mark the 100th anniversary of the Marian apparitions, which began May 13, 1917, when 9-year-old Francisco and 7-year-old Jacinta, along with their cousin Lucia dos Santos, reported seeing the Virgin Mary. The apparitions continued once a month until Oct. 13, 1917, and later were declared worthy of belief by the Catholic Church.

A year after the apparitions, both of the Marto children became ill during an influenza epidemic that plagued Europe. Francisco died April 4, 1919, at the age of 10, while Jacinta succumbed to her illness Feb. 20, 1920, at the age of 9.

Francisco and Jacinta’s cause for canonization was stalled for decades due to a debate on whether non-martyred children have the capacity to understand heroic virtues at a young age. However, in 1979, St. John Paul II allowed their cause to proceed; he declared them venerable in 1989 and beatified them in 2000.

Their cousin Lucia entered the Institute of the Sisters of St. Dorothy and, later, obtained permission to enter the Carmelite convent of St. Teresa in Coimbra, where she resided until her death in 2005 at the age of 97.

Following her death, Pope Benedict XVI waived the five-year waiting period before her sainthood cause could open. Bishop Virgilio Antunes of Coimbra formally closed the local phase of investigation into her life and holiness Feb. 13, 2017, and forwarded the information to the Vatican.

The pope also approved the bishops’ and cardinals’ vote to canonize two Brazilian priests — Blessed Andre de Soveral and Blessed Ambrosio Francisco Ferro — as well as Mateus Moreira and 27 laypeople, who were killed in 1645 as violence broke out between Portuguese Catholics and Dutch Calvinists in Brazil.

Pope Francis also approved the vote to canonize three young Mexican martyrs, known as the child martyrs of Tlaxcala, who were among the first native converts in Mexico. Known only by their first names — Cristobal, Antonio and Juan — they were killed in 1529 for rejecting idolatry and polygamy in the name of their faith.

In addition, Pope Francis signed a decree recognizing the martyrdom of Franciscan Claretian Sister Rani Maria Vattalil, who died in 1995 after being stabbed 54 times, apparently because of her work helping poor women in India organize themselves. With the signing of the decree, a date can be set for her beatification.