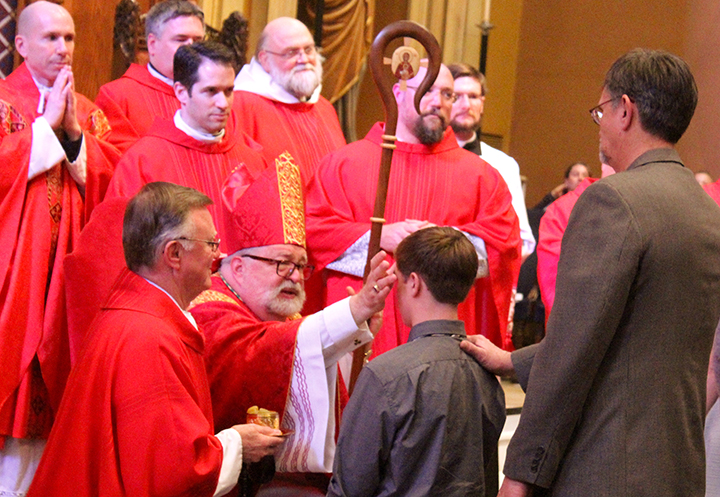 Bishop Jenky anoints Alex Butterfield of St. Mary of the Woods Parish in Princeville during a "cathedral confirmation" March 19 that drew 80 confirmands from 15 parishes. Standing behind Alex is his grandfather and sponsor, Roger Feucht. The two were baptized on the same day in 2003 during the Easter Vigil liturgy at the Princeville parish. (The Catholic Post/Jennifer Willems)

PRINCEVILLE — As grandfather and grandson, Roger Feucht and Alex Butterfield share a love for Alaska, the outdoors and fishing. As brothers in Christ, they share a much deeper connection.

Thirteen years ago, they were baptized at the Easter Vigil at St. Mary of the Woods Church here. They shared another special moment last Sunday, when Alex knelt before Bishop Daniel R. Jenky, CSC, to be confirmed with Feucht’s hand on his right shoulder.

“My mom wanted me to pick someone special. My grandpa’s done a lot for me,” Alex said, explaining his decision to ask Feucht to be his confirmation sponsor. 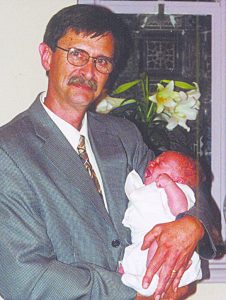 Then and now: Roger Feucht holds baby Alex Butterfield after the Easter Vigil at which they both were baptized in 2003 . . .

“We thought maybe he’d pick someone closer to his friends’ parents’ age, but he wanted Dad. That was it,” said Christina Butterfield, Alex’s mother and Feucht’s daughter. “They’ve always been close.”

The Princeville parish was one of 15 represented at the confirmation liturgy at St. Mary’s Cathedral in Peoria on March 19. Eighty teens, including the seven from Princeville, came forward with their sponsors to be anointed by the bishop and greeted by their confirmation names.

An eighth-grader at Princeville Junior/Senior High School, Alex plays shortstop and covers centerfield and second base in the fall and is involved in a traveling baseball league in the summer. It was no surprise, then, that the confirmation name he chose was Sebastian, after the patron saint of athletes and archers. 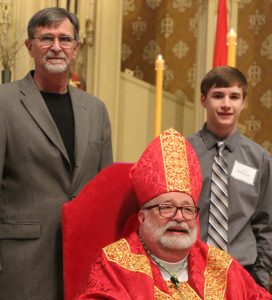 . . . and with Bishop Jenky on March 19 after Feucht served as Alex’s confirmation sponsor during a liturgy at St. Mary’s Cathedral in Peoria (The Catholic Post/Jennifer Willems)

Feucht said it was “pretty special” to be baptized at the same time as his grandson, but “because he picked me for this, it’s probably a step above that.”

Raised in a church that focused on the Bible, he would accompany his wife, Lynn, to Mass every week, but didn’t feel called to be received into the Catholic Church. Then his grandchildren started to ask, “Grandpa, why don’t you go to Communion?”

Soon he found himself visiting with Msgr. Richard Soseman, then pastor, once a week and said their discussions about the Bible were lively.

“Then this guy came along,” Feucht said with a chuckle, pointing to Alex. “When the time came and this happened it was kind of neat.”

Feucht farmed for 21 years and has been an experimental mechanic with Caterpillar Inc. since 1994. With his time off, he has taken his grandchildren, one at a time, on vacations to California and Alaska to fish, hike and just grow closer as family.

His trip with Alex two years ago is obviously a fond memory for both of them. Now they have another to add to their family album.