BLOOMINGTON — Central Catholic High School’s Joey Malinowski makes a lot of tackles on the football field, but his biggest target knows no season.

Joey is doing his part to bring down childhood cancer.

For his creativity, drive, and compassion in becoming a leader in the “Kick-It” fundraising campaign for childhood cancer research, the Central Catholic junior is the Illinois High School Association’s nominee for the National High School Spirit of Sport Award. 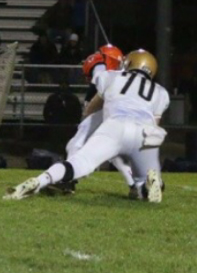 Through his “Joey’s Tackles for Cancer” campaign, people pledge money for every tackle the Saints’ No. 70 makes. (Provided photo)

“It’s a pretty big honor,” admits Joey, who knew little about it prior to being selected last month from among 40 nominees in the state. He is now under consideration for the top national prize.

Sports has always been a big deal for Joey and his family. His father, Jim, played football professionally in Germany and has been an assistant coach at Central Catholic for more than 25 years. His older sister, Maddie, is a member of the Saints’ basketball team that just finished second in the Class 2A state tournament and will play volleyball next year at Lincoln College.

And Joey this year was named to all-Corn Belt Conference teams as a lineman on both offense and defense. Like his father, he particularly excels as a long snapper — a specialty position on kicking and punting teams — and is nationally ranked among the Top 12 high school players in his class at that position.

All that is impressive, but the Spirit of Sport Award requires something more. And Joey Malinowski has that something.

How to help: Gifts or per-tackle pledges to fight childhood cancer are accepted year-round at the “Joey’s Tackles for Cancer” site.

His junior year at Central Catholic will be remembered as the time he began “Joey’s Tackles for Cancer,” which to date has raised more than $8,000 — good for fourth place nationally among individual “Kick-It” fundraisers. Working with his family and the school, he recruited pledges for every tackle he made in the 2016 season. He wound up with 57, meaning the player who wears jersey No. 70 surpassed his goal of $7,000.

Joey learned about “Kick-It” while attending the Kohl’s Kicking and Snapping Camp in Wisconsin last July. Normally, football players raise funds per kick or punt. Joey received permission to amend it to per tackle. 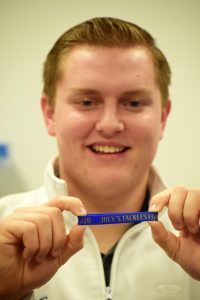 Joey Malinowski holds a wristlet he gives to all who pledge to his fundraising campaign. It reads: “Joey’s Tackles for Childhood Cancer/Saints #70.” (The Catholic Post/Tom Dermody)

Always quick to volunteer — he is an altar server at Holy Trinity Parish and assists at the parish food pantry — Joey’s decision to take part in “Kick-It” was cemented when two of the presenters at the summer camp, Nebraska punter Sam Foltz and Michigan State punter Mike Sadler, were killed in a single-car accident driving home from the camp.

“I realized we only do have a certain amount of time,” said Joey, who believes God led him to the camp so he could learn about the project and then act upon it. “We don’t know how long it is.”

And Joey knows his life is blessed.

“I’ve got a lot of nice things in my life,” he said. “I’m very blessed I can go to this nice of a school. I can learn about my faith every day, in class every day. There are people out there who don’t have the opportunities I do.”

Cancer can take away those opportunities, like the ability to play sports.

Through his fundraising efforts, Joey learned about a 12-year-old athlete in suburban Chicago, Joe Moylan, who is battling leukemia. The two Joe’s struck up a long-distance bond.

“Every week before the game I would text him, ask him how he’s doing, tell him I was praying for him, tell him I was going to play for him that night,” said Joey. At Mass on the morning before games, he would especially pray for his young friend who is “going through something I would not want put on any kid.”

“After the game I’d tell him how I did, how we did, and how much money we’d raised so far,” continued Joey, adding happily that young Joe is “doing better.”

During the season, Joey and his football linemen Saint teammates wore orange wristlets that said “Joe’s 2tuff for Leukemia.” At his interview with The Catholic Post, Joey wore a blue wristlet that said “Joey’s Tackles for Childhood Cancer/Saints #70.”

“I handed these out to everyone who helped me this past year,” he said.

He’s already set a goal of raising $10,000 in his senior season. Those who know him would never underestimate the 6-1, 230-pounder with an even bigger heart.

“He genuinely desires to serve others and he is a strong leader in our school,” said Sean Foster, principal of Central Catholic. “I’ve been most impressed with how humble Joey is despite the many gifts and talents he’s been given.”

“When he sets his mind to something, he works extremely hard to get it accomplished,” said Moews. “Central Catholic does a great job instilling in the students a sense of service and charity, and Joe’s actions represent his family, school and faith in such a positive way.”

Perhaps the proudest are Joey’s parents, Jim and Jenny.

“The pride we have is equal for all three of our children and the young adults they have become,” said Jim Malinowski, noting their youngest, Timmy, is in eighth grade at Corpus Christi School. He called Joey “extremely passionate about everything he does.”

“The passion around the goals he sets, regardless if it is training for a sport, participating in a sport, studying, or raising money for childhood cancer research — he is going to give all his effort,” said Joey’s father.  Joey’s “huge impact” in raising awareness of childhood cancer with friends and family is an example of “how the words and actions of the Lord are being put into action by a 16-year-old.”