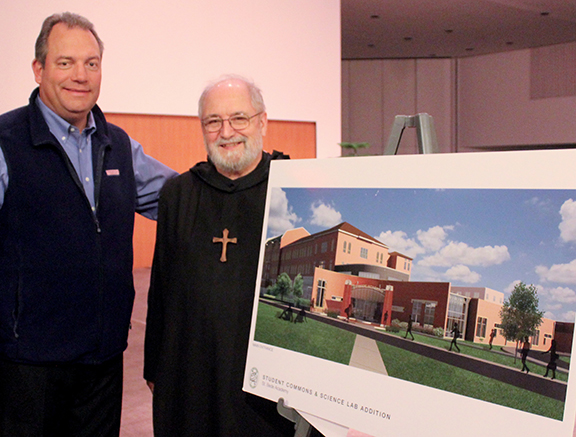 PERU — It took more than 10 million bricks to build St. Bede Academy and they’re about to get some company.

During three information meetings last week, officials at St. Bede Academy announced plans to build a new Science Center and Student Commons, with work starting as early as June 1. The estimated cost is $5.5 million and a little more than half the funding has been secured, according to Matt McGinnis, director of the Legacy Project and a 1985 graduate of St. Bede.

The architect is StudioGC from Chicago and the contractors are Vissering Construction Company from Streator and JB Contracting Corp. from LaSalle.

This is the north elevation of the proposed Science Center and Student Commons at St. Bede Academy in Peru. (Provided photo)

McGinnis outlined two more phases in the Legacy Project, one of which will see construction of a field house to the east of the current gymnasium. The final phase includes renovating classrooms in the existing school building, putting in a new kitchen and installing energy-efficient windows and new doors.

The total cost of the project, which is expected to take about three years, is between $14 million and $15 million.

“I think what really excites me is that it’s a way in which we’re going to make it possible to continue to have a significant influence in the local area,” said Abbot Philip, spiritual leader of the Benedictine community at St. Bede Abbey. “I think it’s going to enable us to attract students and continue to move forward.”

It will benefit the community in another way, he said.

“One of the main parts of our mission is spreading the faith and that’s something we really need to be able to do in this area,” Abbot Philip explained. “One of the main ways is through the school.”

The 16,000-square-foot Science Center and Student Commons will give the school three state-of-the-art laboratories for education in physics, biology and chemistry. Each will be about 1,400 square feet and have dedicated classroom and lab areas, along with plenty of storage.

Another highly anticipated feature is a collaborative learning laboratory, which will allow the faculty to work together and do team teaching, said Ron Groleau, a member of the St. Bede board and longtime dean of the Natural Sciences Department at Illinois Valley Community College. He chaired the committee that oversaw the design of the Science Center.

“The way the curriculum is going to change is we hope to have an integrated learning module each year,” he said, which would give students an opportunity to advance across all the disciplines.

Groleau pointed out that there would be a science courtyard for learning activities and experiments, and a conference room that can be used by faculty as well as students.

“We envision a lot of our student organizations being able to hold their meetings in this facility,” he said.

At about 1,500 square feet, the Student Commons will provide space for studying independently and collectively. It would also give students a place to socialize and the academy a place to hold large events, such as the eighth grade open house and lectures, or to display student artwork, McGinnis said.

The entrance to the Science Center and Student Commons will be located behind the new Gateway Arch, funded by St. Bede’s Class of 1964 and dedicated in 2014. This will also be the new student entrance to the school.

McGinnis said it was more cost efficient to build something new, rather than try to retrofit the existing labs.

“And they’re spread out all over the school — one is on the second floor, one is on the first floor and one is in the basement,” Abbot Philip said.

Science will play an important role in heating and cooling the addition, too. Plans call for installing 14 wells at 500 feet deep so the school can use geothermal technology, which is also more cost effective.

Dr. Ted Struck, superintendent of St. Bede Academy, said the new addition should be ready for occupancy at the start of the 2018-19 school year.

The third phase of the Legacy Project would give St. Bede Academy a 15,000-square-foot field house that will add basketball and volleyball courts, as well as batting cages, pitching mounds and wrestling mats.

He explained that the additional practice facility would offer the student athletes a better balance between school and their life outside St. Bede, since they wouldn’t have to wait so long for a space to open up.

The lower level of the main gymnasium will be renovated to include new locker rooms, a weight room and a training room.

Plans are still being finalized for this phase and are subject to change. McGinnis said they would like to be able to start construction on the field house after school is out in May 2018.

A major benefactor has stepped forward and is covering many of the costs for this phase.

The final phase is expected to flux based on what needs are perceived once the Science Center and Student Commons and new field house are in use.

All of this follows work that was done in 2014 to bring the 125-year-old school up to safety standards, Struck said. That included installing a communications system, a new fire alarm system and sprinklers throughout the building.

He said with each step they are assuring the alumni, “We’re not tearing down your building. We’re keeping your building.” And there’s no reason to tear it down, he told The Catholic Post.

“The building is built on bedrock,” Struck said. “Whoever sited it was either brilliant or blessed by God. My guess is the second.”