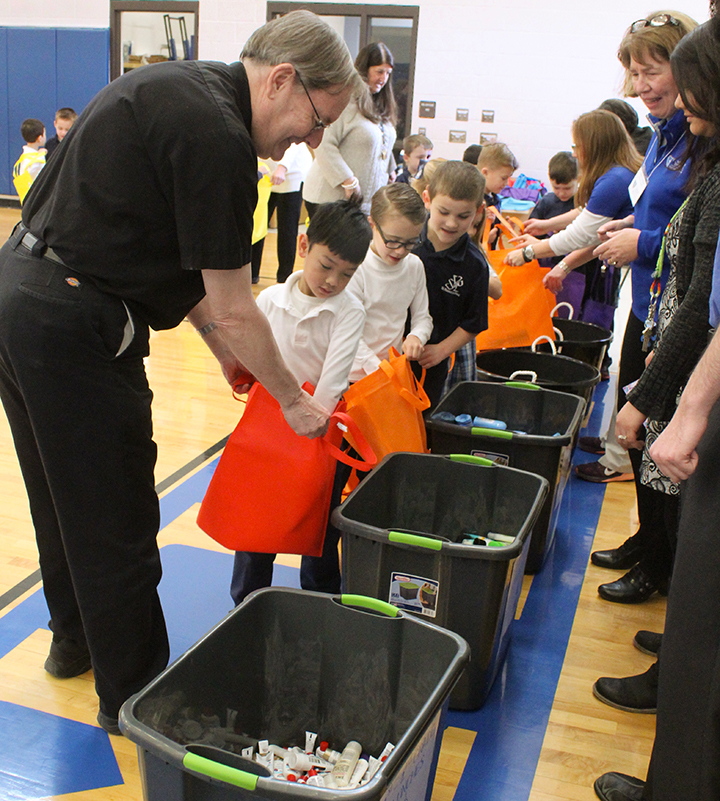 Most of the students at St. Vincent de Paul School in Peoria will never know what it’s like to be without soap, shampoo or a toothbrush, and they don’t want anyone else to know what that’s like either.

As Catholic Schools Week came to an end, each of the school’s 300 students filled a colorful bag with toiletries for the homeless women and children at Dream Center Peoria. In addition to the shampoo, conditioner, comb, soap, lotion, deodorant, and toothbrush and toothpaste, they slipped an encouraging note into the bag and said a prayer for the person who would receive it.

Second-grader Kristen Olsen said it was important for her to take part in the service project so that “people who don’t have as much money or stuff as we do get what they need.” On her card she drew a tree and a bird, and assured the recipient of her prayers. 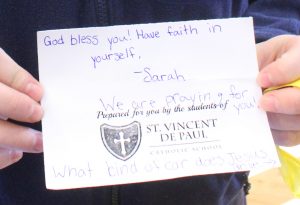 “God bless you! Have faith in yourself. We are praying for you,” wrote Sarah Wertz in the encouraging note she tucked into the bag she prepared. (The Catholic Post/Jennifer Willems)

Sarah Wertz, a sixth-grader, just wanted to make the person who would receive her bag feel happy. “I wanted to let them know that people are thinking of them,” she told The Catholic Post.

Each class was responsible for one toiletry item, with the goal of collecting between 300 and 350 so there would be enough for every student to fill a bag, according to Nicole Jones, a seventh grade parent and member of the St. Vincent de Paul Society who assisted with the project. They ended up with an abundance and some classes supplied as many as 500 of their assigned item.

Jones said the bags were larger than necessary for the toiletries so the recipient could carry clothing or other items with them.

Located in the heart of the city, Dream Center Peoria was chosen because it is the only shelter for homeless women and children in the area, she explained. There is also a program to help people transition from homelessness, and the Hope Store, which serves the poor in the vicinity as well as those at the facility.

“Often it’s the parents who do the giving for these projects, which is beautiful, but we really wanted to connect the child to the individual,” said Sarah Hogan, director of religious education at St. Vincent de Paul Parish. “That’s why we asked them to pray and make a personalized card. Not only are the parents donating, but the children are giving of themselves, too.”

She added that the bags could have been filled by volunteers after school, but having the students do the work gave them a sense of ownership and brought the school together.